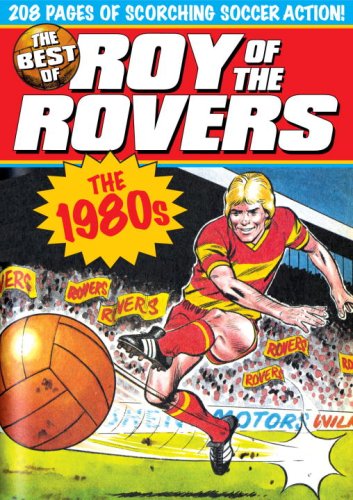 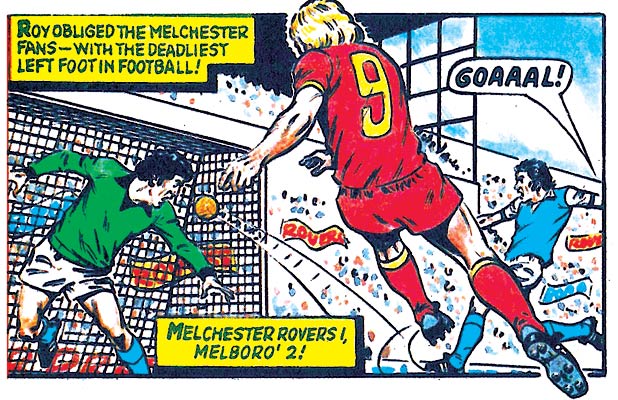 There was a time when comics in Britain, and everywhere else, reflected the broad interests of a much larger proportion of the youthful population, and when adults kept their bizarre reading habits a closely guarded secret.

Tiger was a weekly anthology comic launched in September 1954, and for most of its 1,555-issue run it was simply the comic with Roy of the Rovers.

Created by Frank S. Pepper and drawn by Joe Colquhoun sharing the pseudonym Stewart Colwyn, Roy was actually scripted for much of his early career by the comic’s editor Derek Birnage (although credited to Bobby Charlton for a couple of years). A little slower and far more fanciful than real-time, the strip progressed tirelessly until in 1975 when ageless Roy became player-manager and the following year was promoted into his own weekly comic, just in time for the 1976-77 season. It ran for 855 issues to March 1993.

Roy Race started as an apprentice at mighty Melchester Rovers, and after many years of winning all the glories the beautiful game could offer, settled down to live the dream: wife, kids, wealth, comfort and sporting glory every Saturday.

This celebratory volume cherrypicks the fruitful period September 20th 1980 to 4th June 1982, when Roy’s comic was regularly selling a million copies a week. The stories were always much more than simply “He shoots! He’s scored!!!” formulaic episodes: they’re closer to sports-based TV dramas of later decades like Dream Team (litigiously so, in some cases).

Included in this tome are Melchester’s worst season ever when the team is knocked out of the FA Cup and even relegated, only to fight their way back to the top flight despite such distractions as spoilt-brat players, a TV company making a serial about the club and even Roy’s wife leaving him. Also on view are Roy’s attendance of the wedding of Prince Charles and Lady Diana, and a dramatic sequence of events following the attempted murder of the indomitable player-manager. The mystery of ‘Who Shot Roy Race’ mirrored the ‘Who Shot JR?’ furore generated by TV soap Dallas, although with a far more logical conclusion.

Old football comics are never going to be the toast of the medium’s critical glitterati, but these were astonishingly popular strips in their day, and produced for maximum entertainment value by highly skilled professionals. They still have the power to enthral and captivate far beyond the limits of nostalgia and fashion. If your footy-mad youngster isn’t reading enough, this might be the cunning tactic to catch him or her totally offside.

A companion volume takes us back still further to the sideburns and resolutely British Melchester Rovers of the 1970s.