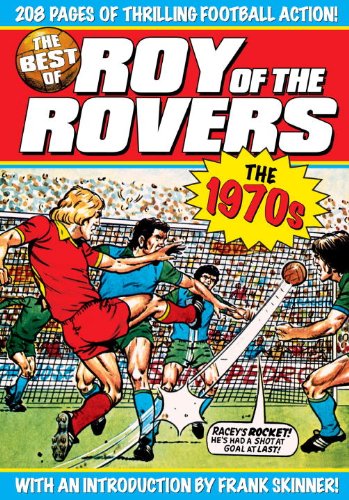 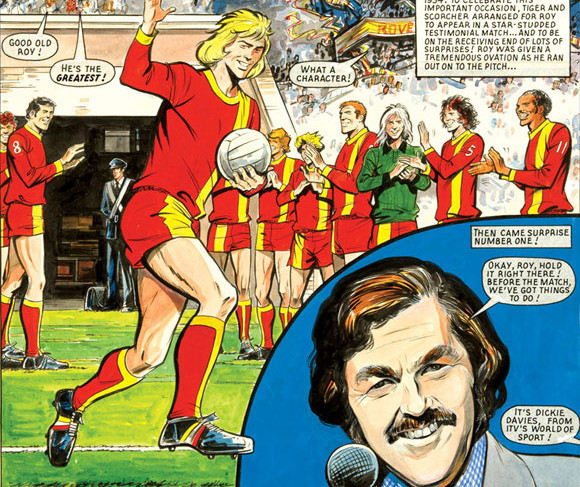 Created by Frank S. Pepper as Stewart Colwyn and drawn by Joe Colquhoun, Roy of the Rovers began in 1954 as lead feature of Tiger, a new weekly anthology dedicated to sporting strips.

Footballer Roy started as an apprentice at mighty Melchester Rovers, and after many years of winning all the glories the beautiful game could offer, settled down to live the dream: wife, wealth, comfort and triumphant adulation every Saturday. In 1976 evergreen Roy won his own weekly comic that ran for 855 issues, until 1993. This glossy oversized paperback reprints the first issue and selects from material  through to June 1979.

Weeklies have a tremendous advantage when it comes to staying topical. The gap from draft script to issue-on-sale can be as little as six weeks. This meant that with a judicious eye to the upcoming events diary, a strip can comfortably lock into big public occasions and even short-lived crazes. Writer Tom Tully made full use of contemporary headlines and concerns to spice up the action. With solidly reliable David Sque handling the full-colour artwork, they dealt with burning issues of the era such as too much money, too little money, the burgeoning transfer market (“£60,000 for a striker!”) and even the Rovers’ first international purchase.

One word of warning: although the artist has endeavoured to keep most of the era’s fashion atrocities to a minimum, this is a book overflowing with the tonsorial travesties that typified the “Age of Mullets” so if you’re of a nervous disposition…