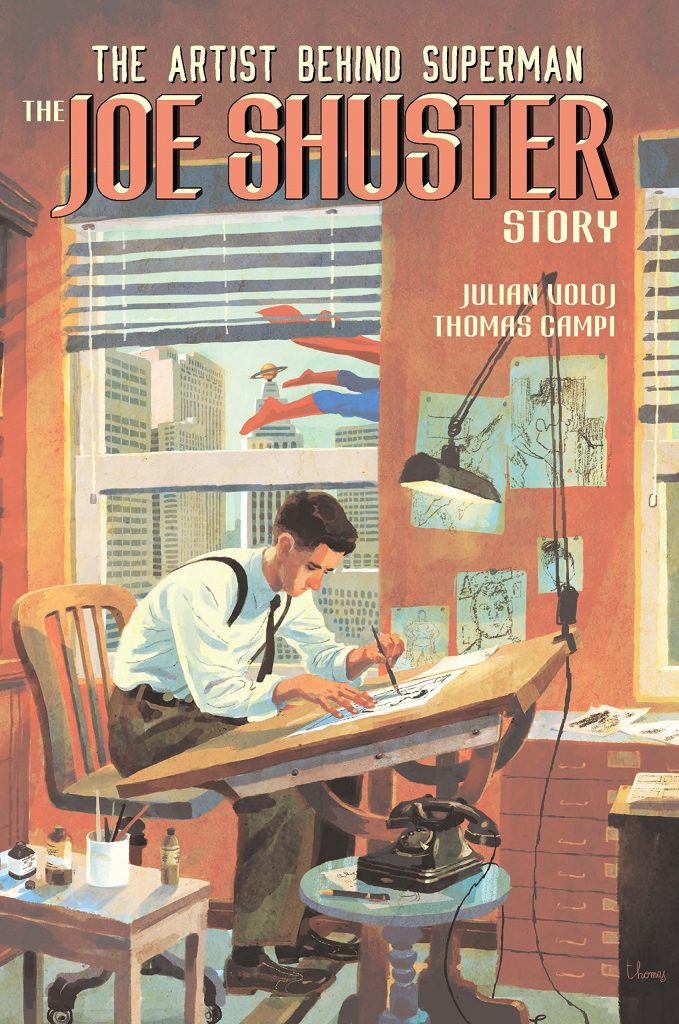 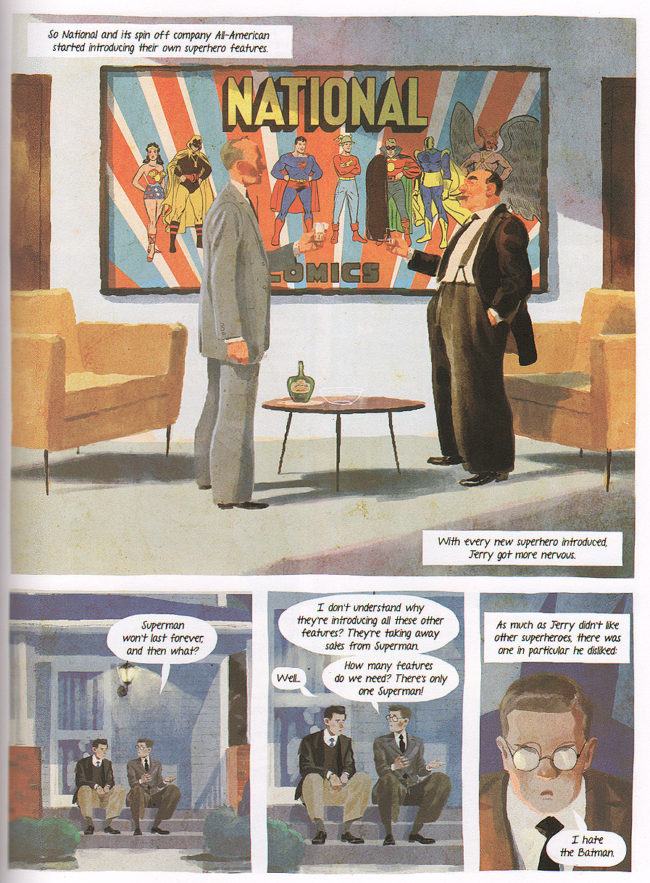 True to the title, Joe Shuster was the artist half of ‘Siegel and Shuster’, creators of Superman. This could have been a joint biography, but Joe offered a powerful narrative hook, asking why the co-creator one of the most lucrative fictional creations ever sleeps on a park bench as a Superman film is being produced?

Add to this writing partner Jerry Siegel, and their creation Lois Lane, ‘talking to’ the sleeping Joe, and it’s a strong start to this “meticulously researched”, but fictionalised biography. Joe’s woken by a cop, who kindly takes him for some food and prompts him to tell his story.

That story starts with Shuster’s grandparents in Eastern Europe, before fleeing Anti-Semitic pogroms, a common story of real 1930s comics pioneers notably fictionalised in Kavalier & Clay. Writer Julian Voloj then briskly runs through Shuster’s childhood love of newspaper comics, his desire to become an artist, his partnership with aspiring writer Jerry Siegel, and their attempts to break into the emerging comic industry. This eventually results in success, when they sell Superman. The cheques roll in, Superman becomes a massive hit, and surely they have it made… ?

However, this is a rise and fall story with selling Superman as the mid-point peak. Readers itching to see the creation of Superman may feel the first half drags, though we’re teased with tidbits like the names of their colleagues at the school newspaper including a Mister Kent, and a beautiful Lois. When Joe meets Jerry we’re drawn into their shared pop-cultural interests, notably pulp magazines (the immediate antecedents of Superman), and their path, through letter writing, fandom, student newspapers, and submission-after-submission with incremental success. Most buyers will know the overall story, but many will appreciate new details. How did the duo lose the gig on Superman? The punning reference to Lewis and Clark), and the heartbreak of how Joe loses a romantic prospect also illuminate.

In creating a biography, there’s an inherent tension between truth to intricate details, and page-turning narrative. Voloj balances this well, though occasionally it could have been streamlined towards fiction, for example by conflating numerous editorial staff into one or two. However, it plays out like a satisfying novel or biopic, tying into a major event, and enlisting community support in their fight for justice. Readers may wish to imagine a triumphal soundtrack.

Looking at the stunning art, it’s no surprise that Thomas Campi is an award winning illustrator. He impressed on the ‘not a biography’ of Belgian Surrealist painter Magritte, and applies a similar water-coloured realism here. It’s free from comics’ traditional ink lines, except for the deliberately contrasting framing sequence. The props, sets and costumes (pictured) conjure the period without distracting, and the characters are recognisable from surviving photos, with Campi’s simplified designs appealing, and far more effective than the tell-tale stiltedness of slavish adherence to reference photos. Numerous highlights include visualisations of the stories that the duo read, and Siegel writes, overlaid images of the science-fiction magazines they’re enthusing about and repeated shots of Jerry working over different seasons – with outfits changing from winter wear to underwear.

The Artist Behind Superman, may not excite every Superman fan, but it’s a faithful biography of Shuster, and a satisfying graphic novel. It’s also a history of American comics through the eyes of an insider: Siegel and Shuster’s creation of Superman changed comics, and his creators’ fight for justice changed the industry.