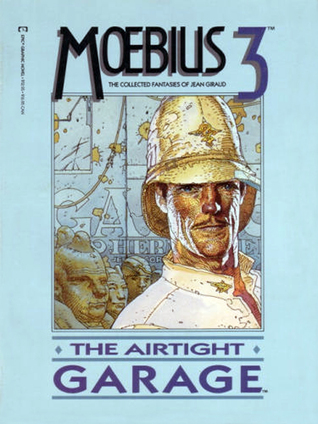 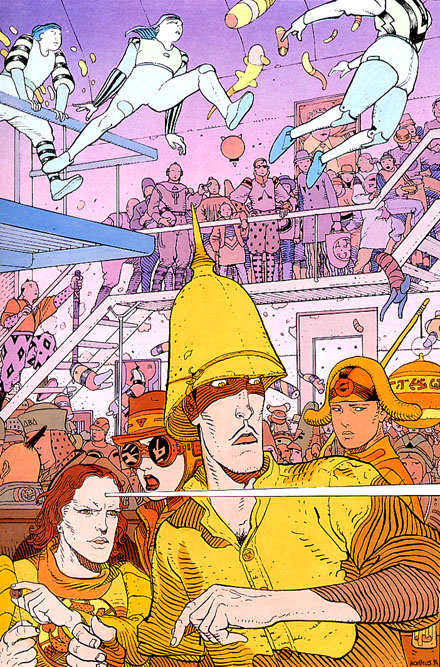 Although originally appearing in 1976 as a serial in the French magazine Métal Hurlant, this loosely-plotted and improvised story by Moebius feels as though it belongs to the 1960s. It features characters from Michael Moorcock’s Jerry Cornelius novels, but perhaps not as prominently as the alternative French title – The Airtight Garage of Jerry Cornelius – might suggest. In the collected edition the title was changed and references to Cornelius changed to Lewis Carnelian due to a copyright misunderstanding.

Drawn in Moebius’ signature airy style combining elements of great detail and extremely skilled dotted line rendering with sweeping clear line landscapes and interiors, its appeal lies more in the mood and sense of otherness it conveys, than in the story per se. Deliberately confusing, the tale is full of contradictions and alternative versions of reality. Although familiar to English-speaking readers in Epic’s often-slated technicolour version, it was originally printed in black and white. Looking at it in both formats brings up some interesting contrasts in reader perception.

In The Airtight Garage Moebius explores the notions of inner and outer space and our perception of reality, in a manner typical of New Wave science fiction, using a style that perfectly reflects the shifting realities depicted. ‘Hermetic’ refers both to the idea of a world sealed within another world, and also the quasi-religious teachings of various historical mystics and secret societies such as The Golden Dawn, who boasted Irish poet and spiritualist W.B. Yeats as a member.

The central character, Major Grubert, is guardian and possibly creator of a series of worlds within worlds, in the constellation Leo, around which he orbits, dealing with intrusions, repelling invasions, or perhaps simply attempts to gain entry to the world or worlds over which he watches – it’s hard to tell exactly what is going on most of the time!

An ideal read for teens of a mystical turn, The Airtight Garage is a wonderful evocation of the mind-bending notions of 1960s philosophy, and a beautiful, compelling series of images that engages with the reader in a way that is very different to most comic books. Inspired by a lack of self-imposed boundaries, Moebius achieves probably the finest artwork of his career in this volume.