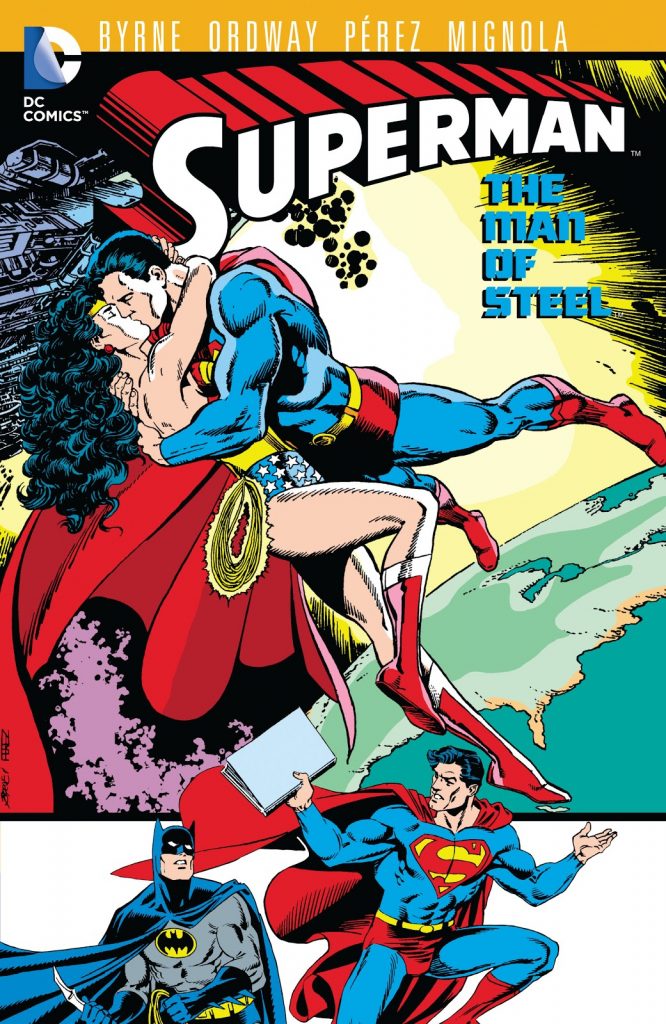 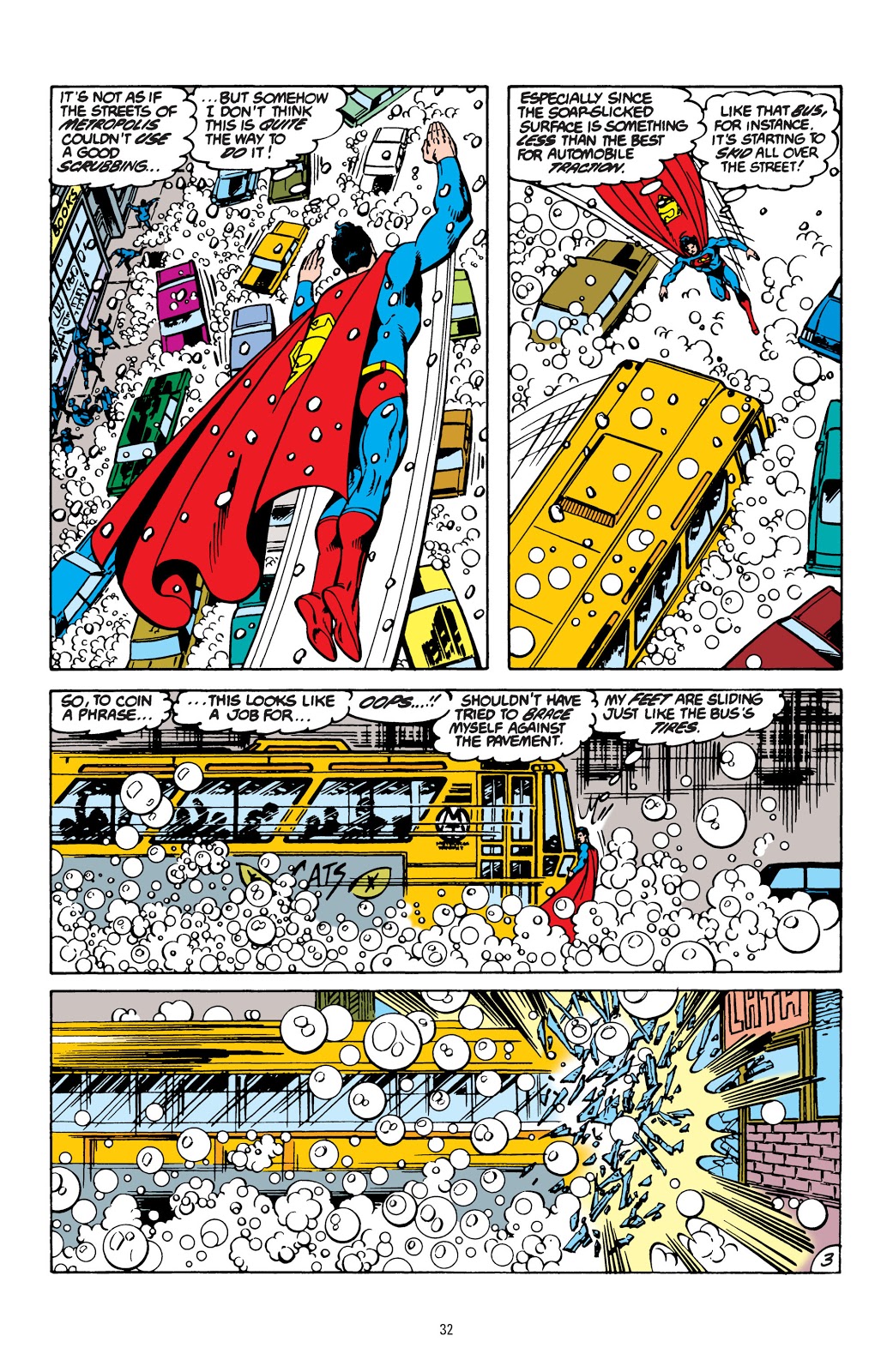 This eighth volume of Superman’s 1980s reboot under the guiding creative hand of John Byrne revisits his continuity over March to June 1988. While Byrne remains primary artist and Jerry Ordway secondary, this collection is notable for a number of other artistic greats, including Mike Migonla, George Pérez, Kurt Schaffenberger and Curt Swan.

DC’s signature super-spy outfit ‘Checkmate!’ starts proceddings courtesy of Byrne and Paul Kupperberg, with Lois Lane facing an Arab terrorist hiding behind diplomatic immunity whilst the Caped Kryptonian is handling the capture of a US nuclear aircraft carrier.

Then Metropolis is plagued by crazy, life-threatening stunts whilst Morgan Edge’s TV station is held hostage by disgruntled employee “Uncle” Oswald Loomis. The wily old entertainer is bemoaning changing tastes and times in ‘He Only Laughs When I Hurt!’, but taking Lois prisoner is no way to put his point across. However this very modern Prankster has more than gimmicks up his sleeve to counter the Man of Action’s swift response. Meanwhile, in Antarctica polar scientists make an incredible discovery…

Byrne and Jerry Ordway have Jimmy Olsen and Cat Grant stumble upon a hidden paramilitary encampment with enough power to cripple the Man of Steel, but when the wounded hero crashes down in Metropolis the doctors treating him can only diagnose that he has been turned into a robot.

The incredible truth behind the ‘Tin Soldiers’ comes quickly, after which evil entrepreneur Lex Luthor returns to bedevil Superman by turning the multifaceted, malleable Metal Men into a lethal weapon composed of ‘Element 126’: a snappy thriller written and inked by Byrne – with the assistance of Keith Williams – and pencilled by legendary illustrator Ross Andru.

Murderous mystic Silver Banshee is still searching for a lost tome of lore and making corpses in the all-Byrne ‘Cries in the Night’. Once again outmatched and at a loss for answers, this time the Metropolis Marvel is saved by a hulking and equally enigmatic Scot named Bevan McDougal who only leaves the hero with more questions.

Maverick inventor Professor Emil Hamilton returns to find the Man of Tomorrow positively giddy at the prospect of meeting again the fascinating heroic newcomer Diana of Themyscira. A semblance of professionalism only resumes after Superman consults with Batman, who has been trying to track the owner of a scrapbook seemingly holding the secrets of the Kryptonian’s childhood. The eventual answer is a breathtaking shock in ‘The Hurrieder I Go’.

May 1988 was the fiftieth anniversary of Superman and to celebrate DC issued an all-new 80-page carnival of delights. Spectacular lead story ‘Different Worlds’ (Byrne and Pérez) at last addressed the obvious chemistry between Superman and Wonder Woman, before the couple team-up for an extended outing.

The war of wills between Maggie Sawyer and Luthor comes to a head in ‘Games People Play’, but not in a way the multi-billionaire would have wanted, whilst Jimmy was ‘A Friend in Need’ (Byrne, Stern, Swan) when a strange malady almost killed his caped pal, dragging the hurt hero deep into the earth where tragic antihero Man-Bat found him delirious in ‘The Dark Where Madness Lies’ from Byrne and Mike Mignola.

This splendid repository of collected comic delights concludes with the incapacitated cosmic orphan undertaking a ‘Return to Krypton’ to experience cosmic wonders and astounding visions of terrifying clarity.

Such cracking superhero tales are a true high point in the Man of Tomorrow’s monolithic canon and these astoundingly readable collections are certainly the easiest way to enjoy a stand-out reinvention. Volume Nine follows. These stories are also available in hardback as Superman: The Man of Steel 4. 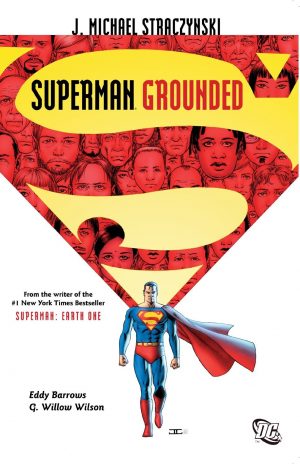