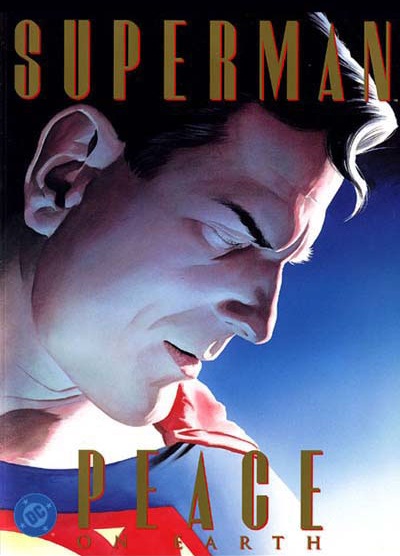 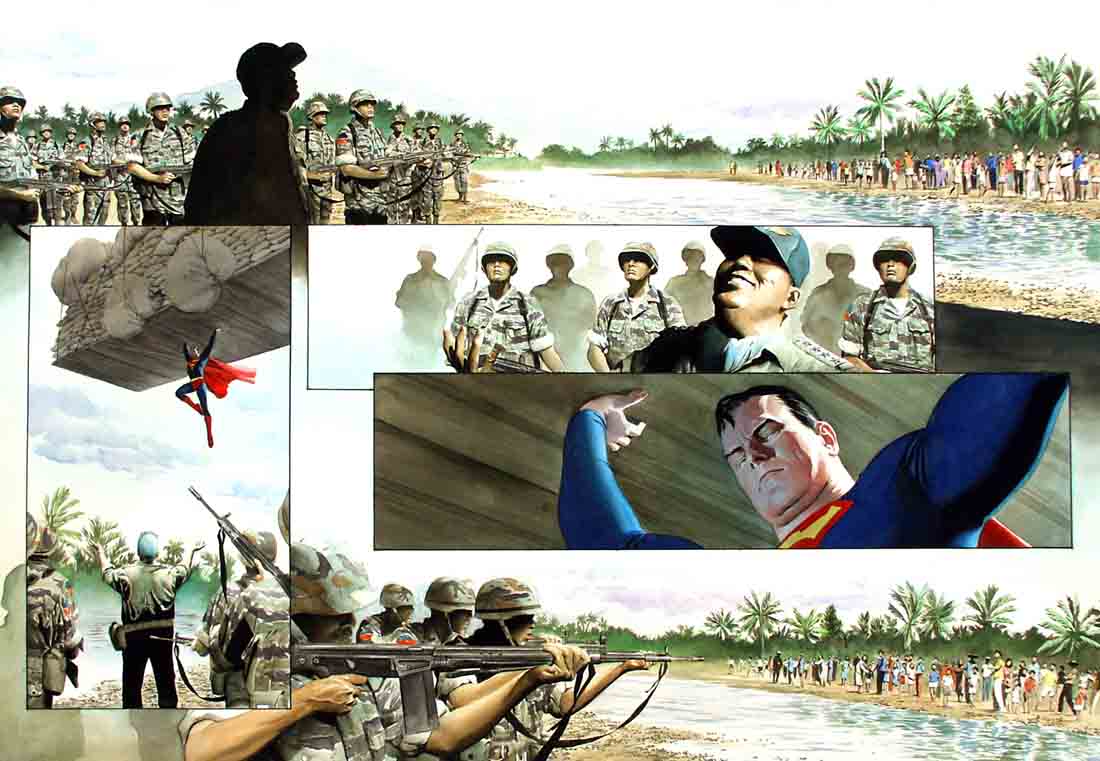 On release Peace on Earth was a much anticipated graphic novel, and one that won an Eisner Award the following year. It boasted an impeccable creative team in painter Alex Ross and Paul Dini, then relatively new to comics having worked the magic of the 1990s Batman Animated show. It was released not in the standard trade paperback format, but an expansive 13.5” by 10” treasury size to better showcase Ross’ glorious painted pages. So, a work with pedigree.

Dini didn’t take the easy route either, choosing to investigate the long-standing question of why Superman doesn’t just put the world to rights given all his power, starting with the crisis of world hunger. Under a poorer writer the subsequent corn-fed homilies that instilled compassion for humanity in the young Superman could come across as so much bunkum, but Dini strikes the right note in contextualising what formed the world’s greatest hero. What follows is the face of real world politics. In most places Superman’s 24 hour mission to feed with world is greeted with gratitude, but then what of tomorrow? Or of oppressors controlling nations and refusing to let their population be fed? This is relatively black and white morality, with Dini posing the questions for each of us to respond to. Could we do more? Dini doesn’t patronise with easy answers, but still produces a heartwarming and optimistic story that chooses to see the best in humanity. Much like Superman himself.

However insightful the script may be, it’s the art that immediately grabs the attention, and continues to amaze until the end. Ross works in figurative brightness, and image after image is memorable and iconic, yet without a super villain in sight. The world looks up to Superman, and Ross illustrates this in literal fashion, time and again picturing him from below, a viewpoint still not commonly used despite the obvious analogy. The story just predates the true digital revolution, and a quiet heartbeat is his depiction of the Daily Planet, still a workplace with paper files in filing cabinets and a photo morgue. Ross’ Clark Kent at work may not be as timeless as his Superman, but he’s also era defining.

Dini and Ross would repeat their formula to diminishing returns involving DC’s other iconic creations, but read in isolation Peace on Earth retains a glow of goodwill to all men. The single downside is one out of the creators’ hands. There’s an awkwardness to the presentation. While produced oversized with the best of intentions, something wasn’t quite right, and instead of pages that turn smoothly they crinkle, bunch and catch in the binding. This was resolved with later presentations in the same format. The choice today’s buyer has is to put up with it, or find Peace on Earth along with other Dini/Ross collaborations in The World’s Greatest Superheroes, where it’s standard trade size. The best of both worlds is the oversized slipcased edition, but that’s now both long out of print and very expensive.