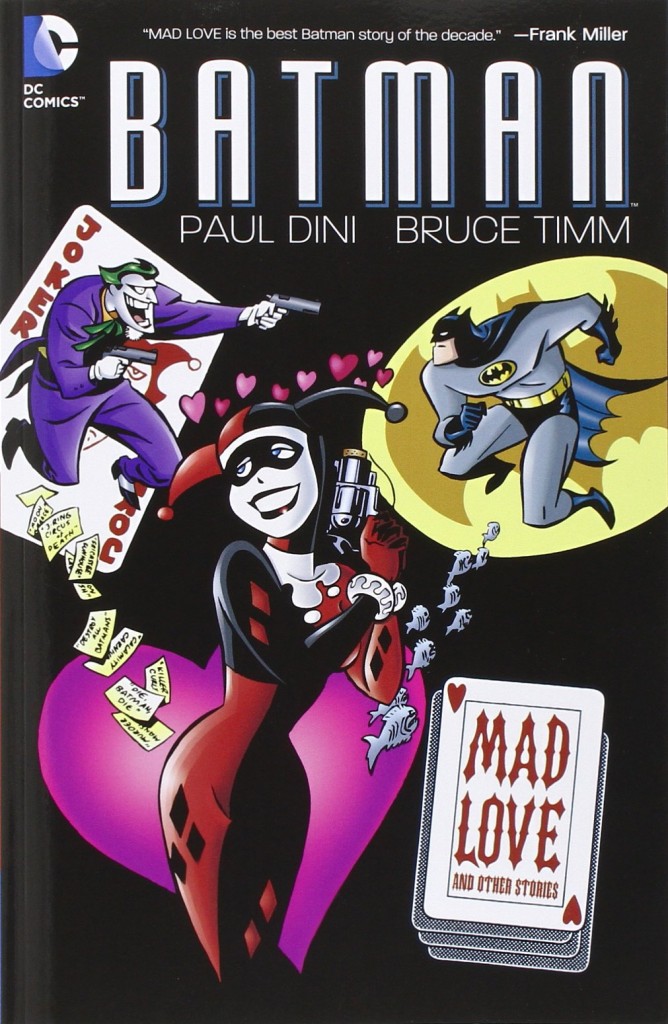 The first item to note is buyer beware. There are two different versions of this book, and not everyone has been happy after buying the deluxe hardback edition. The only comic within is the ‘Mad Love’ story, which is delivered three times, once as the complete tale, once as Bruce Timm’s layout sketches and once as colour guides.

Unless you’re a completist or Mrs Timm, the version to look out is Mad Love and Other Stories, the other stories being further work produced by Paul Dini and Timm in the Batman Adventures style during the mid-1990s.

The title story may not be Harley Quinn’s first appearance in comics, pre-dated by a story in Batman Adventures volume two, but it lays out her background, showing how ambitious psychiatrist Harleen Quinzel became obsessed with the Joker. Although drawn by Timm in the animated cartoon style, this is quite the dark descent, dealing with what’s the equivalent of an abusive relationship, yet treading a fine line that manges to mine comedy from the situation. It could perhaps be seen as the flip side to Alan Moore and Brian Bolland’s psychological examination of what created the Joker in The Killing Joke.

For a tale dealing with such complex emotional responses it’s very minimally told, yet detail packed, and creating a character with a far greater depth than had been seen in the animated series. By turns tragic and laugh out loud funny, it remains the best work either Dini or Timm has produced for comics since, and alone it’s five star quality.

The remainder isn’t bad, in fact with one exception it’s almost all very good, but most is also just Dini and Timm having fun, whereas ‘Mad Love’ has a resonant emotional pull. The only tale approaching this is the far more dark and adult ‘Two of a Kind’, in which Harvey Dent is released from jail after reconstructive surgery removes his Two-Face identity and restores his full face. He plans to marry the surgeon, but the question becomes how much of him remains Two-Face?

Two Batman Adventures annuals form most of the remaining content. A story featuring the Demon and R’as Al Ghul is the one tale not up to par. In his afterword Timm recounts the frantic circumstances under which it was created, but the plot is padded, the art is rushed and for all the Kirby and Kurtzmanesque touches it’s nothing you’ll look at a second time. Be sure to take a close look at the spells read out, though. Fellow Batman animation artist Glen Murakami also contributed to the plot and art.

It’s a selection of shorter material that comprises the rest of the book, with numerous guest artists contributing. John Byrne adapts surprisingly well to the animated Batman style, Klaus Janson less so, and Dan DeCarlo had been drawing in that style his entire life, and Timm admits to being intimidated inking him. It’s regular Batman Adventures artist Mike Parobeck, wonderfully inked by Matt Wagner, who really shines, though, with a bizarre tale of the Ventriloquist.

There are odd omissions here. All stories from the annuals are included beyond the Dini and Timm collaborations, yet similar material from a holiday special is absent, and that’s worth seeking out either as an individual issue or as part of Batman Adventures volume 3.