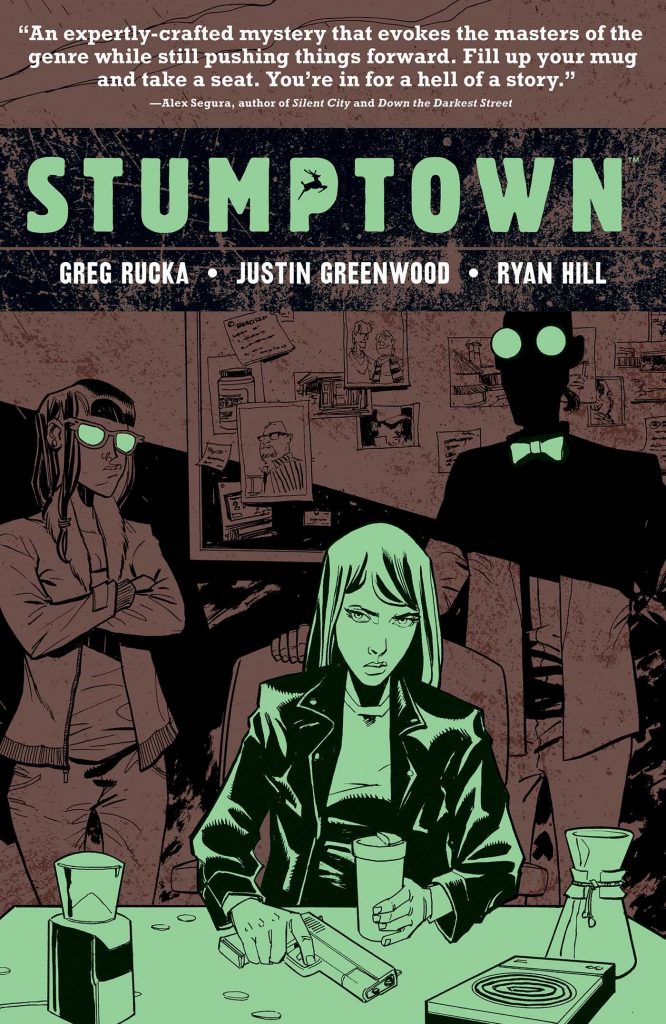 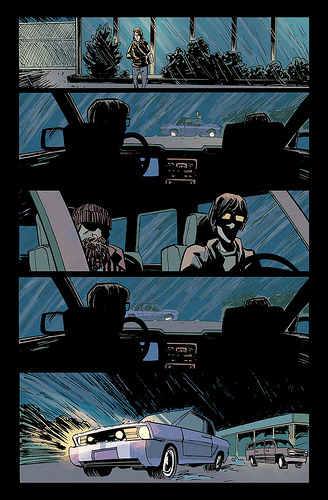 A nice aspect of Stumptown is how Greg Rucka embeds investigator Dex Parios in her location. It’s arguable to what extent a personality is cultivated by surroundings, but the stories Rucka tells overflow with local colour, and wouldn’t be as effective if transferred from Portland to Atlanta, Dallas or Poughkeepsie. The Case of a Cup of Joe focuses on North-West USA’s coffee culture, and how connoisseurs are willing to pay a premium for quality, in this case a coffee made from coffee beans excreted by a Palm Civet, as explained on the sample page. As unappetising as this may sound, for the true coffee gourmets there’s apparently no finer taste, so the price of a cup is exorbitant, and when something’s highly priced it always attracts outside interest.

It’s also unusual for fictional investigators to have any kind of family ties, but Dex’s Down’s Syndrome brother Ansel has been integral in shaping her life, and to the events of every story. This is no different, and The Case of a Cup of Joe introduces Dex’s dissolute sister Fuji. There is a slightly predictable element to how she eventually slots into the bigger plot, but before then Rucka’s done a fine job in making her resolutely annoying. So has Justin Greenwood, his loose line wonderful in having her slouch, scowl and pout.

Rucka’s noted The Rockford Files as an influence on Stumptown, and The Case of a Cup of Joe is the closest he’s come to matching the mood of that series. The background to the case is eccentric, almost all the supporting cast are annoying and unreliable to varying degrees, and Dex largely sails above continuing amateur incompetence hilariously, peeved as much at the lack of basic ability as the intrusions. It’s consistently engaging as a collection of delightful small moments.

Also present is the single chapter ‘The Case of the Night That Wouldn’t End’. That begins with the bread and butter case for investigators, the desperate person needing confirmation that their partner is cheating on them. It’s an exercise in visual storytelling as Rucka delivers the set-up on the opening page, and then barely a word beyond texts until the conclusion, using the cellphone to mark time. Greenwood’s consistently good storytelling carries more weight than usual, but although the story’s clever, it’s slight and nowhere near as engaging as the main story. Don’t be put off. That’s good enough on its own and you can look at the final story as a bonus.