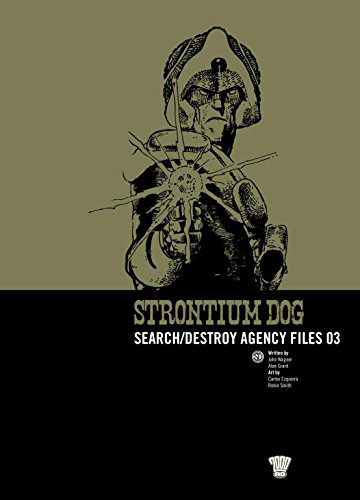 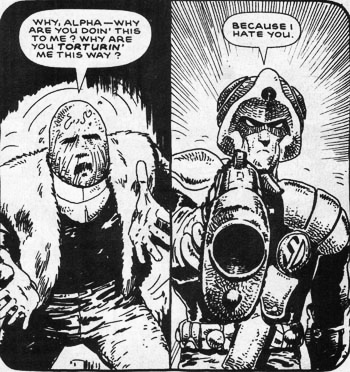 Westerns – effectively the genre that Strontium Dog occupies – rely heavily on a handful of plots. A case in point is the first story, ‘The Big Bust of ’49’, which covers the same ground as ‘The Killing’ from book two, with villains identical to others we’ve seen before. Then, just to ensure there’s not a single note of originality in the story, Johnny and Wulf end up chasing a mind-inhabiting alien parasite that presents the same challenges as the shape-shifters they’ve already faced. Mind you, it’s all very enjoyable.

In ‘The Slavers of Drule’ Alpha and Sternhammer buy land on a frontier planet, Smiley’s World. John Wagner and Alan Grant present atypically bucolic scenes of fishing and cabin building before the agents go after a bunch of slavers who’ve taken some of their neighbours in another rehash of a familiar plot.

If the previous tale hinted that Johnny and Wulf would never get to enjoy their new home, the 21-part epic, ‘Max Bubba’, hammers home that message like, well, Wulf with his Happy-Stick. After another cosy scene on Smiley’s World, Johnny and Wulf are taken prisoner by Bubba and his henchmen. We then flash back to a young Alpha time travelling to eighth-century Norway, where he meets Wulf. And now we know why the big lunk always acted like a Viking: it’s because he actually is one.  Bubba’s unravelling time so Johnny teams up with Wulf and his Viking clan to battle goblins, dragons and trolls (as well as ogres in a scene that’s lifted straight from The Hobbit).

Vikings are always good value for money and this is a great story, a bit bonkers like the best Strontium Dog. The downside? Returning to the present, Bubba kills Sternhammer and abandons Alpha, mistakenly thinking him dead. People are always getting killed in this strip – it really can be remarkably violent at times – but Wulf had been with Johnny since day one, and his death was to ripple through the strip for years.

‘Smiley’s World’ sets up the next epic, ‘Rage’, in which Johnny goes after Bubba and his gang. Always super tough, now he’s a heartless bastard that figures his being a nice guy is the reason Wulf’s dead. After the spaceship that he’s travelling on is hijacked (yep, another story we’ve had before) and all of the hijackers brutally executed by Alpha, he tracks down and kills all Bubba’s henchmen before finally taking down his main quarry. The final twist shows just how vengeful Alpha can be.

‘Incident on Mayger Minor’ is a bog standard Western. Mysterious loner turns up, moves in with lonely widow who’s having trouble with nearby evil land baron. You know the rest. The three-part ‘War Zone!’ is, literally, a shaggy dog story, with Middenface McNulty providing some welcome comic relief. Though it’s saying something when the collection’s most light-hearted tale includes the murder of 3,000 mutant men, women and children.

To end we have a couple of shorts originally published in annuals, written by Grant alone. ‘Incident at the Back o’ Beyond’ is yet another tired old staple, and Robin Smith’s art isn’t a patch on Carlos Ezquerra’s. However, the books ends strongly with ‘The Beast of Milton Keynes’, a cracking little story.

Ezquerra, who draws everything but the single Annual story mentioned above, is at his peak here, and the writers give him plenty of dramatic material to work with. This collection rehashes familiar plots, but it’s all done with no small amount of gusto and really is great fun, albeit very violent and grim. 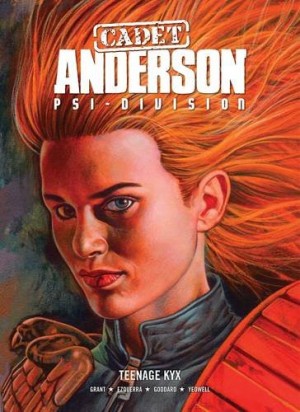