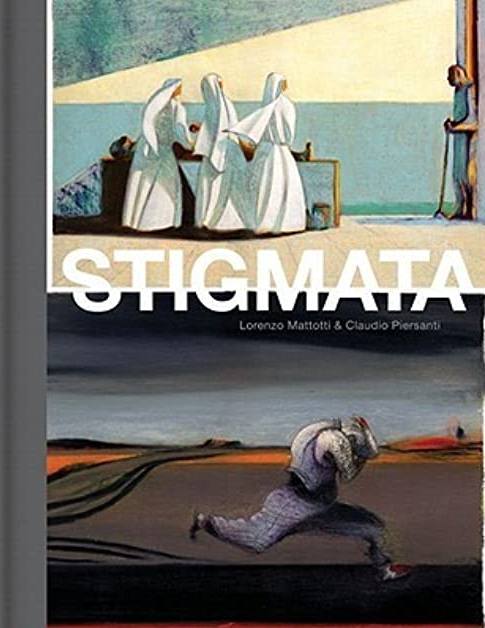 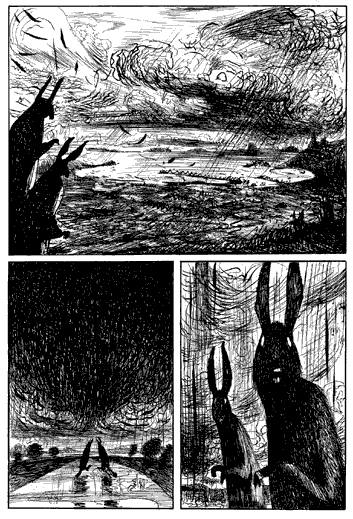 Lorenzo Mattotti is a giant of European graphic narrative with a back catalogue of truly stunning confections. In 1999 he teamed with novelist and screenwriter Claudio Piersanti for the first of two potent yarns (the other being the still untranslated Anonymes), producing a powerful and memorable examination of religious experience with Stigmata.

This impressive hardback describes the Job-like trials and tragedies of a brutal, alcoholic shipwreck of a man pushed beyond the brink of tolerance and sanity. The pariah finds a kind of peace and resolution, but unlike his Old Testament antecedent, what begins in misery with nothing, only proceeds to forfeit even his last remaining graces. By the end of his travails, the sinner has found precious little knowledge or understanding, but some sort of peace.

Drunken, brutal, dissolute, middle-aged and heading nowhere, the last thing he needed was holes in his hands that bled but wouldn’t heal. Already despised and feared, the lonely bum works at a bar, but the wounds and the blood upset even those gin-soaked sots. Moreover, people follow him, thinking he possesses some divine secret or power to heal. Eventually he snaps, wrecking the bar and confronting the vicious gangster who runs it. Some folks call him “the Saint”. He doesn’t think it’s funny.

As the city becomes even more savage and ugly, he takes off to track down an uncle who worked in a carnival. The Carnies accept him and he strikes up a romance with the vivacious Lorena. Even working as a handyman, his bleeding hands interfere, but the canny show-people turn it to their advantage, setting him up in a booth dispensing piety and miracle from his shabby, tawdry “House of Blessings.”

Brooding, compelling and rendered in a cacophony of swirling miasmic lines, this fearsome modern parable is a fierce interrogation of faith and destiny asking uncompromising and uncomfortable questions about the price of Grace and the value of belief. Are these trials, so like Job’s cruel yet purposeful tests, the tough love of a benevolent father, the whims of a despicable devil or the random vagaries of an uncaring fate?

Stigmata is a grotesque and beautiful metaphysical rollercoaster, with existential angst and blind faith gripping each other’s philosophical throats and squeezing really, really hard. No rational reader or mature comics fan can afford to miss this dark shining delight.