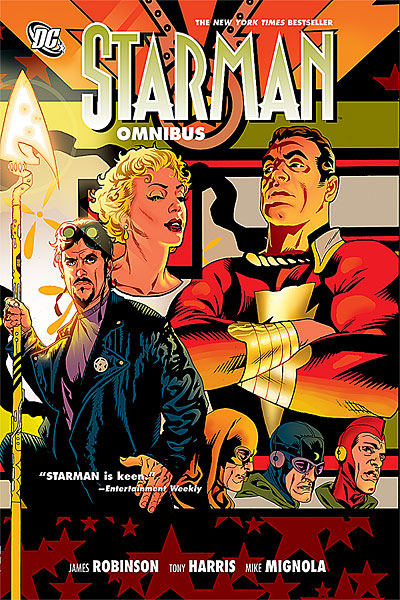 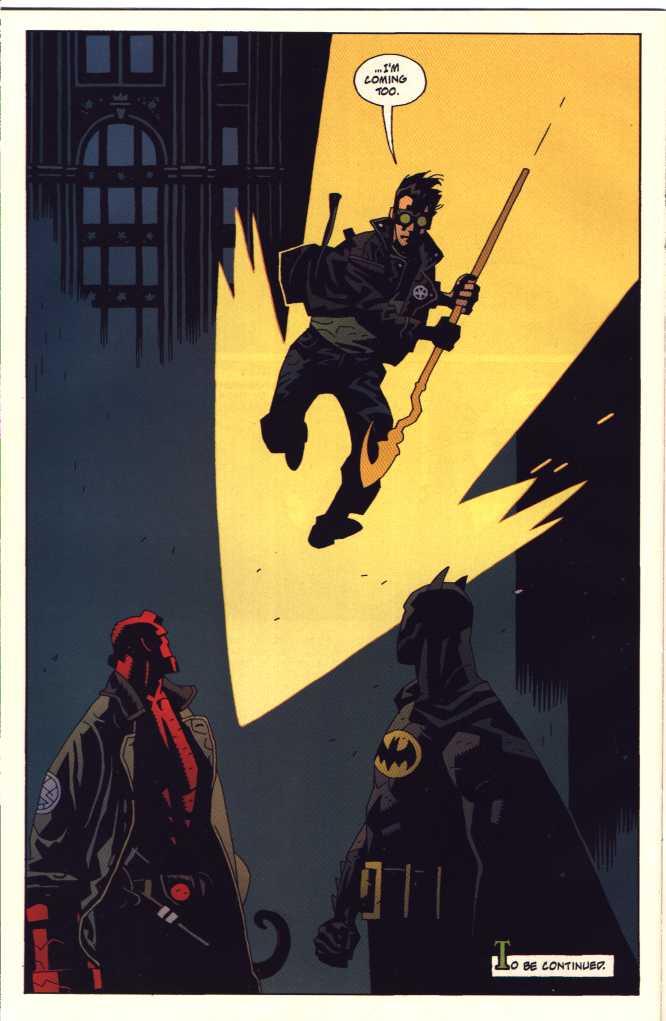 Sadly only available in hardback, roughly a third of this Omnibus edition is material not presented in the otherwise comparable paperback collection To Reach the Stars. That content has it’s own review, the short of which is that the meeting with Captain Marvel doesn’t really work, it’s a patchy collection overall (by the high Starman standards), and artist Tony Harris’ farewell.

The most alluring of the additions is the closing two chapter teaming of Batman, Hellboy and Starman, written by Starman’s creator James Robinson, illustrated by Hellboy’s creator Mike Mignola and uncollected elsewhere. Batman is first teamed with Hellboy, then Starman and Hellboy unite, with a brief crossover, as a group of neo-Nazis with magical skills kidnap Jack Knight’s father for purposes unknown. It’s superbly drawn in Mignola’s familiar jagged and spartan style with colourist Matt Hollingsworth adding atmosphere, but it lacks the depth of character and foreshadowing that Robinson brings to regular Starman material. This being the case, it’s competent action/adventure all the way, but without the better aspects of his writing to balance them, Robinson’s occasional twee inclinations (an aside about whether light in the darkness is meant literally or figuratively, for one) irritate more than usual.

Almost all the remaining material exclusive to this Omnibus is a Jack Knight free zone, the exception being a sequence that sees Jack pitted against a new version of his father’s old enemy Rag Doll. It’s a mystery framing stories of assorted Opal City supporting characters, with art from John Lucas just about passing muster. The remaining art is generally fine, with the most surprising being Mike Mayhew’s Scalphunter drawn before his move into computer enhanced realism. Here we see the Starman of 1951 properly for the first time, taking on Bobo Benetti, but the most interesting is Dusty Abell drawing a story of the O’Dare family when the current generation were largely small kids.

The new Mist, Nash, created in Night and Day, has a solo outing in which she’s blackmailed by old DC villain the Black Hand. The story was created as DC set aside a month to spotlight their female characters, but despite throwing in Mary Marvel, it’s not a project that appears to have enthused anyone involved. The art by the team of John Lucas and Richard Case holds little appeal.

Originally published a page at a time in several comics, the Shade’s prose journal reads better without a month between episodes, and the two other stories not in To Reach the Stars, fall into the Times Past category. These feature Starman-related characters in days gone by, and the Gene Ha illustrated story set in 1952 (despite the cover reproduction claiming it to be 1954) is the finest in this collection. It extrapolates on a passing comment made by Ted Knight in the previous book, has good roles for Benetti and the Shade, and Robinson’s able to revive another obscure hero, the Jester.

Mayhew illustrates a story of the Phantom Lady in 1943, the cover reproduction again providing a date differing from the story. She’s revealed as related to Ted Knight, and Robinson presents a sardonic, confident and intelligent woman who knows exactly what she’s doing. It doesn’t match the 1952 tale, but is an endearing characterisation.

This is a better purchase than To Reach the Stars, and not just for completists.