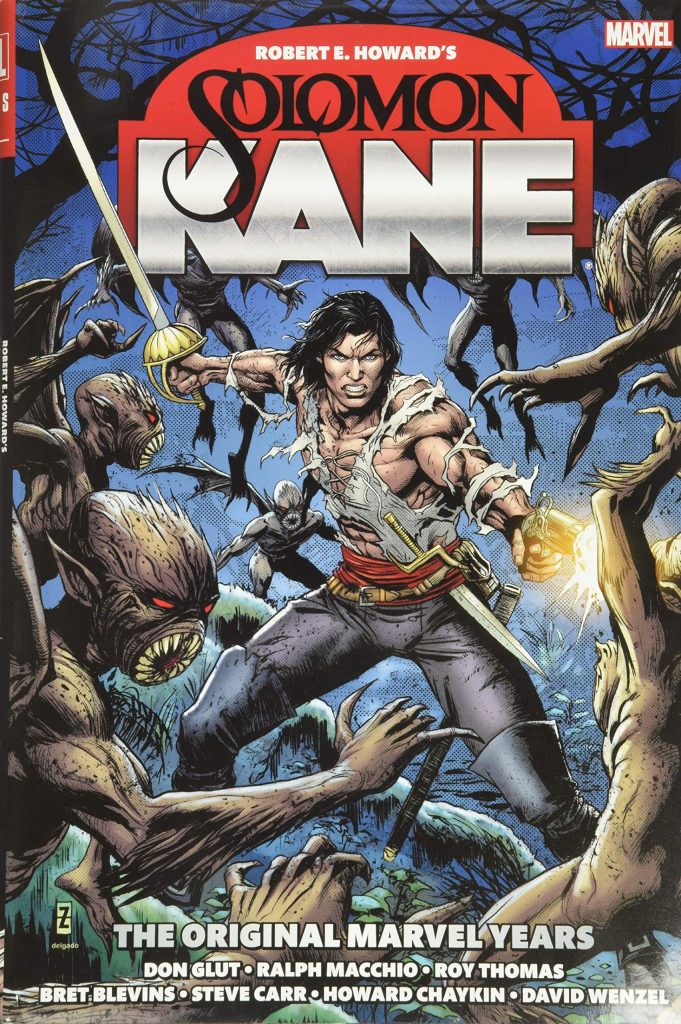 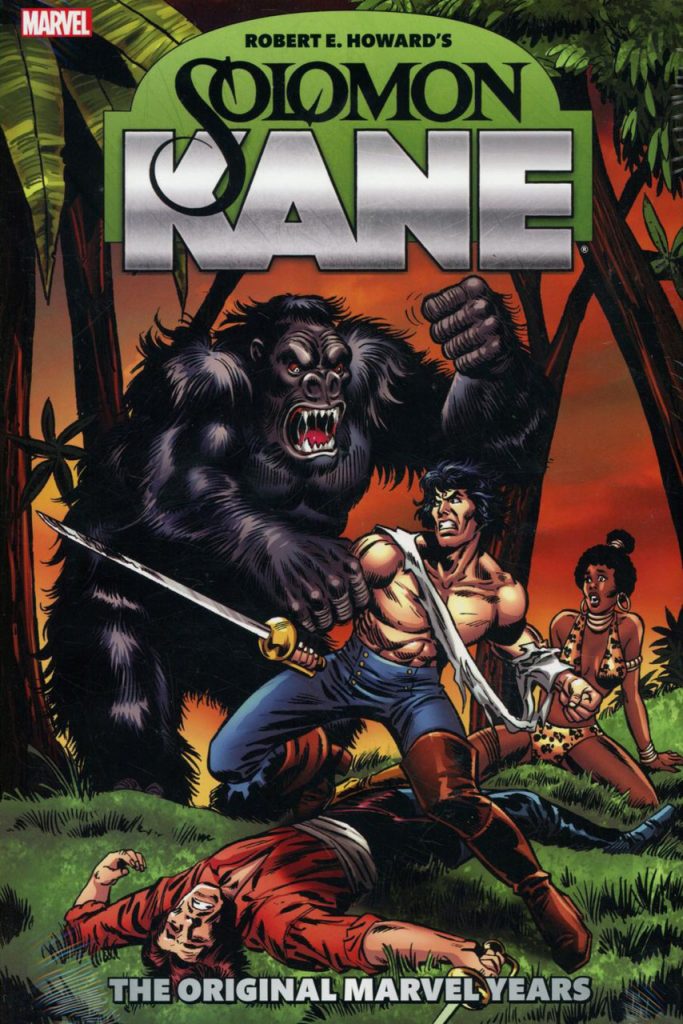 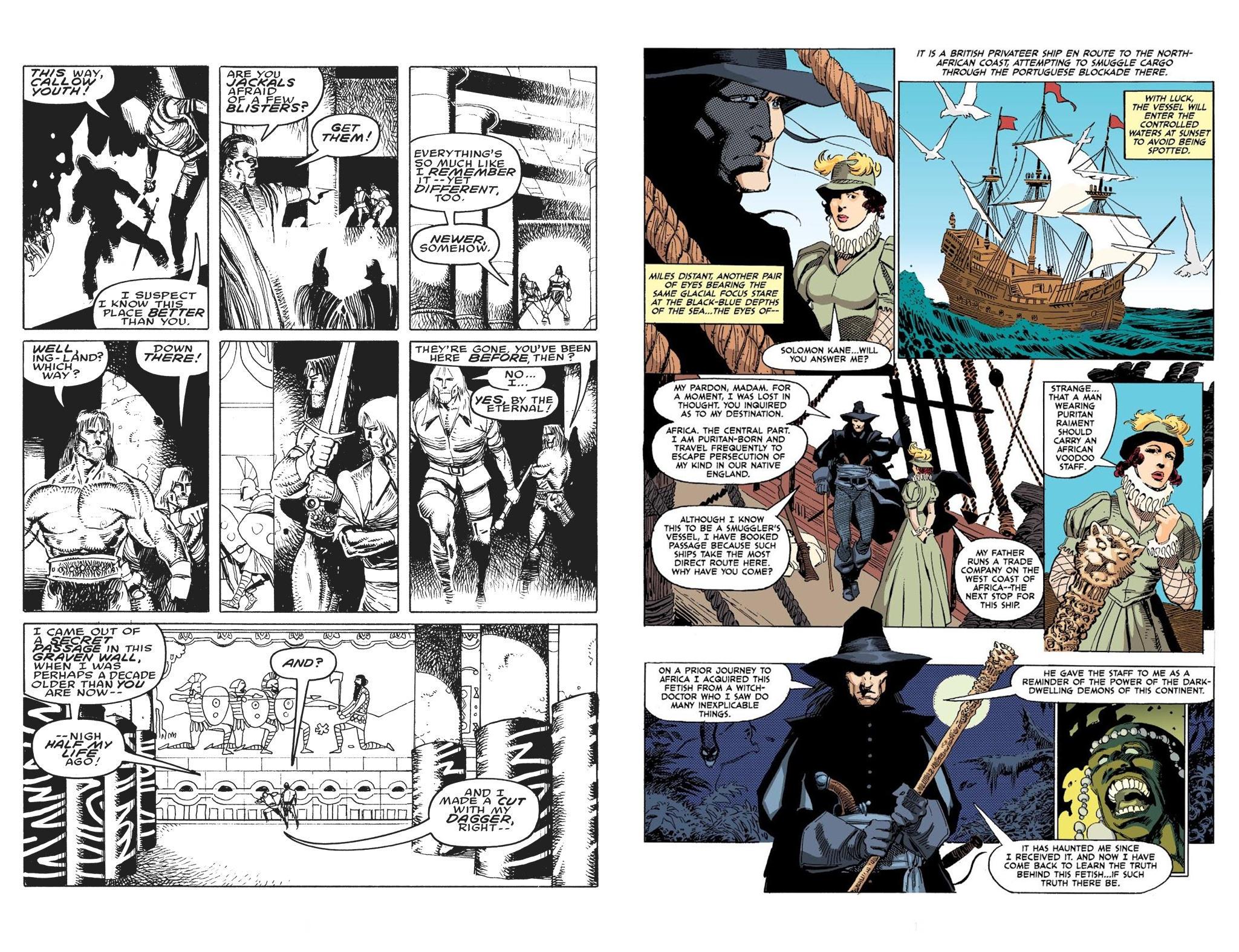 Robert E. Howard created 17th century Puritan traveller Solomon Kane several years before Conan the Barbarian, but discovered readers preferred Conan’s wild escapades to a man shackled by his religious beliefs. Furthermore, there was no need to tether Conan however slightly to historical reality, and Kane became a footnote.

Deacades later, comics starring the revived Conan were a phenomenon, and back-up material was needed to fill Marvel’s black and white magazines, so editor Roy Thomas rummaged in Howard’s back catalogue and revived Solomon Kane. All his 1970s and 1980s comics are presented here, some in colour, but most in black and white. It’s a frankly patchy collection, although featuring adaptations of all Howard’s own Solomon Kane stories, some more than once, and surprisingly, poems. In terms of writing Thomas is the gold standard. He breaks down the stories well, rarely overwrites, supplies credible dialogue and even when not adapting has a feel for Kane’s personality and beliefs. An encounter with Dracula in the 1600s is enjoyable, as is a later team-up with Conan drawn by Colin MacNeil (sample art left).

MacNeil is one of several artists readers may be surprised worked on Solomon Kane. The quality of later fantasy artist David Wenzel’s pages are very dependent on the inker, with Wenzel best inking himself, and standout strips are provided by Alan Weiss, Steve Carr and Virgilio Redondo. Mike Mignola is also good (sample art right), but working in a very different style from his more familiar blocky, stripped back figures, inking from Al Williamson adding to the unfamiliarity. The standout colour art is the stunning Sandy Plunkett’s grace and delicacy providing two pages of illustrations for one of Howard’s poems.

Too many other writers just use Kane as a standard foe of supernatural threats, the beliefs that make him interesting reduced to comments about someone or thing being ungodly or hellish. Don Glut and Ralph Macchio write more than anyone other than Thomas, and neither shines whether supplying original material or adaptations, with Glut’s earliest contributions appallingly over-written. It’s a habit he never entirely shakes, the resulting unnecessary captions and dialogue obscuring much art. Macchio on the colour stories is better, yet for the most part supplies serviceable stories, but not more.

This is a collection more likely to appeal to those already fans of Howard’s work, who’ll enjoy seeing it transferred to comics, although they may quibble about additions made. New readers will find an interesting warrior whose interesting characteristics are never fully exploited.

Dark Horse previously published all these stories in book form, separating the content into colour stories (The Chronicles of Solomon Kane) and a black and white volume at over double the size (The Saga of Solomon Kane).