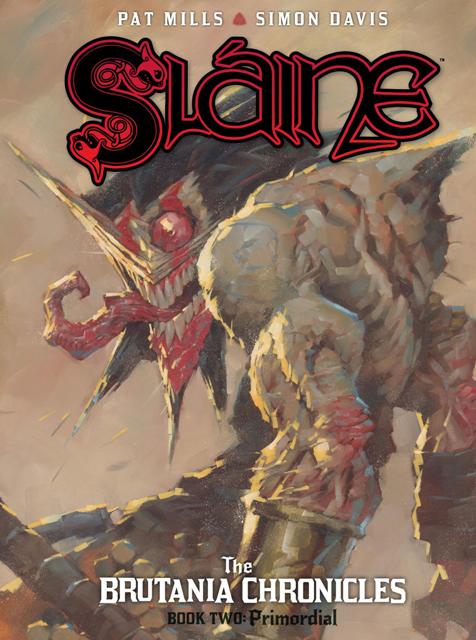 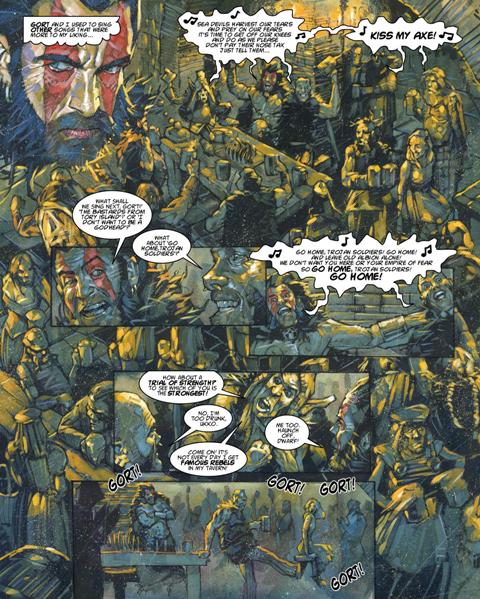 The Brutania Chronicles Book Two: Primordial opens on Sláine facing off against Slough Gododin, chief of the Drune Lords and son of his old nemesis Slough Feg. As seen in A Simple Killing, he’s cut off from his earth warping powers by Gododin’s twisted magic in order to power the Primordial, so Sláine’s immediate future looks pretty grim. His enemy is playing psychological games, his questionable parentage is haunting him and his ally is under Gododin’s spell. But this is Sláine Mac Roth and he is imminently severe in the work of violence.

It isn’t uncommon for Book Two in any saga to disappoint, particularly when an author is taking the opportunity to introduce devices essential to the main tale. Primordial is unfortunately such a book for a number of reasons. Simon Davis’ art is very good, the movement rich and the colours vivid. He does focus too much on his artistic vision on how the pages should look rather than trying to engage the reader. Each page is full of sumptuous detail, but because Davis has eschewed traditional panel layout, it isn’t easy to follow the story. His artwork is still very impressive, amazing even, but it defeats the purpose if you can’t keep readers riveted or clearly facilitate the story’s progression.

The most problematic issue is that in attempting to set the scene for subsequent books, creator Pat Mills bogs the story down with lengthy monologues describing belief systems, histories and ancient grievances between various parties. It’s not the first time he has done this, a similar thing happening in Time Killer many years ago just as Sláine was taking off. When Mills gets going on the evils of organised religion, his stories lose their focus and his good ideas are derailed. Fortunately he manages to keep himself on target, though raises other questions.

Is this a new world for Sláine altogether, starting fresh as Mills claims, or is he improving and building on the world he has already crafted over thirty years? Is this a political and social commentary on 21st Century Britain and its resurgent interest in Empire? You get a sense on both counts that answer might be yes, yet it’s hard to tell for sure and the story itself isn’t very interesting at this point.

What does redeem Primordial is how Mills investigates Sláine’s tragic relationship with his parents. Flashbacks to important moments in his childhood interactions with them and in other points throughout the series are well depicted by Davis, surprisingly clear and easy to follow. How Slough Gododin uses these memories against Sláine intrigues, the confident and unshakeable warrior’s new vulnerability and internal struggle adding a new perspective.

As is often the case, you have to read Book Two: Primordial before moving forward. Fortunately, things pick up in The Brutania Chronicles Book Three: Psychopomp.