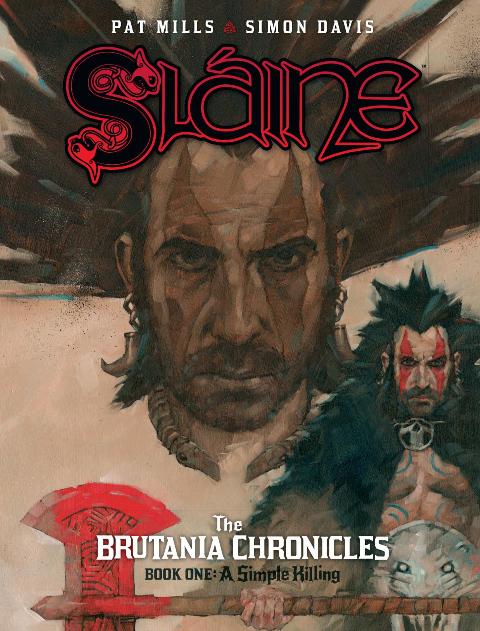 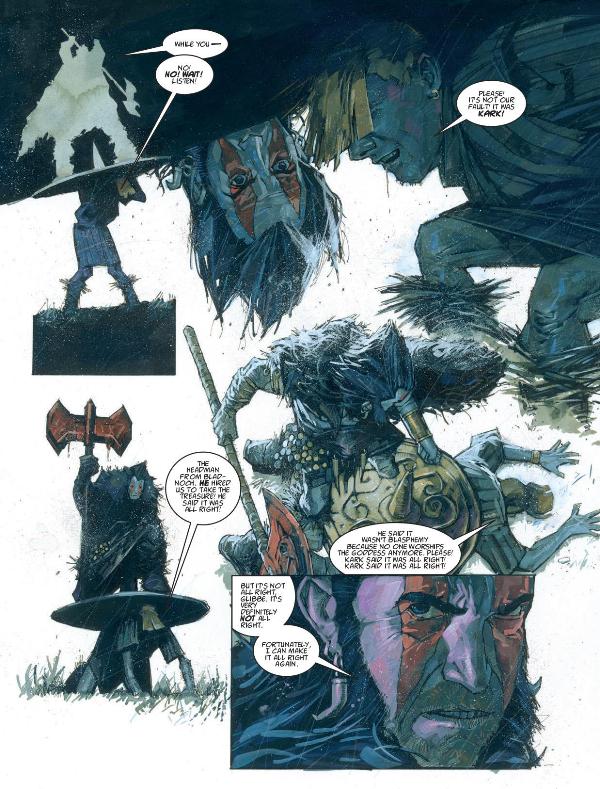 Up until the 17th century it was widely thought that pre-history Britain was settled by refugees from ancient Troy. Aeneas of Troy arrived first, his grandson Brutus later establishing a kingdom dubbed Brutania around his capital New Troy, the site of Modern London. As Britain’s empire grew, the theory waned in popularity. After all, if you are going to conquer the world it’s better to model yourself on winners like the Romans rather than a losing side. Whether ancient Trojans settled pre-historic Britain is true or not, the theory provides a largely untapped source for stories few writers have mined.

It’s from this vein that Pat Mills approaches a reboot of his now iconic character Sláine, the Celtic Warrior. In his introduction Mills calls it a fresh look, however anytime a Sláine reboot has been attempted the results have been variablly received by notoriously fickle fans. We will concede that the 1990s produced an eclectic mix of stories and an editorial attempt in 2001 to make Sláine cooler for the new Millennia was ill advised. However, there are gems to be found from that time and the recent Books of Invasions saga is fantastic. How does this fare?

The Brutania Chronicles Book One: A Simple Killing features a grizzled, older and care-worn Sláine wandering the land of Albion on his own. With Sláine’s people, the Tribes of Danu, now gone into the Earth (another dimension), Danu’s temples are vulnerable to raiders and the surviving Fomorians have reinstituted their dreaded nose tax. Not as committed to battle as he once was, Sláine is torn between attending the Beltane celebrations and going to the Fomorian Isle of Monadh when he meets Sinead. An escapee from Monadh she plans to raise a resistance but the Drune Lords who still reside on Albion have not forgotten her potential and want her back.

Artistically Simon Davies is a very good match for illustrating Sláine. Inspired to draw by early series illustrators Mike McMahon, Glenn Fabry, Simon Bisley and the Italian Fantasy maestro Sergio Toppi, you can see their influences in Davis’ array of wonderful fantasy creatures. His style is iconoclastic in approach, larger art providing a focus with smaller panels scattered around or intersecting it. He uses abstracts to tell the story if needed, but can equally maintain a level of realism, his art layered with lush colours and settings over both single and double page spreads.

For a fresh start there’s a lot of familiarity to Book One. The Drune Lords are corrupted druids who were a key part of Sláine’s earliest tales, but largely absent since The Horned God, here returned to full-time villainy. What is new and very interesting is that this isn’t the confident carefree battle ready Sláine of old, but a man deeply grieving the loss of his wife and his people. He fights when he has to rather than for the sake of it. This is a mature Sláine, more inclined to show mercy if it is deserved.

A Simple Killing is well illustrated but lacks a congruent plot. Mills has always had a particular vision for Sláine, to keep it firmly rooted in the Celtic traditions, and this remains. His approach to Sláine himself raises an interesting question. Artists have always used themselves as the burly Celt’s model, but are we seeing more of Mills in his creation this time? It’s an intriguing thought and Sláine’s vulnerability strengthens the story. Will it continue to do so?