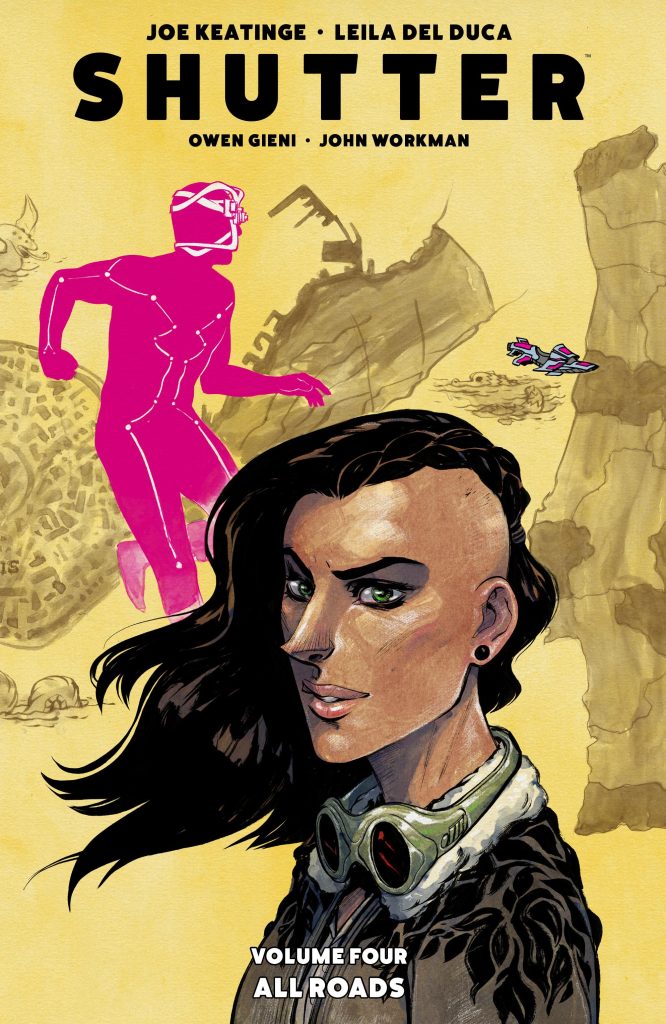 Kate Kristopher was somewhat disenchanted and idling her life away, but over the course of three previous books she’s learned who she really is, in Quo Vadis united with most of her brothers and sisters, and they’ve come to a decision that the world as it is needs radical change. That will involve overthrowing a near immortal secret society that have broadly controlled human events since the dawn of time.

It’s strange to consider that in the opening Wanderlost there were doubts as to Leila del Duca’s art, as she’s immense on All Roads, switching styles from her own very appealing, character rich looseness to Tintin style ligne claire, assorted pop art inserts and traditional animation cartooning among others. Additionally she’s not just working with the single genre. Action scenes that could be from ninja comics mix with illustrations of creatures more at home in children’s fiction, and a talent for showing the cast sitting around bantering is essential. Colourist Owen Gieni also comes into his own. A remarkable second chapter told almost entirely with three differently coloured tiers per page is presumably on instructions, but it draws attention to how subtle he is elsewhere.

Anyone already caught up in Shutter will require no persuasion to pick up All Roads, and they should be immensely satisfied, but Shutter isn’t a series to start halfway. Joe Keatinge is telling a thirty chapter novel and there are no concessions for newcomers, who’ll have no idea what’s going on and who the nearly two dozen main characters are. The mood varies considerably, throughout, and there’s a shocker of an ending. Shutter concludes with So Far Beyond.