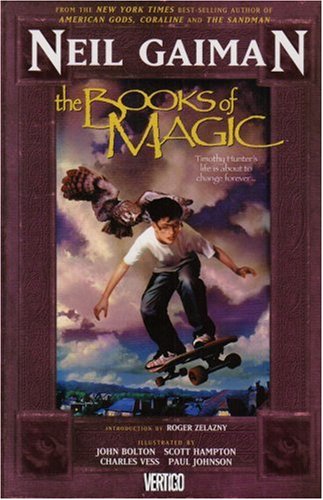 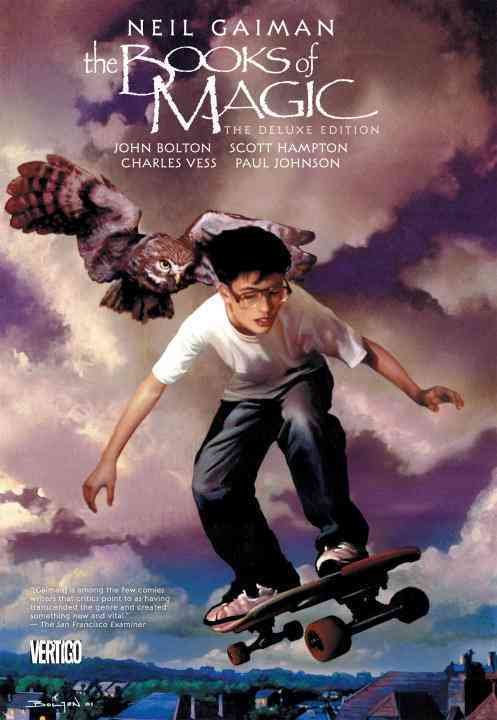 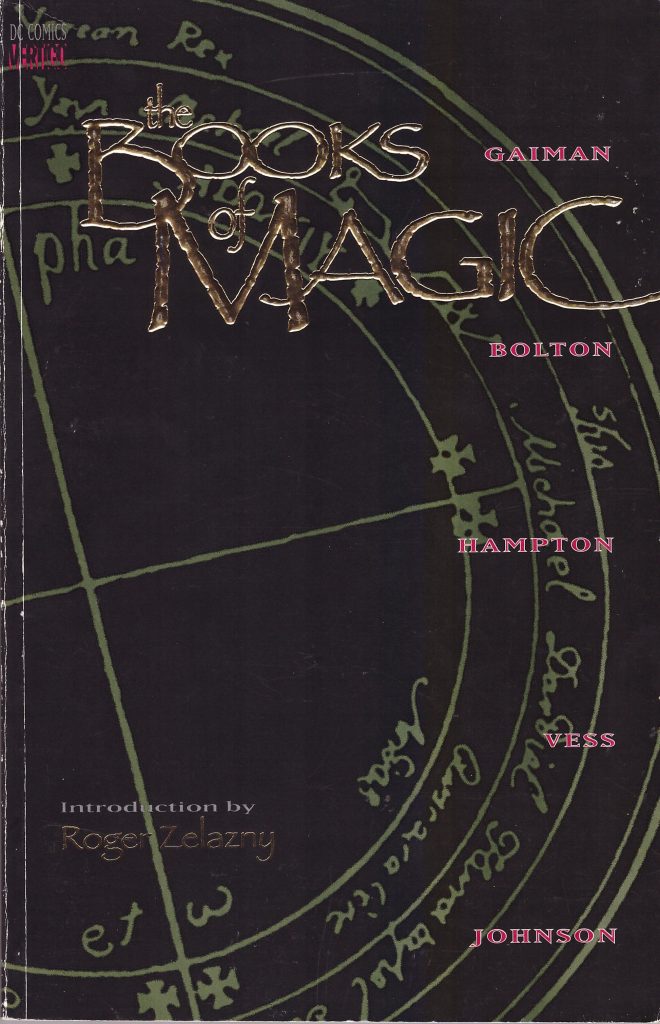 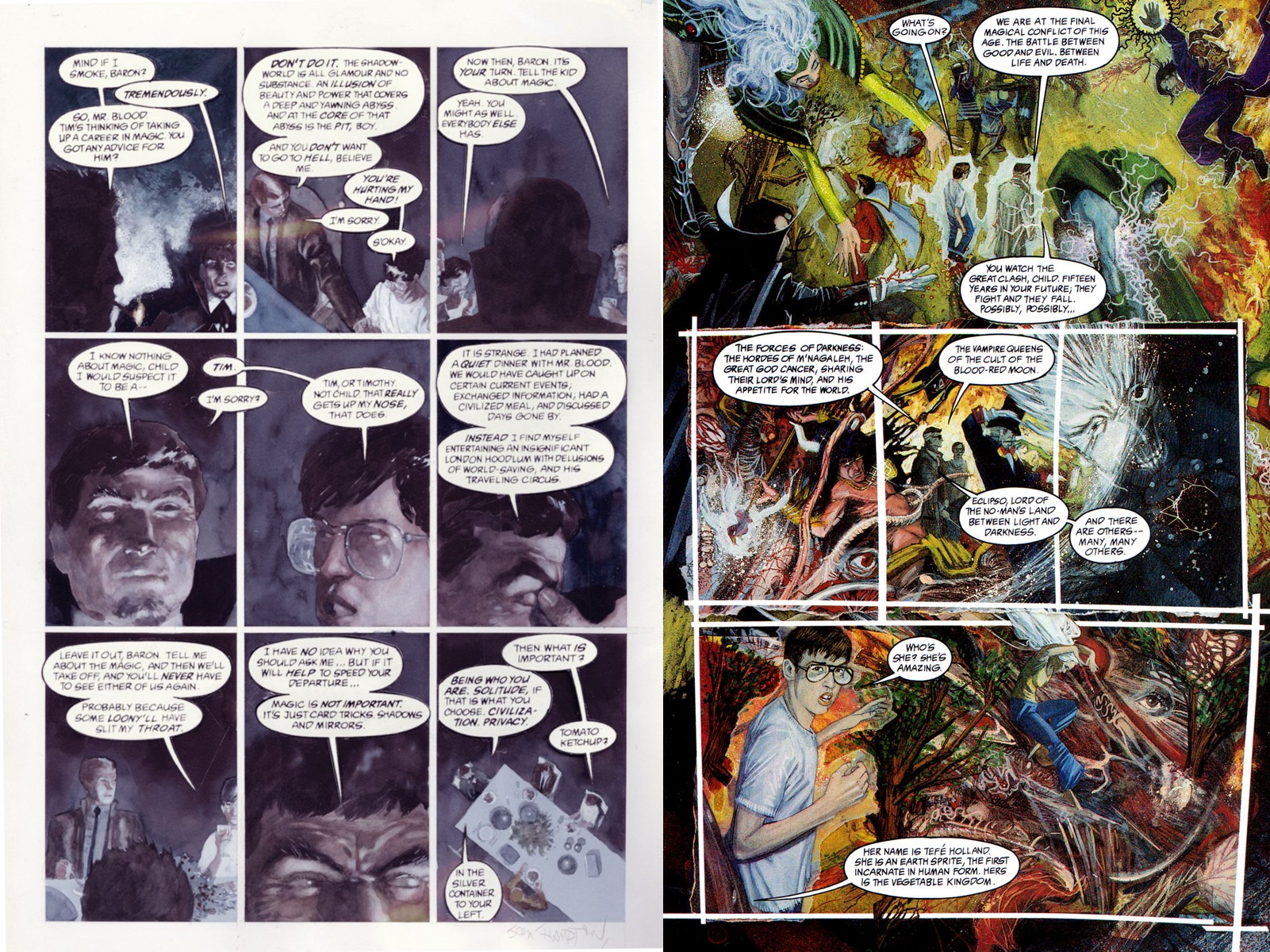 John Constantine, Mr. E, Doctor Occult and the Phantom Stranger are near enough top of the range when it comes to mysticism, and they’ve identified twelve year old Timothy Hunter as future major magical force. The question is not whether he’ll become powerful, but the purpose to which he’ll put that power. One solution may be to kill him before he develops, so solving any possible future problem, but the combined mystics choose instead to show him events in the hopes of guiding him toward the correct path. So, we have one writer, Neil Gaiman, four chapters, four artists, and four tour guides. It’s a neat package.

We’re assured that there’s a power in names, so let’s drop a few: John Bolton, Scott Hampton, Paul Johnson and Charles Vess. They’re a potent combination, each of them a superb artist. Johnson (sample art right) is the least known today, having left comics for other pursuits. He’s the most experimental, spattering his pages with ink, breaking them down into jagged panels, or pasting outlined figures onto backgrounds. It’s very impressive, as are the montages, a technique also used by Bolton, here a painter at the top of his game. Hampton’s present day (sample art left) is more traditional, subservient to the story, but the most expressive contribution. It’s Vess who has the greatest opportunities for pastoral beauty, the only artist working in pen and ink, and the land of Faerie is one he’s frequently visited, producing a memorable combination.

The Books of Magic is the type of story Gaiman delivers neatly, a densely discursive meander through so much, informing or speculating all the time, building character in increments. In places there’s no time to construct, so he supplies archetypes that connect instantly, the spurned lover, or the pompous Dr Fate. In passing a fair amount of DC characters or concepts manifest, but often introduced with such little fanfare that anyone who doesn’t know would consider Nightmaster as much a legend as Thomas the Rhymer, so don’t be dissuaded by them. Tim himself is extraordinarily calm and accepting, always ready with a frivolous comment in the protective way of teenage boys, but otherwise a mirror to what he’s shown. This is the past, the present, Faerie and a sequence of possible futures.

A comment repeated about magic is that people bring what they want to it, and it’s also noted that sometimes there are no metaphors, it’s just the way things are. However, because The Books of Magic is by Gaiman you’ll find plenty of twaddle online unpicking the minutae to interpret it for you. As a rule of thumb, if they don’t mention the artists by name, don’t be tempted. Gaiman researched the recycled ancient myths and legends, and this is a lot more fun taken at face value as an eye-opening tour than it will be if probed for comment and meaning. Gaiman excels, the artists excel and do you really need to know any more?

Tim Hunter would prove to be a surprisingly enduring creation, spinning off first into a series of Books of Magic stories not written by Gaiman, and subsequently into other incarnations. A similarity with another bespectacled teenage wizard has been noted, but Gaiman dismisses any suggestions of plagiarism on the part of J. K. Rowling. What’s referred to as a ‘Deluxe’ edition, by the way, would be called the hardback version by anyone outside a marketing department.