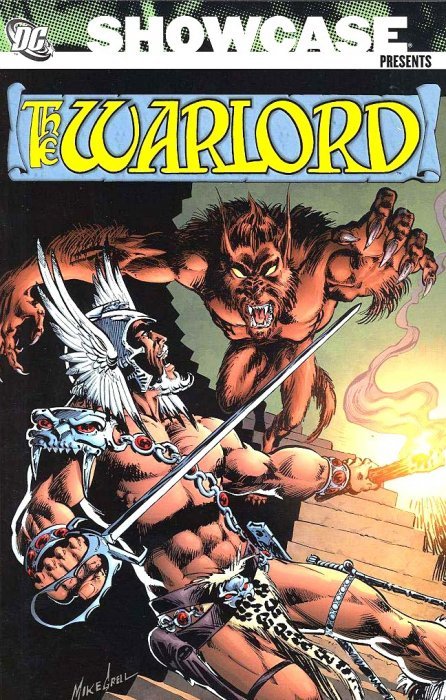 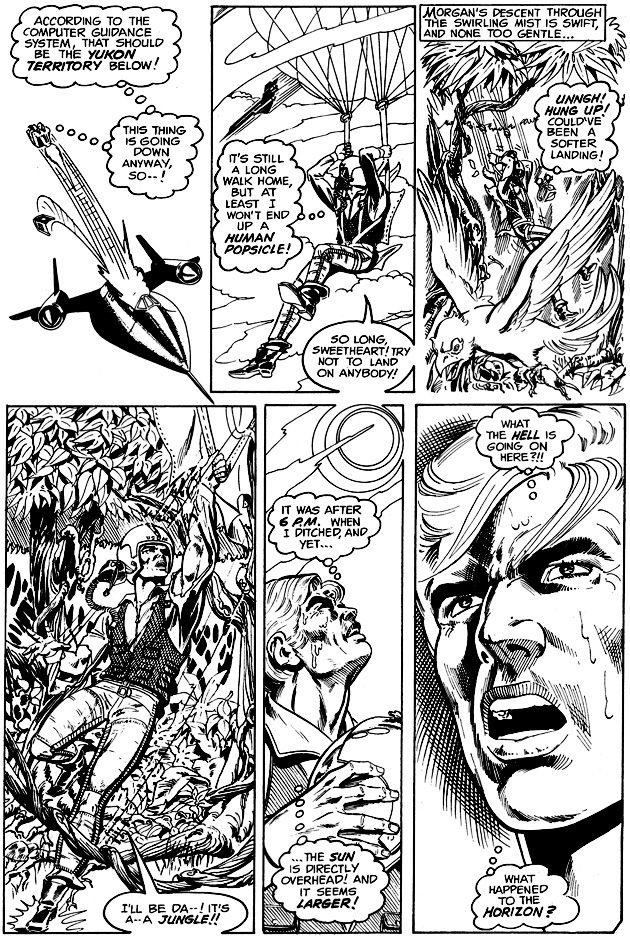 The Warlord is artist Mike Grell’s pastiche, homage and tribute to the works of Edgar Rice Burroughs (particularly Pellucidar – At the Earth’s Core) which, after a rather shaky start, became DC’s most popular comic for a time.

Blending swords, sorcery and super-science with spectacular, visceral derring-do, the lost land of Skartaris is a venue expertly designed for adventure: stuffed with warriors, mythical creatures, dinosaurs and scantily-clad hotties. How could it possibly fail? This stupendous monochrome compendium, gathers Warlord’s adventures from late 1975 to December 1979, delivering wild wonder and breathtaking thrills from the outset.

Warlord is U2 spy-pilot Colonel Travis Morgan, shot down in 1969 whilst filming a secret Soviet base. The embattled aviator manages to fly his plane over the North Pole before ditching, expecting to land on frozen Tundra or pack-ice on the right side of the Iron Curtain. Instead he finds himself inside the Earth, marooned in a vast, tropical jungle where the sun never sets. The incredible land is populated by creatures from every era of history and many that never made it into the science books. There are also cavemen, savages, lost races, mythical beasts, barbaric kingdoms and fabulous warrior-women.

Plunging head-on into the madness, the baffled airman saves an embattled princess from a hungry saurian before both are captured by soldiers. Taken to the city of Thera, Morgan is taught the language by his fellow captive Tara and makes an implacable enemy of the court wizard Deimos. After surviving an assassination  attempt the pair escape into the eternal noon of the land beneath the Earth.

Perhaps predictably, the lost airman and the Princess of Shamballah fall deeply in love, only to be separated by slavers who leave Morgan to die. They’re reunited, but it’s eight years before the displaced aviator returns to the surface-world. He emerges from a lost outpost in the Andes where a multi-national excavation is being conducted in the ruins of Machu Pichu. The CIA assume he defected to the Soviet Union, necessitating a rapid return to Skataris.

Consistently imaginative sword and sorcery is the order of the day, but the tricky concept of relativistic time and how it does or doesn’t seem to function in this Savage Paradise increasingly grated with many readers. However, as Grell’s stated goal was to produce a perfect environment for yarn-spinning, not a science project, the picky pedant would be best advised to suck it up or stay away.

Simple, thrill-seeking fantasy lovers will find pure escapism, action and adventure, light on plot and angst but aggressively and enthusiastically jam-packed with action and wonder. These are timeless tales that will enthral, beguile and enchant. As the man himself constantly says “in Skartaris, always expect the unexpected”.

For a title so popular in its day and so long-running, The Warlord is strangely ill-served by graphic novels. There’s only this and the long out of print, and now jaw-droppingly pricy, colour compilation The Savage Empire. 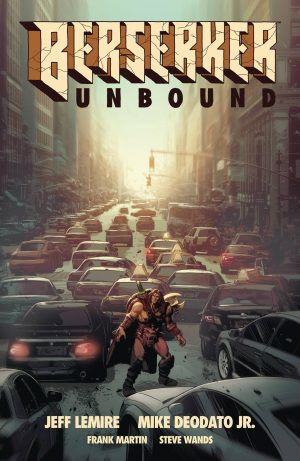 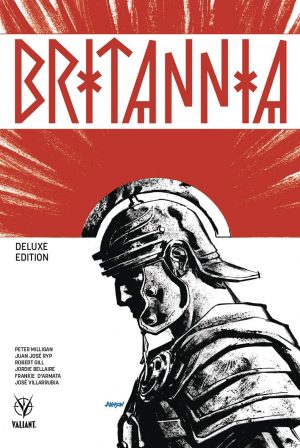