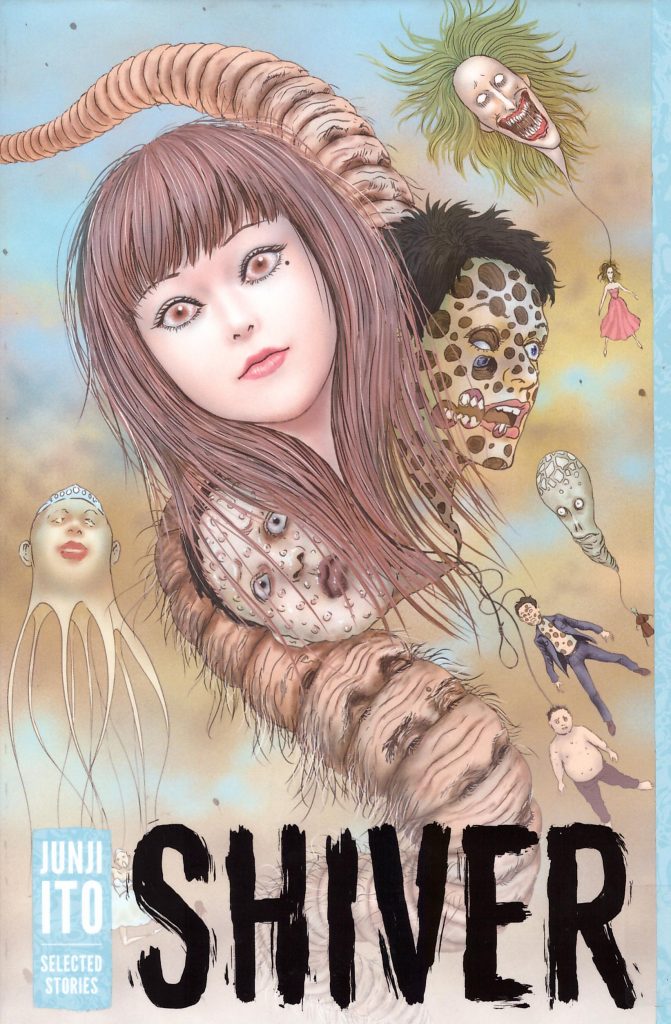 For intelligent, unpredictable and offbeat horror there are few people working in comics able to turn out a story like Junji Ito. His art has an attractive precision frequently seen in manga, although he’s the top end of the quality scale, but what really sells Ito’s work is his utterly individual mind, and the best way to convey that is to run through one of the nine stories here.

‘Hanging Blimp’ is demented, yet completely convincing. Its sixty pages begin with Kazuko crouching fearfully behind her desk. There’s a knocking at the window, and a voice that’s her own telling her she’ll die soon if she doesn’t leave her apartment to have something to eat. Her mind flashes back to how the nightmare began, with the apparent suicide of her best friend Terumi, found hanging from a power cable, her neck almost severed by the deed. Several days later people begin seeing a giant inflated version of her head floating above city like a balloon, complete with string dangling down, but tied into a noose. Ito’s accompanying illustration of what could be a laughable vision is suitably terrifying, with its closed eyes and severed neck. Kazuko then arrives just too late to prevent the suicide of Terumi’s boyfriend, but watches as his head inflates and detaches from his hanging corpse to join Terumi’s head in the sky. The following day more giant floating heads begin appearing, now of people still living, and begin targeting those people with the noose dangling down. That takes us to roughly two-thirds of the way through, Ito gradually increasing the tension and making us aware something is horribly wrong, and he finishes the story in apocalyptic style.

The collection is also notable for an appearance of Tomie, the character most associated with Ito. She appears as a beautiful young woman, but the festering evil within her can be seen when people are attuned. Otherwise she’s manipulative, and able to make people fall in love with her unconditionally, and this obsession usually results in tragedy. In this story it’s a painter who falls victim.

Too many horror stories rely on retreading already familiar scenarios. Ito avoids the slasher and the vampire to disturb on a more primal level, where a recognisable real world is disturbed by something unimaginable. Over short stories, this requires an incredibly creative mind, yet Ito surprises again and again with his imagination. A story about a family’s ancestors and their influence results in a stomach turning concept, yet Ito then almost induces spontaneous vomiting when he examines cooking oil addiction with a gloriously gross visual metaphor. Even an idea as simple as dreaming one is dead results in a viscerally disturbing tale.

Ito himself selected the nine stories translated for this collection, and offers brief notes after each, along with his original concepts and sketches. The cover displays the creations found in each of his stories, each horrific and memorable, and each worked credibly into real world circumstances. As a selection of genuinely disturbing horror stories, this is unlikely to be bettered.