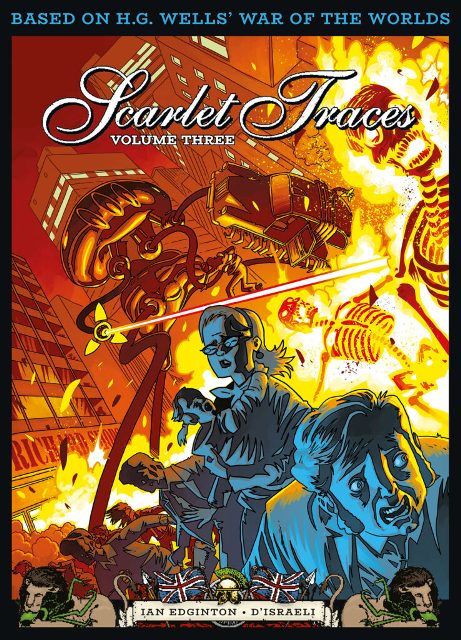 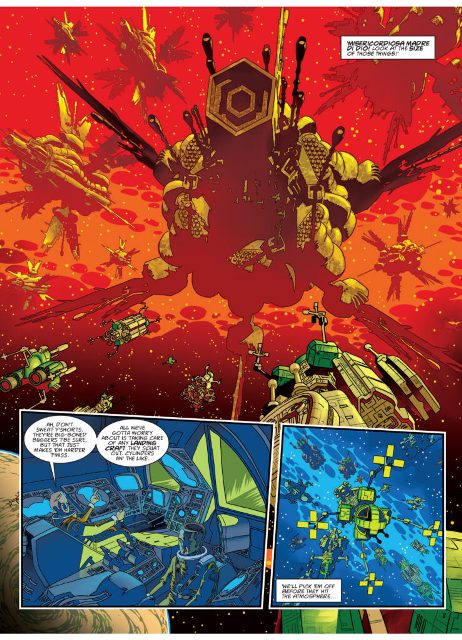 Some books are so influential they spawn numerous adaptations, good and terrible. The War of the Worlds by H.G. Wells has enjoyed more good adaptations than most since its first serialisation in Pearson’s Magazine in 1897. Most of these focus on either the grand spectacle of the Martian invasion or – in recent years – aim for a realistic period piece. Few if any maintain the spirit of Wells’ anti-war message along with a thrilling story like the Scarlet Traces series written by Ian Edginton and illustrated by D’Israeli (Matt Brooker).

Following immediately on from Scarlet Traces Volume Two, it’s the 1960s and the Martian threat hurtles towards earth on a mission of conquest and revenge. As Earth’s defenses struggle to withstand the invasion, the British government turns to Ms. Charlotte Hemming, the only person to witness the events during the last conflict on Mars in 1945. She has seen firsthand what is headed their way but despite her resourcefulness can only helplessly watch.

Help comes from unexpected quarters as in space a discovery is made that could change the tides of war, while on Earth, the Venusian refugees who previously suffered under Martian oppression are mounting a resistance. The horrors of the Martian conquest of Venus are still fresh in their memories and while they aren’t always made welcome on Earth, they’ll be damned if they’re giving up their new home.

As a series, Scarlet Traces succeeds because of a dedication to constantly improving the art and telling a bold storyline. Edginton keeps Wells’ original concepts as a basis while expanding on how the original Martian invasion would affect society over the course of a century. If you had access to superior technology and knew you weren’t alone in the galaxy, how would the secrets unlocked influence future technology, society, and history? It’s a thread connecting all three books, Edginton fusing different genres (thriller, war, and adventure) with honest observations of human nature, and searing social commentary.

Edington has throughout embraced a more cynical outlook on human nature than H.G. Wells had. He still breeds that sense of bleak hopelessness to drive the thriller elements, yet his honesty in exploring the reality of compromises needed to make peace work, things that often prevent peace from transpiring, is oddly refreshing. However, he fosters something else he didn’t previously: hope. That a son will come home from war, that help will arrive before the end, and that one day there will be peace again. It’s so relevant to human existence and improves the story tremendously.

D’Israeli is very skilled at capturing the horrors of war, capturing the panic and despair. There are definite improvements to how little details are rendered, though he shines in displaying emotions like the fear of subjugation and expressing glimmers of hope. He works well with Edginton and they craft emotionally powerful scenes and interesting alien cultures while adding a fresh perspective on concepts like home and family. There’s a distinct 1960s flavour and D’Israeli renders incredible detail into the clothes, space ships, and the carnage of invasion. This attention to detail can make it hard to follow, but also captures the reality of large-scale conflicts.

Scarlet Traces Volume Three ends on a hell of a cliffhanger that suggests more to come. No complaints here, as the series is a brilliantly written and illustrated blend of science fiction, action-adventure, creepy horror, and wartime heroism. 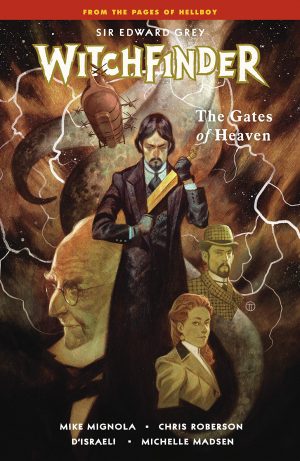