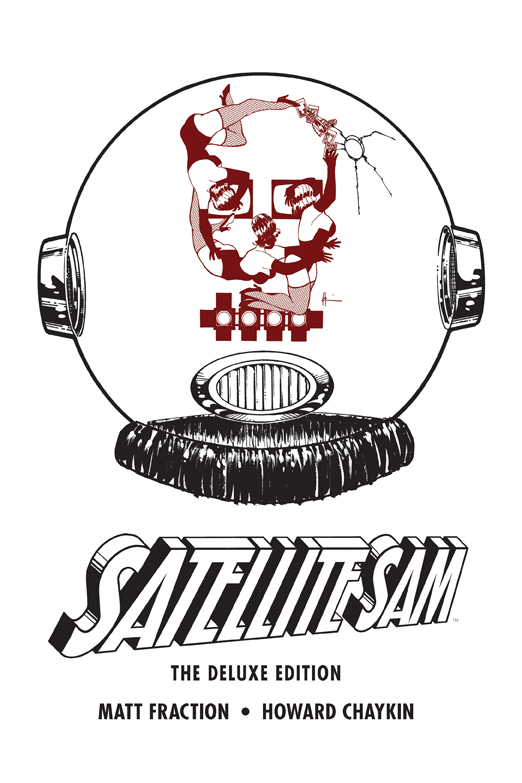 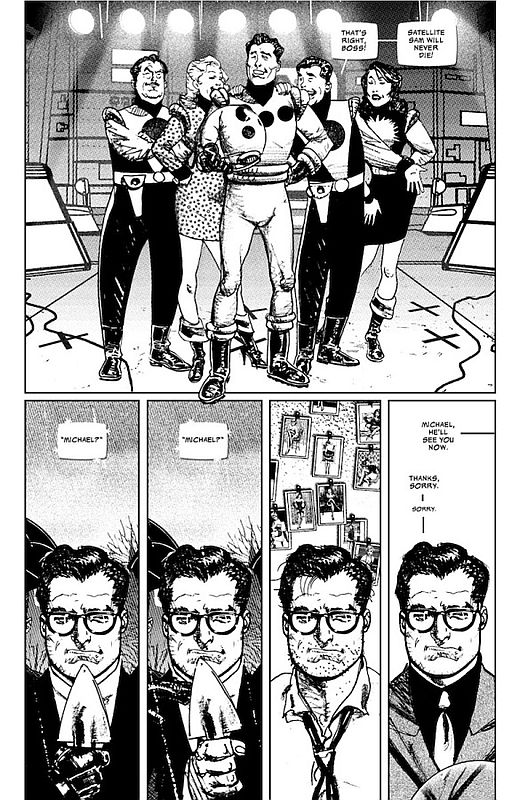 1951, a small TV network in New York. When Carlyle White, the star of a science-fiction show, turns up dead in his room, his son Michael soon finds a cache of somewhat dirty pictures belonging to his dad. Does the sudden death have any link with that? With the crooked politician in the pocket of the network owner? Or with the network owner and his dreams of greatness? Is that death even a murder?

Writer Matt Fraction and artist Howard Chaykin have created a story that starts as a seemingly classic noir tale, but veers into deeper territory, a character study deftly built through flashbacks and interactions.

At first glance, Satellite Sam looks like classic Chaykin material: a period drama with wise-cracking guys and lots of oral sex (of all kinds, it must be said). Chaykin, an artist who’s been working since the 1970s and forged one of the great comics of the 1980s with American Flagg, shows here he’s still among the best page designers in the business, with varied layouts that expertly play with the passage of time: thin, vertical panels to indicate a fast pace, three-tiered pages with images that vary only a little and produce a slow rhythm, and his patented small inserts, which zoom on faces of characters and stops, for an instant, the flow of the action. His line art is also among his best in recent years, tighter than on his superhero material. An obvious care given to recreation of the period is complemented with the patina of textures on clothes and background, for a fully immersive reading experience, thanks to the density of the art. Let’s not forget the contributions of text designer Ken Bruzenak, an old collaborator of Chaykin, whose work is at the polar opposite of the anonymous lettering of a lot of mainstream comics.

Though this is a period drama, Fraction and Chaykin are too clever to offer 1950s nostalgia on a plate. The stylishness of the visuals notwithstanding, this was a time of deeply-ingrained prejudice. Herein lies the modern aspect of the book, in its refusal to portray those times as a golden age: racism, homophobia and sexism are well present and accounted for. Among the cast of characters is a closeted, gay man, as well as a black man passing for white. Both are threatened with exposure, sometimes by violent means. The limited possibilities of social roles for women is also a theme.

In fact, the hypocrisy of a society obsessed with surface propriety is a major theme, which of course is not an original aspect of noir stories. Here it is developed in a milieu that is literally all surface and no depth, that of a TV world where a small network tries to compete with the large ones and with the regulations imposed by the FCC commission. If the fictional LeMonde network was inspired by the real DuMont, as Fraction states in the very interesting conversation with the artist included at the back of the book, its titular program also and obviously serves as a metaphor for the shallowness of society, as well as providing visual entertainment (the science-fiction serial looks as ridiculous and as fun as the real ones of the period).

Satellite Sam is the result of the work of two creators at the top of their craft. Blending sexual kinks and social themes is not easy, but Fraction and Chaykin have acquitted themselves undoubtedly well of the task.