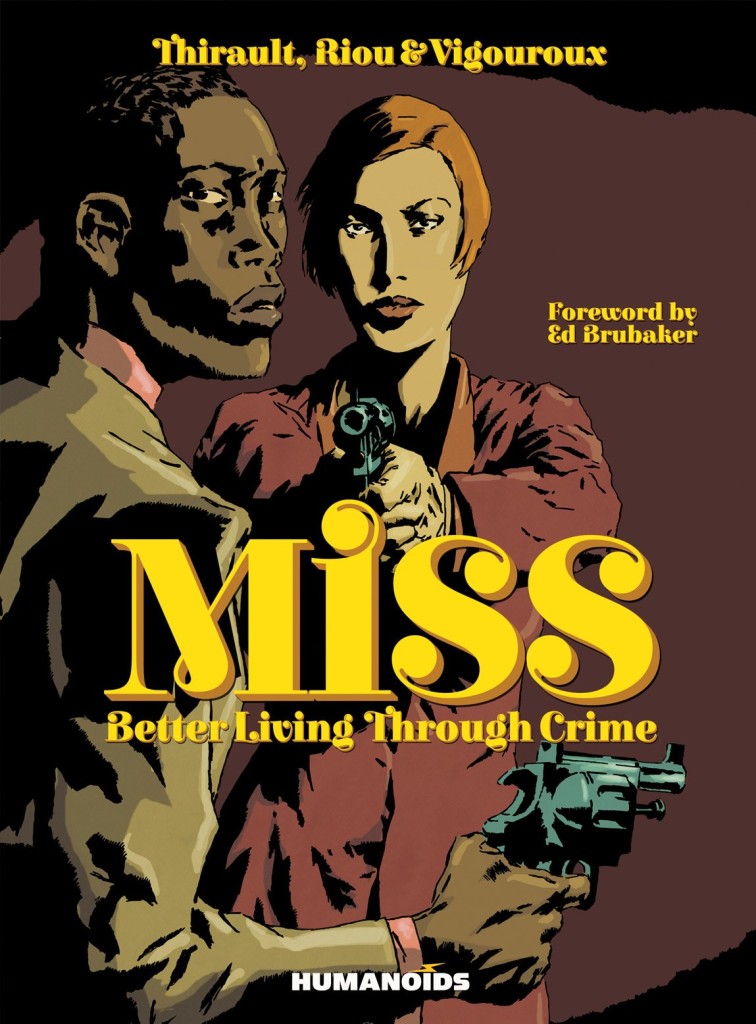 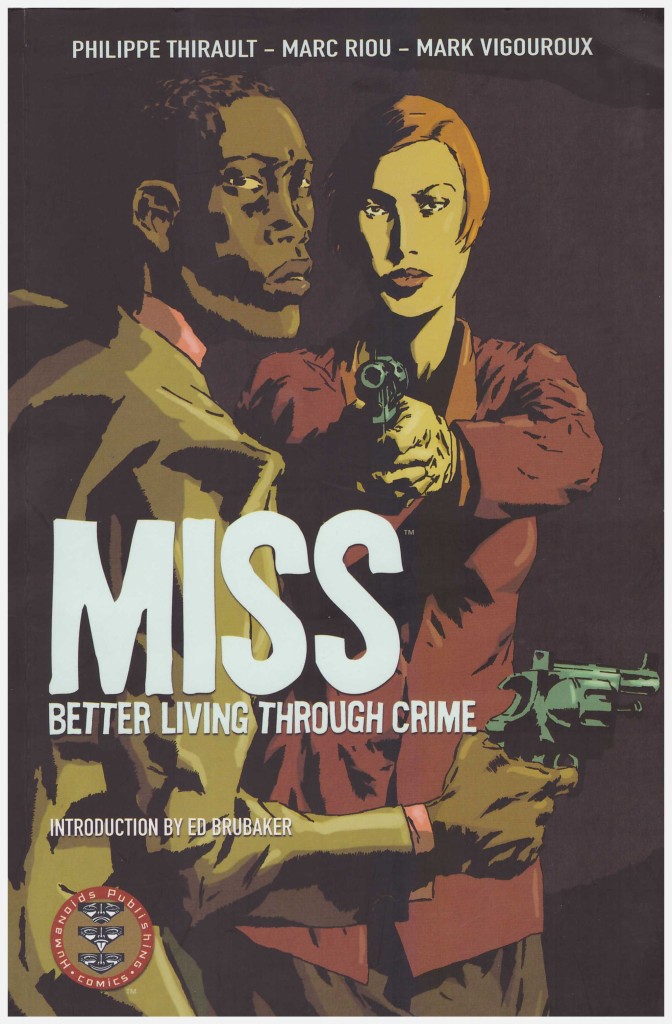 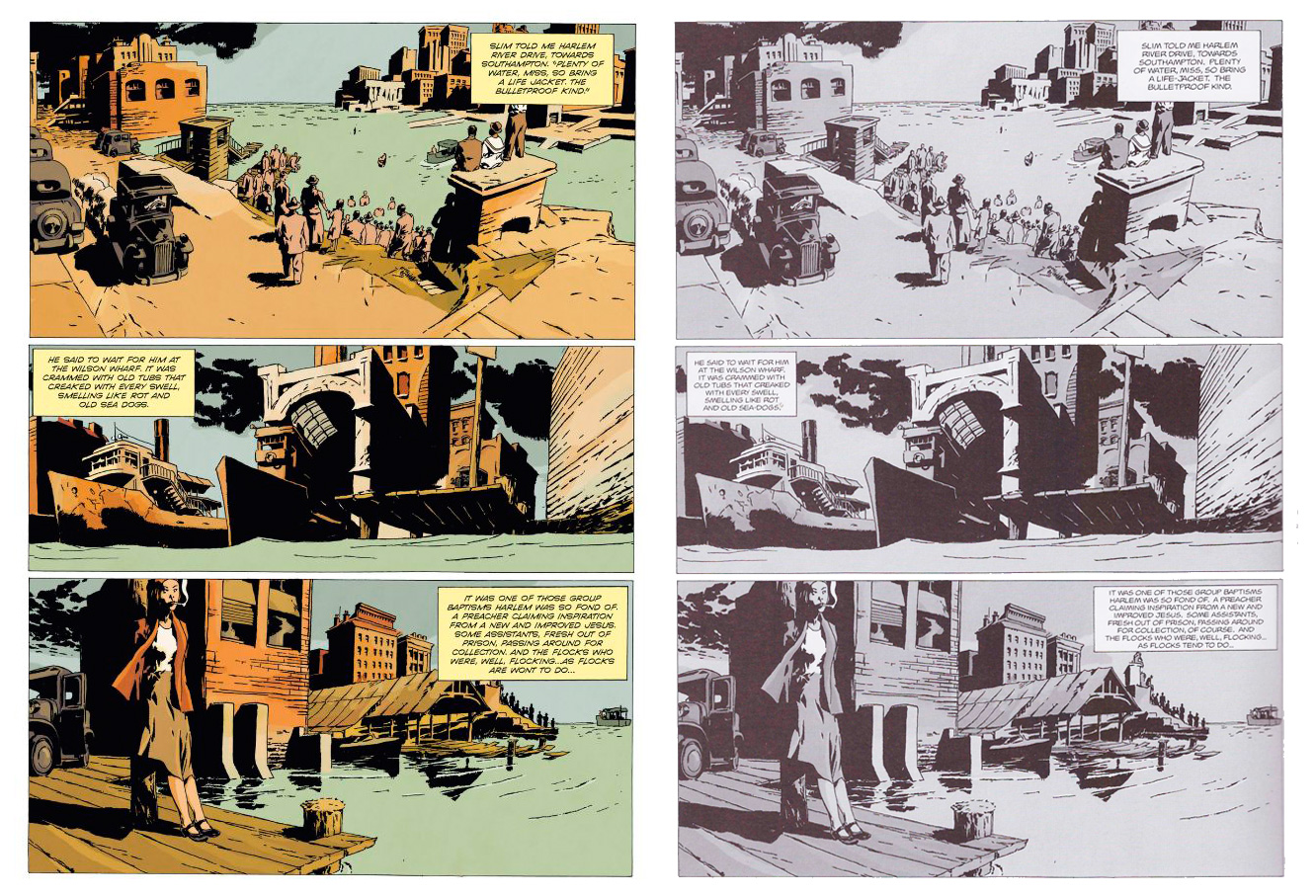 Miss opens with a vivid diorama of misery in early 1920s New York, a time when the lives of the poor and dispossessed counted for nothing, and anyone who was going to survive had to fight their way out. One such fighter is Nola, whose background over the 22 opening pages is a taut and compelling crime drama in isolation.

Thankfully, we don’t stop there. Nola allies herself with black hustler Slim Wilhite, and an economically plotted first chapter supplies all necessary details about the pair: how they interact with each other and with the world around them. From a chance encounter they become assassins for hire, surprisingly unsentimental, yet not without conscience, and taking matters very badly if deceived.

The art team of Marc Riou and Mark Vigouroux are given no more specific credits breaking down their individual contributions, and between them throw us straight into a brilliantly realised period New York where everything and everyone is grubby, distressed and sordid. They’re especially good at body language and expression. Toward the end of the first chapter there’s a fabulously snotty butler, and other notable passing cameos include a conniving frail old woman and a high maintenance girlfriend, while the artists simultaneously impart a quiet dignity to Slim’s doctor brother.

Philippe Thirault maintains the character development of Nola and Slim over four stories, which are presented as crime fiction, but are actually a strong character-based drama for which the assorted criminal activities are but window dressing. Both Nola and Slim have car crash lives, in the impulsive Slim’s case misfortune often of his own making in the first instance, his previous career hardly blemish-free. Yet step by step over a decade they progress from an uneasy trust to a steadfast relationship. Thirault is superb at dropping in moments of high tragedy and low comedy, and a good translation serves him well. He has a fine ear for sharp dialogue that never strays into being too glib, and the contemporary racism, both hate-fueled and casual, is a perpetual undercurrent and a factor both characters must deal with on a daily basis. How they cope is skilfully addressed.

Those expecting crime fiction may be disappointed by piecemeal interludes beyond the first chapter rather than a progressive plot. The criminal activity is shocking, violent, varied and imaginative, featuring all the noir trappings you could want. There are a few elements that prevent a five star recommendation, an uncharacteristic conclusion for one, but Miss: Better Living Through Crime is a fully realised drama with wide appeal.

The art differs according to which edition of the book you pick up. The original version, released in 2002 as a paperback, is greyscaled rather than coloured, but as both are perfectly acceptable the preference will be yours. Otherwise the content is the same, although re-lettered, down to Ed Brubaker’s introduction, combining what were originally four French albums.