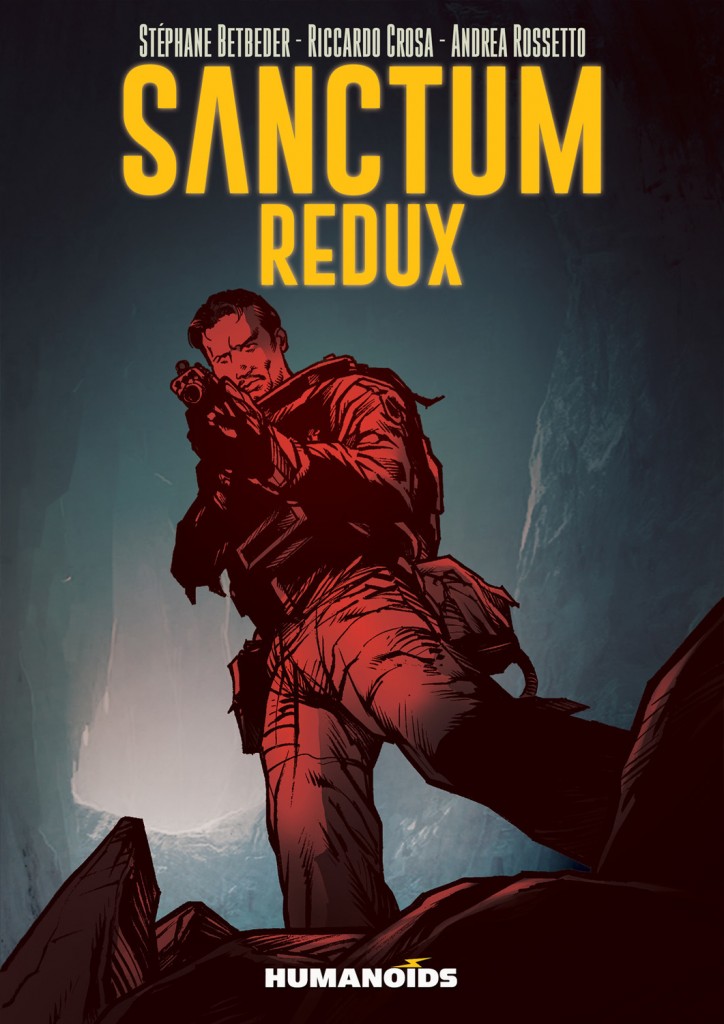 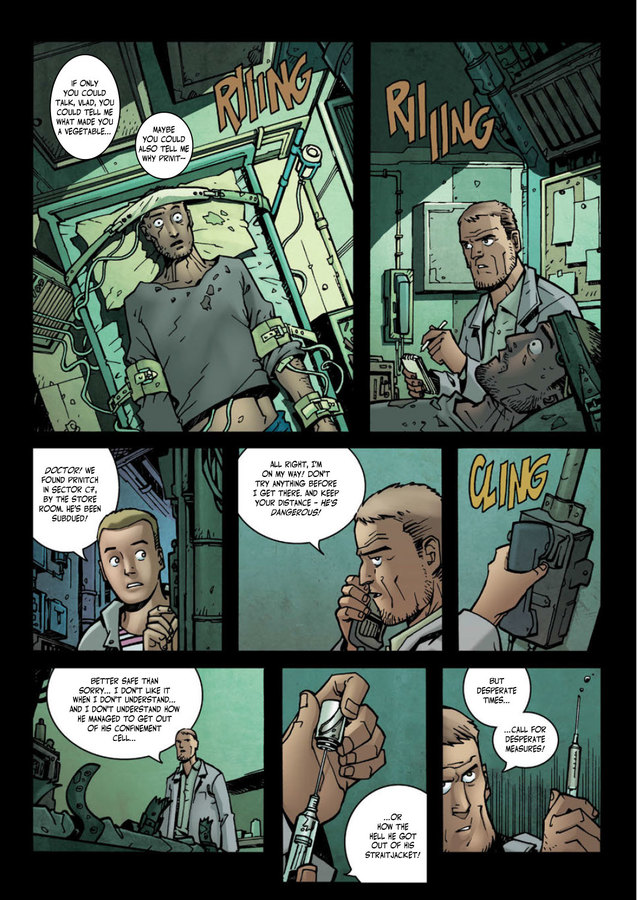 Sanctum Redux is a strange idea. It takes the superb action thriller that was Sanctum, and extends it, fleshing it out to add greater depth to the cast and background, then taking an alternative path. Publishers Humanoids compare it to a subsequent TV miniseries version of a successful movie.

So how’s the story expanded? In Sanctum the crew of submarine USS Nebraska came across a Soviet submarine from the 1950s with the entire crew dead, the puzzle being what they were doing in such a remote area beneath the Mediterranean and what happened to them. Sanctum Redux opens with a chapter explaining their problems. From there we move to the Nebraska, and then to individual crew members before beginning the mission detailed in the source material. Changes are made to original crew. Commander Hamish is now considerably older and his guilt concerns an adult son in a psychiatric facility, and two gratuitously lesbian journalists are on board during the inaugural mission. Over the first four chapters Stephane Betbeder has taken snippets of information from Xavier Dorison’s script to construct what’s in effect an entirely new prologue.

This version of the story looks completely different. Riccardo Crossa’s art is described as Manga style, but it’s not the type of Japanese comics featuring figures only and barely any background. His influence is Katsuhiro Otomo, and while there’s not the depth of detail seen in Akira, it’s convincing enough to sustain the story. Crossa’s strengths are his page designs and viewpoints, which is highlighted when the less imaginative Andrea Rossetto takes over for the final chapter. He maintains the style, but lacks Crossa’s eye for dynamic page layouts.

It’s well into the fifth chapter before Betbeder’s plot begins to segue into the original Sanctum, but shortly after begins to diverge again quite significantly. We still have a story about a submarine and its crew trapped in a very undesirable location, and there are still inexplicable occurrences, but there’s extended emphasis on events above the surface involving increasing political problems. There’s also considerable tension in the submarine and Betbeder extracts and greatly prolongs a plot about a matter that splits crew members while also taking increased dips back into the past.

The resulting story hangs on the bare bones of Sanctum, but is a very different beast with a greater reliance on the horror/action thriller movie template, but unfurling at a very leisurely pace. It’s good overall, but some aspects are clumsy, among them the inclusion of the two reporters. There’s no reason for them to be lesbians, and characterising them as such is unconvincing as inclusion, not least because they’re never named beyond Ms Ledoux and Mariam. They serve a narrative purpose in the early stages of the book, and are then all-but forgotten for the remainder until Mariam is needed in the final thirty pages. It’s also problematical when scenes set in the past have a greater emotional weight than many of those set in the present despite the care taken to characterise the submarine’s crew.

Having built up the plot professionally, Betbeder’s conclusion is disappointing. It differs from Sanctum, and it ties together what appeared only mildly related plot threads, so is unpredictable, but it induces a shrug of the shoulders rather than gasps of astonishment, and as it takes 550 pages to reach that point there should be an expectation of far more.

Sanctum was a tense and delicately plotted slab of excitement, and digging deeper into the detail while diminishing other elements produces a lesser work.