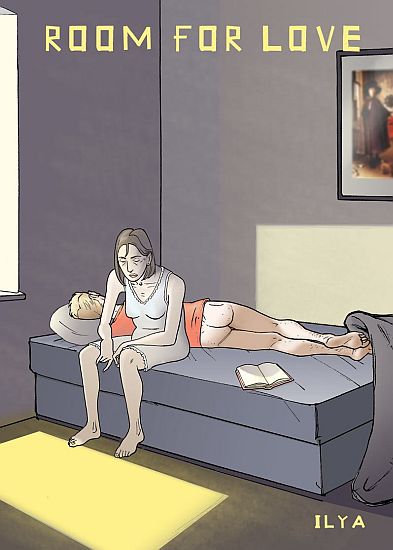 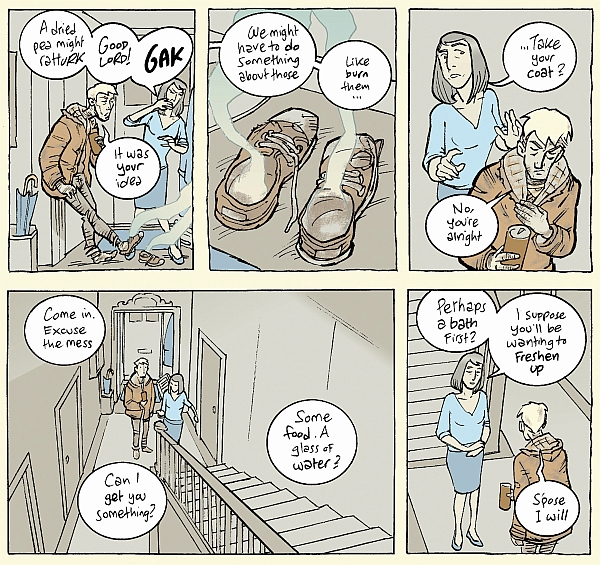 Ilya (the pen-name of Ed Hillyer) is an author who’s published far too little. His The End of the Century Club graphic novels met with critical acclaim in the 1990s, but it’s been a decade since his last creator-owned graphic novel (of note is his contribution to the anthology It’s Dark in London). The publication of Room For Love in 2015 was therefore a cause for celebration.

Frank is a young rent boy, who lives in the streets. He has no difficulty finding men ready to pay him for sex, but he keeps his cards close to his chest. Pamela is a successful middle-aged romance writer who’s lost her will to write and is in the process of losing much of her interest in life. They meet quite by accident and Pamela finds herself offering a room to the homeless youth. An uneasy cohabitation ensues.

Frank and Pamela play a game of cat and mouse, though the identity of each is not as clear as one might think. Is one of them looking for love? Are both of them? Do they know what they’re looking for? In fact, Room For Love is not a love story, but a story about love, as is attested by the dialogue about the various Greek words all translated by the word “love” (philia, eros…). Some form of friendship does develop between them, some sex also happens, but thankfully doesn’t answer any questions the reader has about the characters. The boy and the woman are believable human beings and thus not easily reduced to soundbites.

As Ilya has explained in the series of posts he’s written about the decades-long creation of the book, the germ of the story came from a true story, that of Germaine Greer inviting strangers into her home (Greer has a secondary character named after her in the book). Ilya combined that with his own brand of realism and his perseverance over the long years it took to get this book published.

Coloured in two colours (one for each characters’ sequences) and drawn in a sketchy, pared-down style that is a departure from his more detailed art, with his usual busy and varied panels replaced by an effective use of very regular layouts that will certainly be easier to read for casual comics readers. The art is as unsentimental as the dialogue or the characters themselves.

Ilya manages to avoid the endless possibilities for tear-jerking effects, while giving his characters their spaces. The result is that we don’t know everything about them we’d like to by the end of the book, much like in real life. Pamela is more forthcoming than Frank, obviously less prone to lying to him than he is to her. Though both characters lie to themselves about their hopes, fears and desires, Ilya manages to give them some opportunities to know themselves better without contriving a Hollywood happy ending.

Though one might expect a sombre tone for such a story, there’s a lot of humour in the situations and dialogue. Ilya is very good at playing with words, at writing dialogue that works on multiple levels. His characters also retain a form of distance from themselves that leads them to welcome self-criticism, often through humour, and contributes to the lack of sentimentality.

Room For Love is a solid example of Ilya’s talent as a writer and as an artist and one can only hope there won’t be another decade to wait before his next graphic novel.