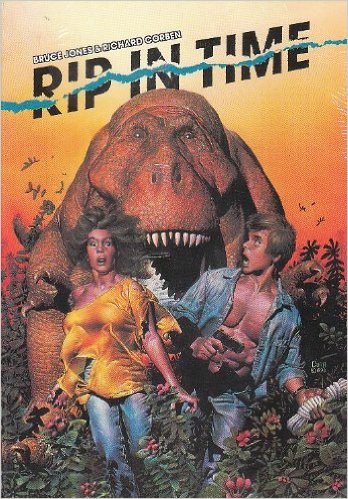 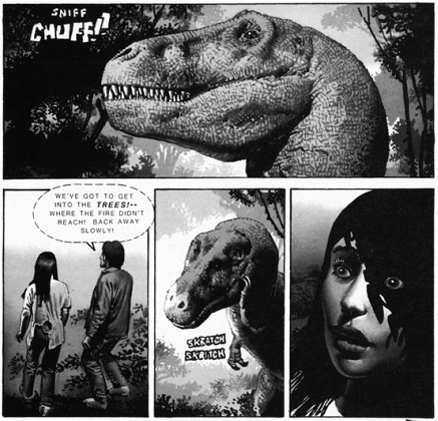 Rip in Time, written by Bruce Jones and illustrated by Richard Corben, is basically a reworked version of ‘Within You… Without You’, a story they’d produced for Eerie magazine. Corben has often used others as inspiration for his own work (especially Lovecraft and Edgar Rice Burroughs) and Rip in Time is a mash-up of Arthur Conan Doyle’s The Lost World with H. G. Wells’s The Time Machine, all given a 1980’s action movie makeover.

Rip Scully, an LAPD Homicide Detective, and his snooty rich bitch girlfriend, Maggie, are on their way to a party when they stop to pick up some booze, where they become involved in an armed robbery by scumbag Sid Resnick and his girl, Darlene. Sid takes Maggie hostage and drives off in Rip’s car. Rip returns the favour by taking Darlene prisoner and setting off in hot pursuit in Sid’s car. The lead car drives off a cliff, and straight into a top-secret military facility that’s running tests on a time-travel machine. Before you know it, all four are catapulted back to Jurassic times, trying to avoid becoming lunch for hungry pterodactyls or getting trampled to death by herds of triceratops.

To complicate matters further, a psychopath is sent back after them. His mission: to ensure that no one gets back alive. To say more would give away too much. Suffice to say that there’s never a dull moment.

Much like the previous story, the plot doesn’t stand up to a great deal of scrutiny, but that’s true of most time travel stories, often tying themselves in knots with what Doctor Who’s Steven Moffat calls ‘timey-wimey stuff’. The end of this book sets things up for a sequel, which never appeared, though that is the nature, and one of the weaknesses, of this type of story: there’s nothing to stop you going back time and again to try to fix things.

Jones’ writing, though not terribly sophisticated or clever, does manage to pack in many dramatic moments and cliffhangers. Many of the characters are two-dimensional, with much of their dialogue ringing false, and some of the gender politics are questionable.

However, as is often the case with anything Corben collaborates on, his involvement elevates the whole venture to another level. The story gives the artist ample opportunity to illustrate dynamic action sequences, whether with dinosaurs or humans. It’s not Corben’s best work (whatever that might be, it would be something in colour), but does contain a great deal to admire, from photo-realistic depictions of mice and owls, to furious dinosaur battles. And it’s fun spotting all the nods to (the original) King Kong movie. The art is very dark, but that’s not down to poor reproduction, it’s just the way Corben draws, though it must be said that his lettering is rotten. And there are, of course, lots of beautiful women getting soaked, rolling around half naked and generally looking delightful, though there is no nudity, as Corben was finding it difficult to sell any of his more adult work because of the political climate at the time.

A must-have book for any serious Corben fan, one that manages to break the rule that nothing with an awful pun for a title is any good.