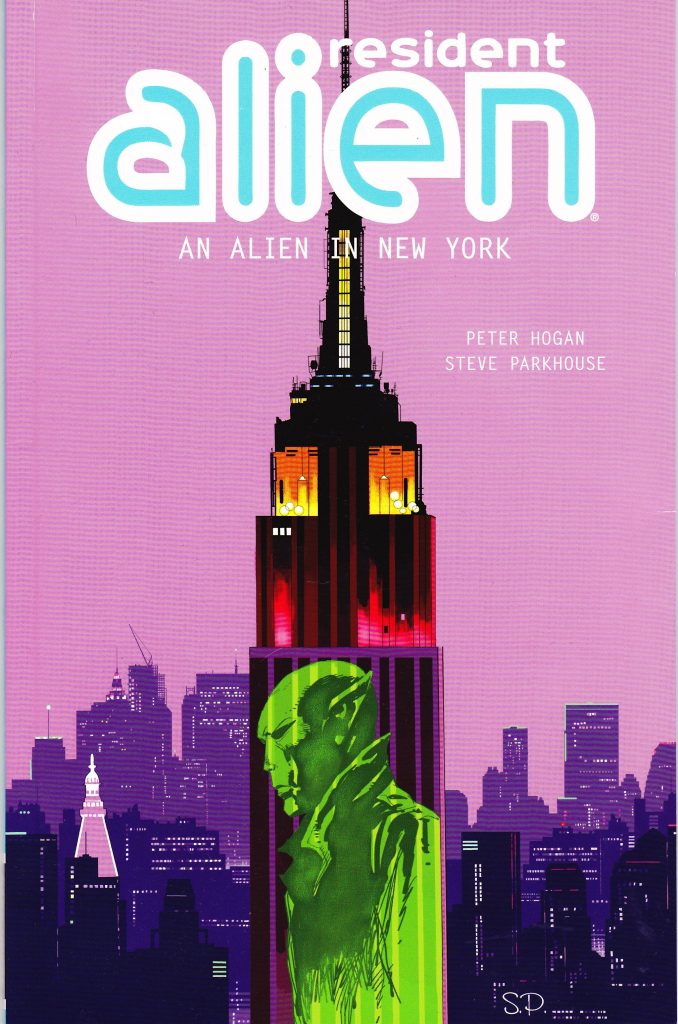 Harry Vanderspiegle is a physician in the small American town of Patience. He also happens to be an alien pilot stranded on Earth who’s made friends with the local populace while waiting for rescue, among them the shaman Dan Twelvetrees and his daughter Asta. Dan understands all too well what it feels like to be different and still try to be “normal”, one reason he has become Harry’s confidant. Harry’s survival trainer warned against this and when a little girl sees through his telepathic camouflage and draws a picture of her favourite Doctor Harry, it threatens his safety and sends him into panic. Toying with the idea of leaving Patience he happens to see a documentary about a mysterious artist named Goliath. In his paintings are mysterious symbols Harry can read. Intrigued Harry and Dan travel to New York to investigate the artist’s disappearance but will they find answers to their questions or walk into a trap?

An Alien in New York is the fifth volume of Peter Hogan’s and Steve Parkhouse’s avant-garde science fiction series. Compared to previous books this is a deeply personal tale, Hogan weaving in his own experiences as a young man living in New York, and artist Parkhouse illustrating them so beautifully that the memories feel as if they are the reader’s own. It’s also a reflection on immigration, an emotive issue in the United States, Hogan looking at it through the eyes of an immigrant. While it isn’t an angry swipe at establishment neither does it whitewash the struggles of immigrants and examines the reasons people look for a better life elsewhere, something Parkhouse brings to life. It is sensitively handled with an honest recognition that it is easier for some than for others. The narrative is interspersed with little nods to art and artists, music and musicians and all the people met during Hogan’s time in the Big Apple, the writer’s passions adding an emotional depth that is easy to relate with.

Parkhouse keeps the setting intimate by using a multi-panel format where only a few people can be in the frame at one time, focusing specifically on the cast and their interactions. Simultaneously these smaller panels generate a feeling of mystery that builds tension as Harry and Dan head into the unknown, augmented by the colours he uses for each scenario. His strongest talent as an artist is that he can make the cast feel real, like people we meet every day, by capturing those awkward moments that make us so vulnerably human: passion, guilt, shame, lust, dismay, recklessness, fear, hope and secret love. It’s a deliberate choice to use a familiar pop culture image to portray Harry because it doesn’t perpetuate an idea that aliens (of any description) are aggressive entities intent on erasing our cultures and replacing them with their own. Instead Harry feels like a normal emotional being that looks different but is trying to come to terms with never seeing his home again. Does he keep waiting or give up and embrace the new life he has invented for himself? It’s an engaging plot and every gesture of every species Parkhouse illustrates only engages the reader further.

An Alien in New York is science fiction cut through with a slice of life, rolled in a healthy dose of mystery. It straddles the line of being mainstream and indie, a memoir of a formative time in a city full of people – fragile, hopeless, competitive, happy and lovelorn people. It’s why Resident Alien works and the only disappointment is waiting a whole year for the next instalment. The series concludes with Your Ride’s Here. 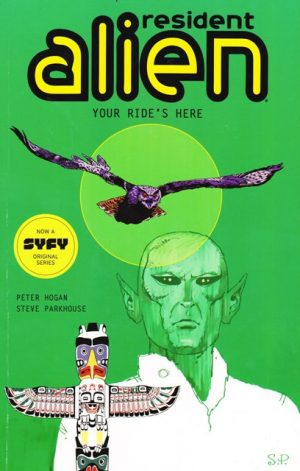