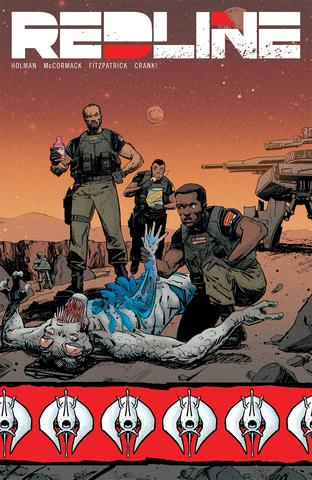 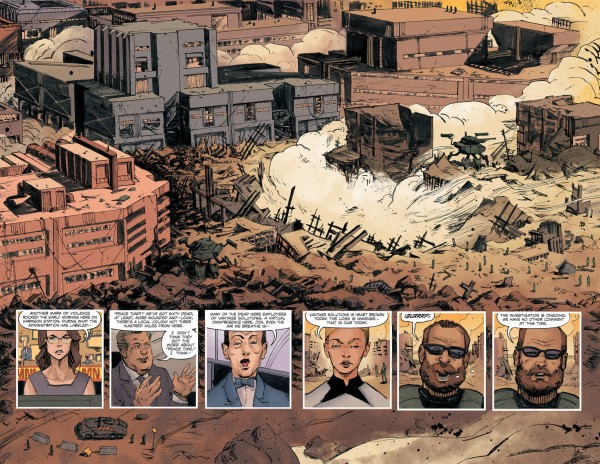 Neil Holman and Clayton McCormack’s gloomy and brutal science fiction graphic novel concerns Mars colonised by American settlers. However, the dusty conditions, squads of mercenaries, living with the possibility of locals engaged in ‘terrorist’ activity and the presence of corporate slime who see money making opportunities in chaos actually speak of areas closer to home in the present day. This form of social commentary, however, is only the window dressing for what’s a taut action thriller, one of those graphic novels you’d imagine could be transferred to cinema with very little changed.

Holman doesn’t exactly hide his villains under a rock, and the thread of the plot eventually becomes how and why rather than who. It’s glued together by Denton Coyle, from whose viewpoint almost everything is seen. He’s been working protection on Mars for almost twenty years and now pops a lot of pills to see him through the day. He knows everyone, and they know him as a hard-nosed bastard who’s not to be crossed. He’s used to colleagues dying, but doesn’t like it, and when he starts investigating a suicide bombing, events just become dirtier and dirtier. Harmon characterises Coyle and his colleagues well, establishing the cameraderie of the combat squad via aggressive, bickering dialogue, and guides the plot to a conclusion that’s extremely well set up.

McCormack plays a great part in creating Redline‘s downbeat seedy atmosphere. His cast are grubby and run down, look exactly like what they’ve been through, and their surroundings are equally bleak. A good touch is that there’s very little in the way of middleground between the atrocious day to day conditions and the sterility of the uniform luxury apartments McCormack designs for the indulged and wealthy.

Take out the swearing and sexual references, and Redline’s very much like the strips that ran in the early days of 2000AD. A bit more complex, perhaps, but featuring a complete brute who comes through no matter what’s ranged against him, and throws it back in the face of whoever’s at his throat, with a satisfying side dish of revenge. It’ll hook you and keep you hooked.