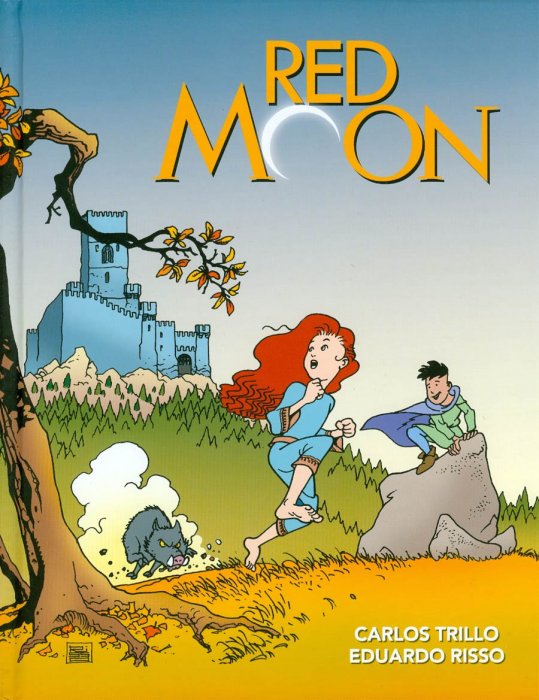 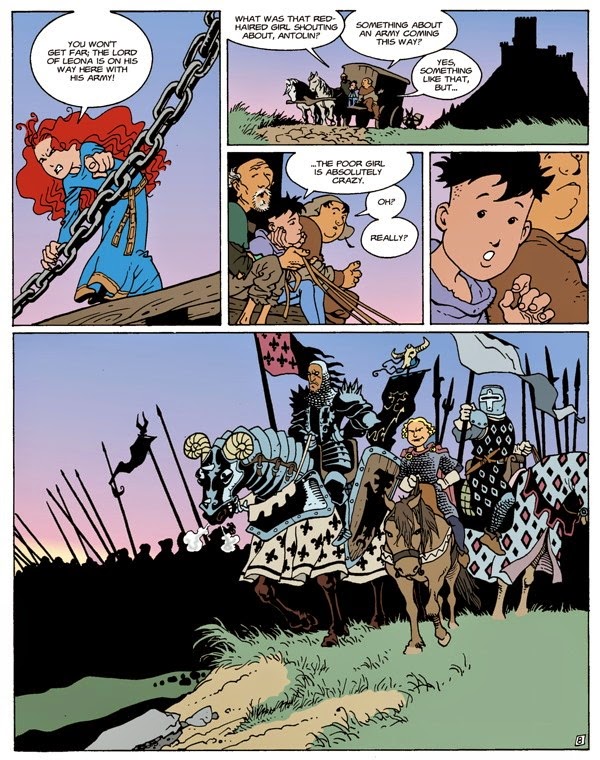 When considering all-ages fantasy graphic novels Eduardo Risso isn’t the first artist that comes to mind. After all, this is the man who illustrated the gruesome dystopian atrocities of Borderline, and the blood-spattered organised crime of 100 Bullets. Surprise! This is a master artist at work and he can turn his hand to anything, so Red Moon looks as spectacular as his other works. What’s usually so distinctive about Risso’s pages is a mastery of light and shade to create a foreboding atmosphere, yet the generally safe mood required for all-ages removes this trick from his arsenal and his pages still look great. Moon’s distinctively bright red hair instantly draws the eye in any panel in which she’s present, and Risso’s facility for distilling each panel to its essence serves well in telling the story and in creating dozens of memorable images through the book. The look is something that enchants immediately, whether you’re familiar with Risso’s art or not.

Our introduction to the cast of what grows into a magical medieval epic is via Antolin, curious acrobat orphan accompanying other circus performers. They’ve arrived in Burien, where gloom and despondency have been the prevailing states since the ruler’s wife died. His daughter Moon refuses to believe this, and she’s accompanied by her invisible friend Bran. Both serve her in good stead when the neighbouring kingdom attack and her escape leads her back to Antolin. Moon actually has good reason to believe her mother still lives, and Antonin becomes embroiled in a quest that pulls the cast all over the place as Carlos Trillo throws in one magical element after another guaranteed to enthral children and charm adults. We have floating castles, mythical creatures, magical artefacts, evil witches and other suitably nasty villains.

Trillo’s constructed his background well. There’s a viable, human, reason for what’s happened in Burien, and in the second book Moon and Antolin gather comrades with special talents to ensure Burien’s restored to normal. These people, however, have unusual abilities that at first glance may seem to serve no purpose, but have some faith.

This value for money hardcover combines all four original European editions, and there’s a natural conclusion at the halfway point before a two further quests. These are darker tales, with more grotesque beings, and the contents of Risso’s black ink bottle diminish again. Neither matches the opening two chapters for inventiveness, and the padding is far more apparent, particularly in the fourth book, although that’s the better of them, with a rampaging evil giant seemingly impervious to harm threatening to take over Burien. Moon must find the only way to defeat him before her father dies in combat.

Moon is spirited, generous and loyal, the type of fairy tale heroine any child can look up to, and Trillo creates enough busy experiences around her to keep any child thrilled. Adults who pick up on the later padding can marvel at Risso’s glorious pages.