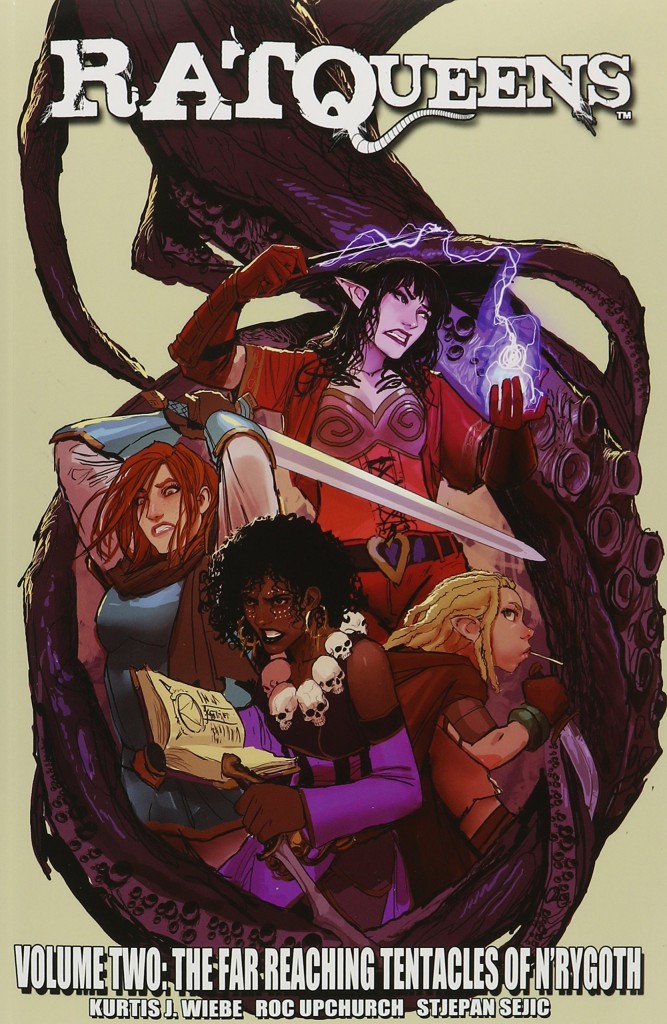 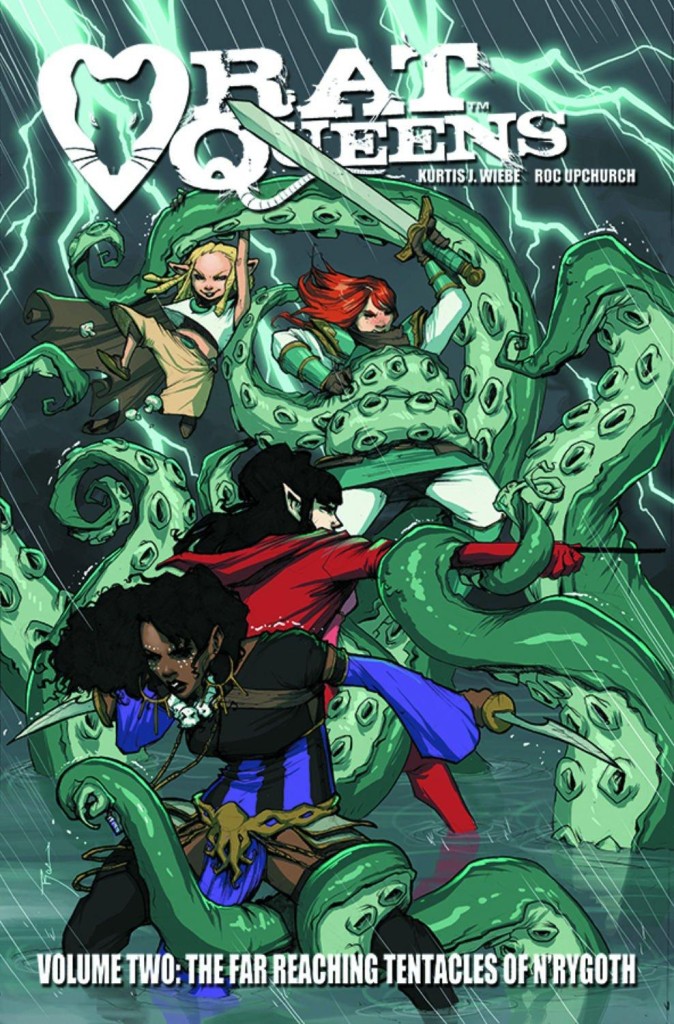 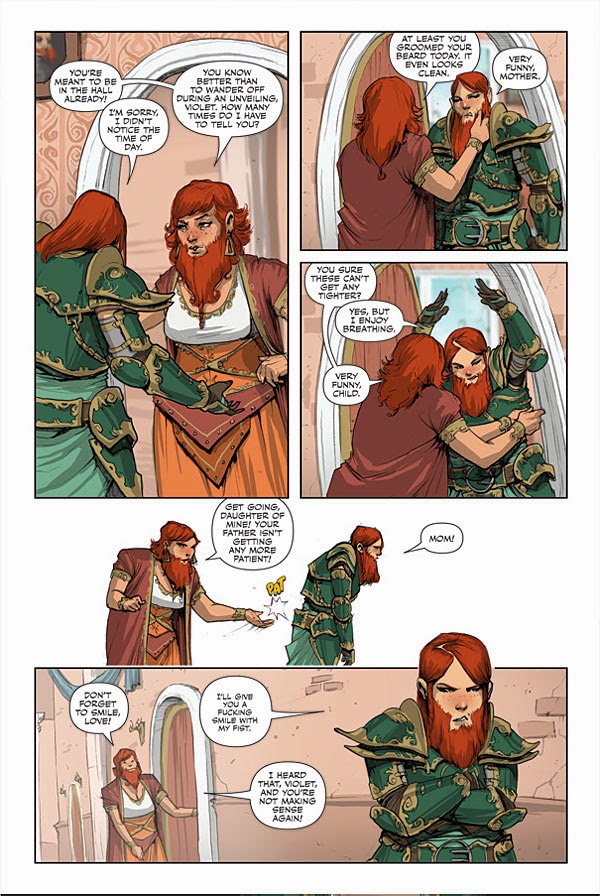 The Rat Queens find themselves in the unusual position of actually being needed in this outing, even if they are up to their usual mischief. Hannah, Violet, Dee, and Betty’s heroic efforts in defending Palisade from attack (which was partly their fault anyway) earned them some gratitude but more importantly: gold and work. Things never stay hunky-dory for long where our ladies are concerned, and before you know it someone has unleashed the powers of Dee’s deity N’Rygoth (whose existence she doubts) on Palisade. Sawyer continues to investigate the assassination attempts on the mercenary bands, finding more than he bargained for, while Dee reveals some surprising news to the girls when a visitor from back home appears.

Relationships are the central subject matter here, from familial bonds to romantic liaisons, Kurtis J. Wiebe using it to develop his ladies’ respective back-stories a great deal more. There were some topics like the effects of religious indoctrination introduced in Sass and Sorcery, but left hanging, that are tackled here. To Wiebe’s credit he doesn’t vilify anyone for their beliefs, choosing instead to look at the subtle effects our cultural upbringing can have on us. His dialogue is as funny as ever, yet doesn’t interrupt the drama as much as it did in Sass. The humour fits the situation, acting as a comic foil without drawing attention away from the point Wiebe is making. It has improved the story that little bit more, especially with this much darker context. Hannah, Violet, Dee, Sawyer, Orc Dave and even guard sergeant Lola (a welcome addition) are all progressed, yet Betty still feels under-developed, albeit hilarious as the ever-loyal and ditsy airhead. Perhaps Betty is meant to be this straightforward, but there seem to be hints of more to her that never really materialise. There is also the rather small matter of Wiebe using flashback sequences that fit well with the nature of the story, although leaving the reader slightly disorientated over the last few pages.

Roc Upchurch keeps to the high artistic standard he set in Sass, experimenting more with landscapes and wider frames, adding nuance to the world the Queens inhabit. Among the stand-out scenes is the group handling a tribe of rampaging mushroom men who are suspiciously phallic shaped, much to Betty’s delight. Fans were understandably concerned when Stjepan Sejic took over the illustration midway, but need not have worried. The styles are similar, except Sejic adds slightly more detail to his work and applies a bit more colour, especially where battle scenes and monsters are concerned. It brings a gritty realism to deadly situations, elevating the story and balancing the comedic dialogue. The art has improved, but readers should still be aware that Rat Queens contains scenes of an offensive nature. That’s if Hannah’s potty mouth didn’t offend you before that.

The beauty of Rat Queens, aside from its main characters and dazzling art, is its brilliant supporting cast who are quickly becoming iconic in their own right. Braga, Tizzie, Orc Dave, Lola and Gary are excellent additions, Wiebe knowing just the right moment for them to make an appearance. They are as relatable as the Queens, their problems and personalities mirroring our own. He has created a story that has an almost continuous flow over two books, and by the end of this volume we are already being set up for Demons. Bilford Bogin! We can’t wait! Alternatively that’s available with this in the first Rat Queens Deluxe Edition.