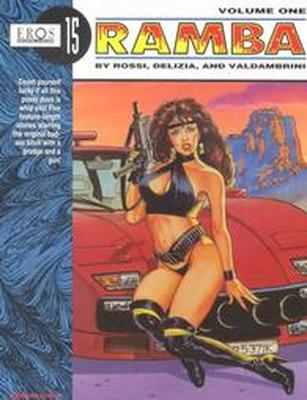 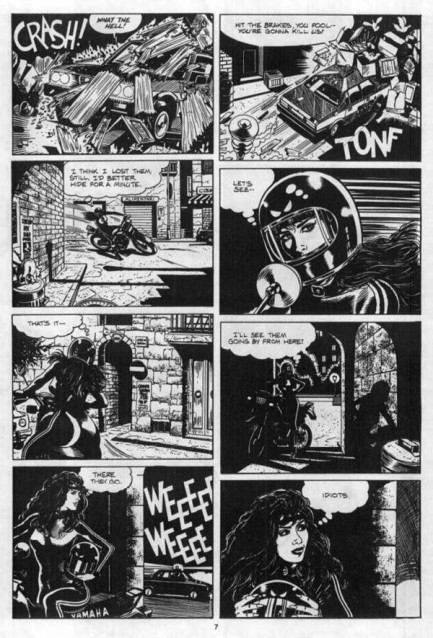 Ramba is a hitwoman by trade, and a startlingly attractive one who likes to indulge herself in every way possible. While not exactly with a death wish, perhaps at some level this is connected with the subliminal knowledge that her trade isn’t one known for longevity. We first meet her in a hotel room being shagged every which way before making her excuses and leaving on her motorcycle. Reckless riding attracts the attention of a passing police cruiser that she eludes by turning into an alleyway. The thrill is such that she has to pull open her leathers and start fondling herself, at which point she’s interrupted by a pair of would-be rapists. Their mistake. By the end of the chapter she’s urinating into the mouth of a soon to be dead man and then making use of what must be a record for rigor mortis affecting an appendage. Yup, all good clean fun, but not for the kids.

The oddest thing about Ramba, though, is that it’s not tossed off fantasy, but in the tradition of European erotica. There’s more plot to the following chapters and Rossano Rossi’s scripts work as neat little crime and revenge dramas, which is quite some achievement considering half of every 22 page story is occupied with sex. As noted, Ramba’s appetites are voracious, and she’s unconcerned about gender as long as her partner is attractive. They certainly are as depicted by artists Marco Delizia and Fabio Valdambrini. Delizia’s work as per the featured image  is characterised by a loving attention to detail, particularly where genitalia is concerned, and a heavy use of black ink for contrast. Valdambrini works more in the old 1940s American newspaper adventure strip style, with looser figures and more shading.

An association of sex with violence is never ideal. It’s established that brutality against women is something Ramba can’t countenance, but she’s otherwise amoral as long as she’s paid. Ramba, though, is first and foremost sexual fantasy. Only the extremely repressed lack them in some form, but Ramba is the more extreme end of indulgence, to the point where some relatively open-minded people may be repelled by her activities. If that’s you, stay well away. As far as explicit English language sex comics are concerned, Ramba is near enough the gold standard. Two further collections follow. 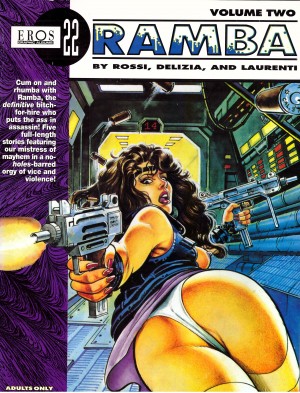 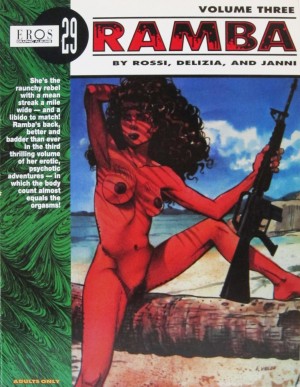