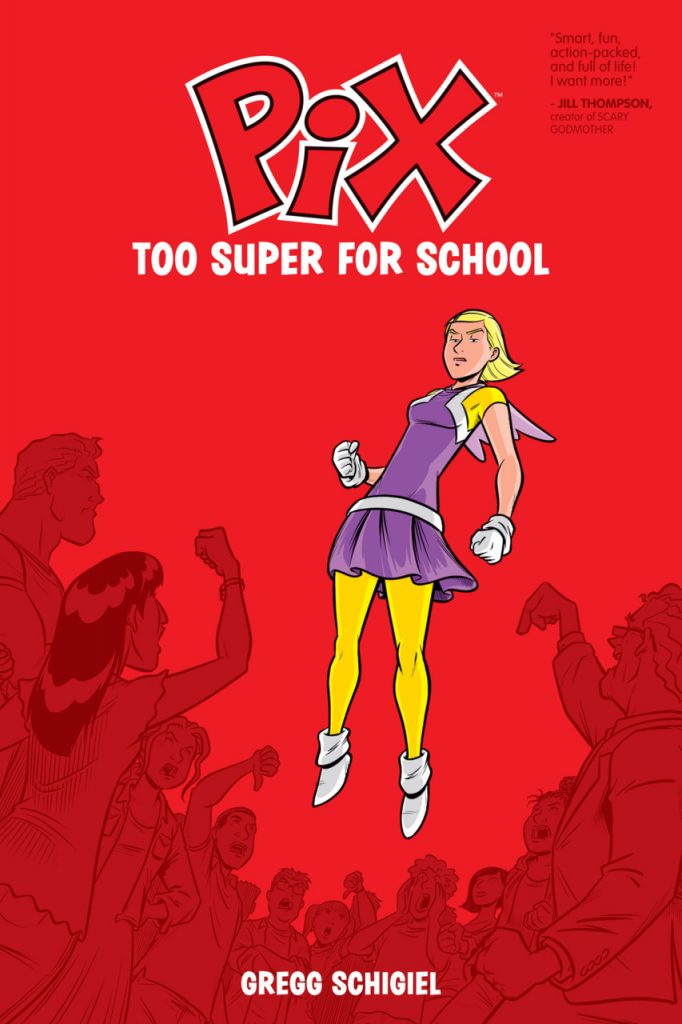 To some readers Pix will already be a known quantity, the cute teenage superhero who’s fought off a dragon and been transformed into a rabbit, as seen in One Weirdest Weekend. So what’s it like for a superhero at school? Well, most of this sequel is spent there, and it turns out there’s the same collection of creeps, bullies and nerds as found in most schools, and just because Pix has super powers doesn’t mean she can lay into them. Plus the situation is complicated by the arrival of Lorne, from another realm, polite and fawning with Pix, but arrogant and unpleasant with almost everyone else, although his awkward and formal way of speaking is a funny touch.

Although there are situations where Pix needs her super powers, Gregg Schigiel has switched the emphasis for Too Super for School, treating it largely as a comedy drama where school is the primary location. It appears an odd decision as it sacrifices much of what made Pix unique. To an extent Schigiel’s aware of that and makes it the focus of a story where Pix just wants to be plain Emaline. Because she has super powers it’s an exaggeration, but Schigiel’s telling a story for everyone who feels they don’t fit, showing that just because someone appears to be a certain way doesn’t necessarily mean they are that way. For all that, it sacrifices so much. The cartooning is good, and the situations are well handled, but Too Super for School could be any number of 21st century graphic novels about high school problems. See the list of recommendations for a selection.

Schigiel builds everything toward the school prom, where the message is that everyone is individual, and there isn’t really such a thing as being normal, just conformity. It’s only in the final quarter that Pix moves back into the type of material that makes it more special, and we’re given the rundown about a lot of matters that affect Pix herself. The good news is that it adds to the mysteries introduced before, indicating we’ve still to learn a lot about Pix. The bad news is Too Super for School was published in 2017, and there’s been no sign of a follow-up since.