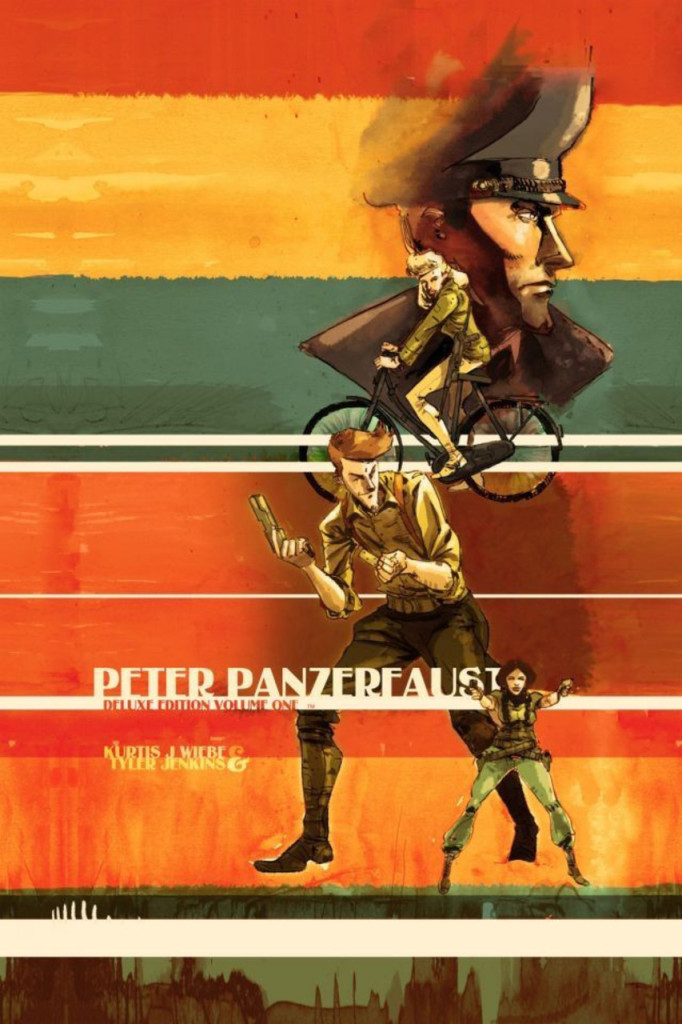 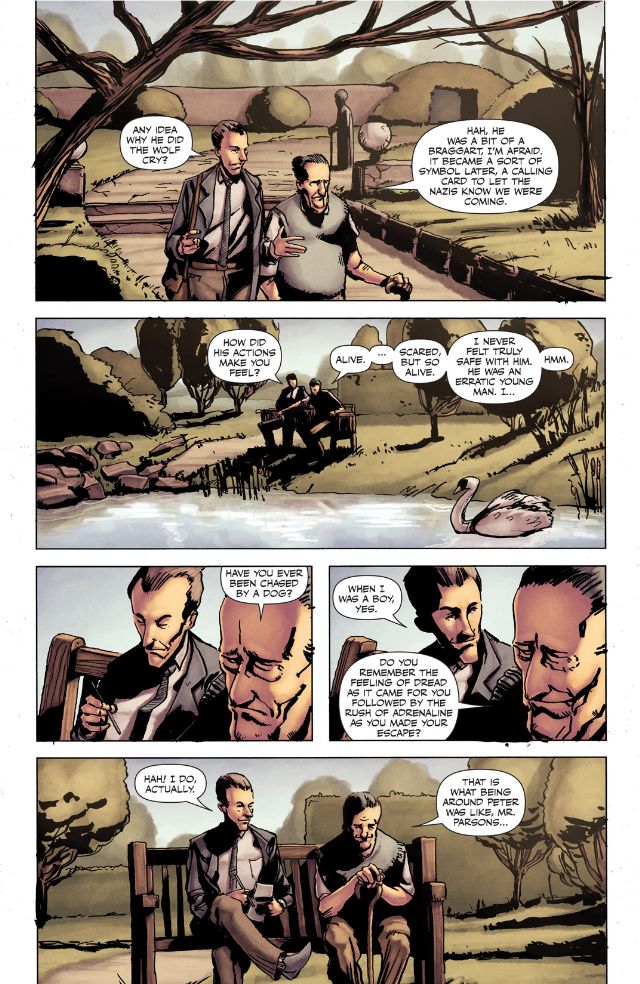 Re-inventing or re-interpreting J.M. Barrie’s Peter Pan, in literary or cinematic form, can be hit or miss. Kurtis J. Wiebe and Tyler Jenkins then, should thank whatever deity(s) they may or may not believe in for their phenomenally successful Peter Panzerfaust, so popular that it sold out more than once during its run. Collected here are the first two volumes, The Great Escape and Hooked.

Wiebe and Jenkins retro-fit Peter Pan and Co. for the 21st century, grounding their adventures in the reality of World War II and removing the magical elements. Peter is an American boy searching for a woman named Belle, meeting Gilbert (Tootles), Julien (Curly), Felix, Alain, Claude and Maurice in the rubble of their bombed orphanage in Calais as the Nazis begin their invasion of France. Forced to fight in order to survive they escape to the French countryside where they meet the recently orphaned Wendy, John and Michael Darling, children of a British businessman whose plane was shot down as the family tried to escape back to England. As the story contiunues they meet others based on counterparts from Barrie’s stories, including the beautiful Lily (The Tiger), her father and leader of the French resistance Sacha (a Canadian Sioux living in France affectionately known as Big Chief), and of course, Peter’s nemesis SS officer Kapitan Haken – The Hook. While Peter Pan was about children who never wanted to grow up but had to, Peter Panzerfaust is about the stripping of childhood innocence as each teenager is forced to grow up before their time in the harsh reality of war.

Wiebe’s story drips with bold adventure and the brashness of youth, but is tempered with reality and tragedy too. Some scenes that he and artist Tyler Jenkins conjure can stir a rousing cheer, provoke deep thoughtfulness, or bring a lump to the throat and a tear to the eye. Wiebe tell’s Peter’s story in flashback and from the respective elderly perspectives of Gilbert and Julien. In the process, characters normally in the background stand centrestage and this is arguably a strong factor in the series’ ongoing success.

These are imaginary characters, but still real people with strengths and flaws like any other, Wiebe not painting Peter, Haken, or their crews as black or white. Simultaneously Panzerfaust isn’t fully grounded in realism either. Wiebe sticks to a fast paced story where his protagonists are members of the inevitably victorious Allied forces, while Jenkins uses very simple backgrounds, watercolours, and unrealistic facial features to help temper the tone. Where it works is with its portrayal of human qualities like fear, hope, anger, love, courage and honour. It is a very satisfying read and offers an interesting perspective on what young people may have experienced at the onset of the War.

The Deluxe Edition collects some brilliant cover art by Jenkins inspired by wartime posters. It is very difficult to choose one that stands-out; they are so well done each reader is bound to have their own personal favourite. This hardcover, though, hasn’t reached the best of the series, but is still very good. The creators really hit their stride in volumes 3-4, yet to be collected into a Deluxe Edition (rumours abound, but nothing definitive yet).

Liking Barrie’s book is not a pre-requisite for diving into Peter Panzerfaust, as this is a quality tale that requires no familiarity with the source material. It stands exceptionally well on its own and is a worthy addition to Image Comics’ ever growing stable of great tales.