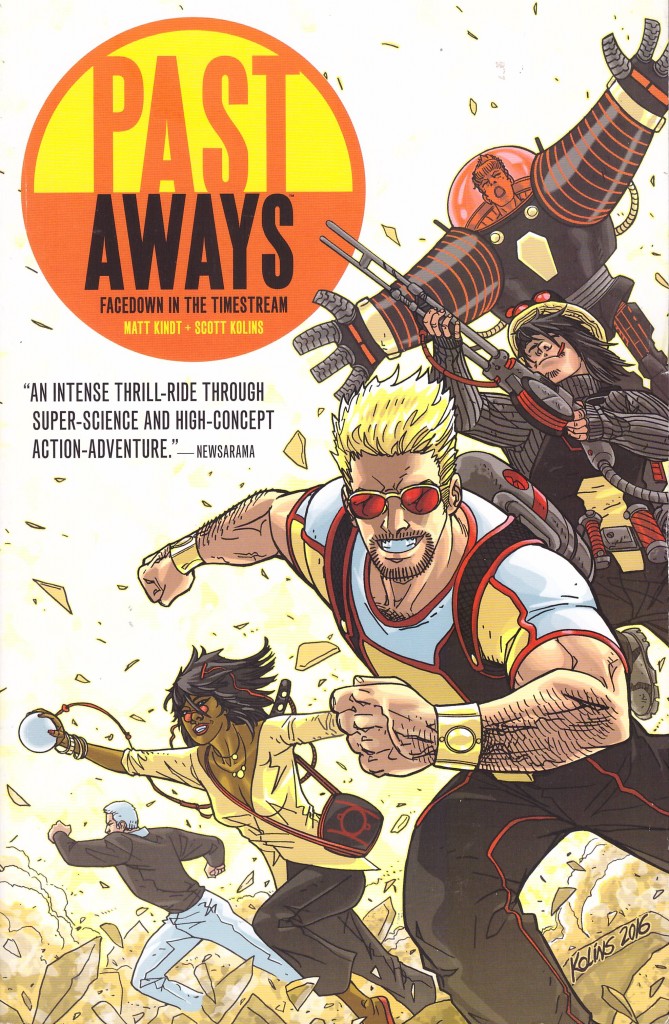 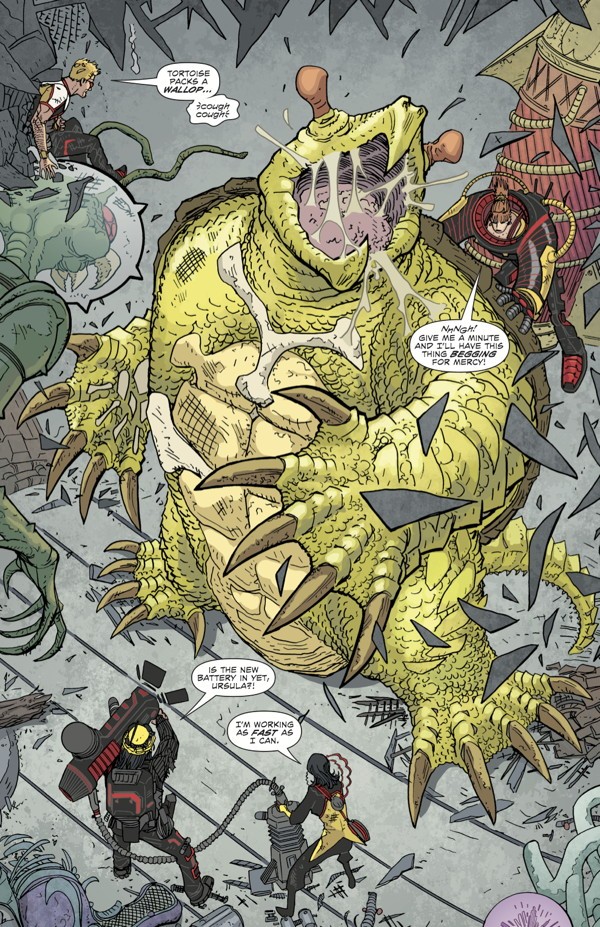 What happens when five time travellers from the far future arrive in 2015? Well, there will be rifts in space/time for starters, resulting in the emergence of further anomalies.

In common with other features he’s written, Matt Kindt has spent much time considering the logical underpinning of Past Aways, frequently resulting in great ideas supplied as throwaways. One such would be predatory nanite sized robot fish to protect the waters from intruders. He’s rationalised that a small team sent back in time for a specific task would require a selection of complementary character traits and skills to service the mission. Equally, when trapped in the past and in each other’s company for a prolonged period, those conflicting personalities would fall out. The team members’ confidence they can’t die in the past due to the time stream adjusting for them at first contrives as a little more wooly, but is addressed as the story continues. Also good is the manner of noting elements of future technology by framing devices on the art and adding explanatory footnotes, sometimes used for comic effect highlighting the inadequacies of present day limitations. The latter is an interesting take on every successive generation’s idea of sitting at a technological peak, and humorously expanded in text pieces separating the chapters.

With their future technology in effect supplying super powers, and their protective clothing being uniform, notionally little separates the Past Aways from the X-Men, but ‘superheroes’ isn’t a term ever applied, and artist Scott Kolins deliberately distances the team from that idea. This is partially by technological design. He’s been as effective as Kindt in creating an imaginative visual environment for Past Aways, and as well as being consistent through the book, this is presented in pin-ups. They travel via enlarged drone with a central pod, and fight skyscraper size robot constructions, but unlike anything seen in comics.

Team leader Art is the only time strandee diligently maintaining protocol, establishing a secret base and as discreetly as possible accumulating any further chronal anomalies within. These again permit Kindt and Kolins’ imaginations to flourish, and feed into a general feeling of fast-paced fun, but there’s a sinister underscore as readers are aware of a progressive danger. As the book continues more secrets come to light, an early one being that there is a way back to the future, but is the cost of it too great an ethical compromise?

The work of Jack Kirby is a huge influence on both writer and artist, so everything leads to a jet-propelled all-action finale. It’s as satisfying as the remainder. Past Aways works as loving homage, and clever pastiche, but primarily as thrilling adventure. Make time for it.