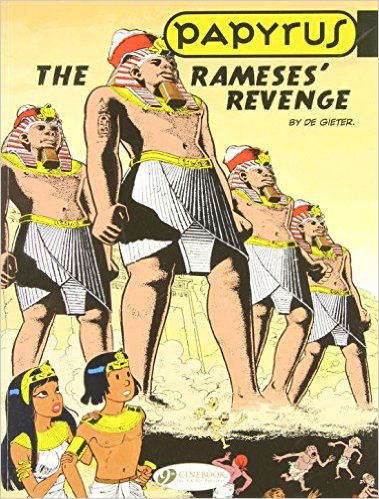 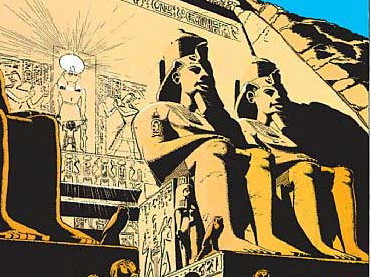 Created by Belgian cartoonist Lucien de Gieter, Papyrus debuted in the legendary anthology Spirou in 1974, subsequently spawning more than 30 collected albums, tracing the lightly fantastic adventures of a simple child fisherman favoured by the gods who became the hero of Egypt and a friend to Pharaohs.

The stories of Papyrus encompass a vast range of themes and milieus, blending Boys-Own wholesome adventure with historical fiction and living mythology, gradually evolving from a traditionally welcoming, inclusive “Bigfoot” cartooned feature into a more realistic, dramatic and authentic iteration.

That’s not a concern in this first Cinebook translation as The Rameses’ Revenge (actually the seventh European album, released in 1984 as La Vengeance des Ramsès) finds the boy hero en route to the newly finished temple at Abu-Simbel on a royal barge. He’s part of a huge flotilla dedicated to commemorating the magnificent new tomb of Rameses II.

The worthy peasant had been given a magic sword by the daughter of crocodile-headed god Sobek to free Horus from imprisonment in the black pyramid of Ombos and restore peace to the Two Kingdoms – but that’s a tale for another tome. The lad was also charged with being lifelong protector of wilful Pharaoh’s daughter Theti-Cheri. His sedate Nile journey is plagued with frightful dreams. which a cleric declares a warning.

If this tale is representative, the series will thrill and delight lovers of fantastic fantasy and bombastic adventure. Papyrus is an excellent addition to the all-ages pantheon of continental champions who combine action and mirth with wit and charm. Anybody who has worn out their Tintin and Asterix collections would be well rewarded by checking out these epic tales.