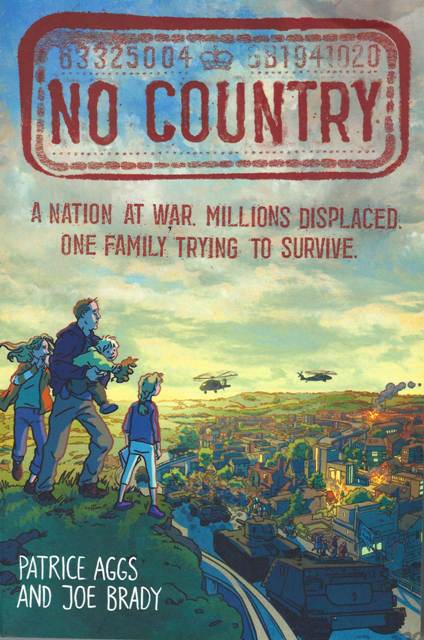 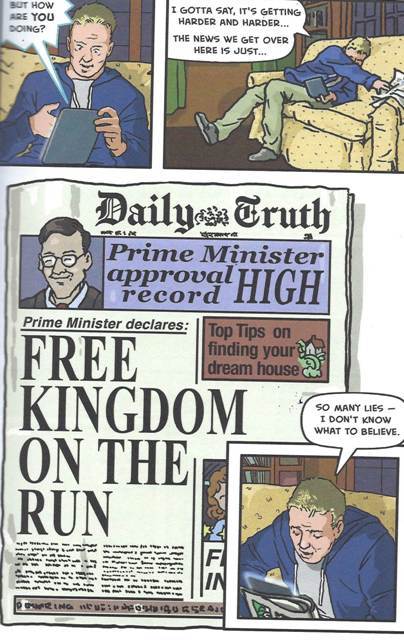 It’s no secret that the plight of refugees and asylum seekers is intentionally diminished by the press and politicians alike. Unless you have experienced the desperation for a better life caused by poverty, violence and oppressive governments, desperation enough to make a dangerous journey, it is simple enough to reduce people to the term “migrant”. No Country, by writer Joe Brady and artist Patrice Aggs, is an affecting all-ages drama that asks the reader: What if your country experienced a civil war? What if you had to run for your life?

Beatrice is a young girl who loves drawing comics and lives with her big sister Hannah, their little brother Dom and their father Pip. Tensions simmer between a government led by a Prime Minister who refuses to step down when he loses an election and a group called the Free Kingdom. Unemployment, food shortages and rolling power cuts are the norm. Even scarier is that people are disappearing. Are they fleeing to another country or is the reason more insidious?  Bea’s mum Jenny has gone to another country to prepare a new life for them but things are getting worse very quickly.

No Country is a bleak tale, the reasons for the chaos easily identifiable with real world parallels. The correlations with recent political developments make it all the more unsettling. Things are bad, with Brady drip feeding information. You never get a sense of what really went wrong and who is worse, the government or the resistance. In some ways the antagonists feel typecast, the army officer almost vaudevillian and there’s also a lack of clarity when it comes to the Free Kingdom. Are they freedom fighters or working class fascists? It poses perplexing questions but can be overlooked because it is not main focus of the story. It is also meant to be confusing, seen from a child’s standpoint. What can be scarier for a child than losing their family?

The emphasis is on the familial interactions, on Bea coming to terms with the fact that life isn’t fair. It is equal parts tense and heart-warming with Aggs’ phenomenal artwork driving the story. Pip’s attempts to lift his children’ spirits are lovely and the growing relationship between Bea and Hannah is believable. On the other hand, she cultivates the growing foreboding as tanks roll into town and riots break out over food shortages. As the situation worsens you are enveloped in the unfolding drama. There’s a scary reality to it without ever losing the sense that this is about children and for children.

No Country is a beautiful, sad and at times an uncomfortable read that lingers long after you have read it. It doesn’t pull punches, but neither does it lose touch with human kindness. May it be the only experience of war and fascism our children ever have.