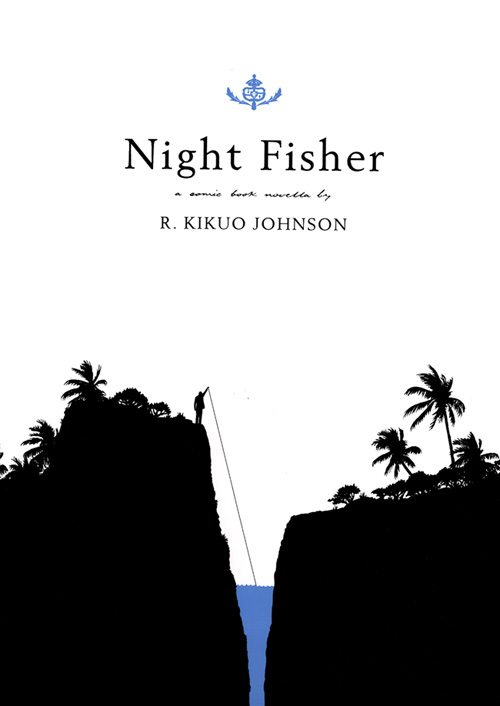 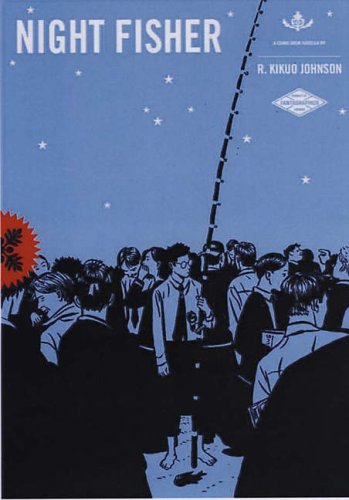 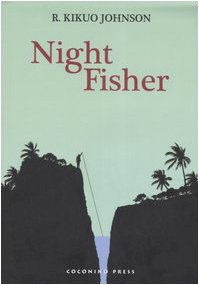 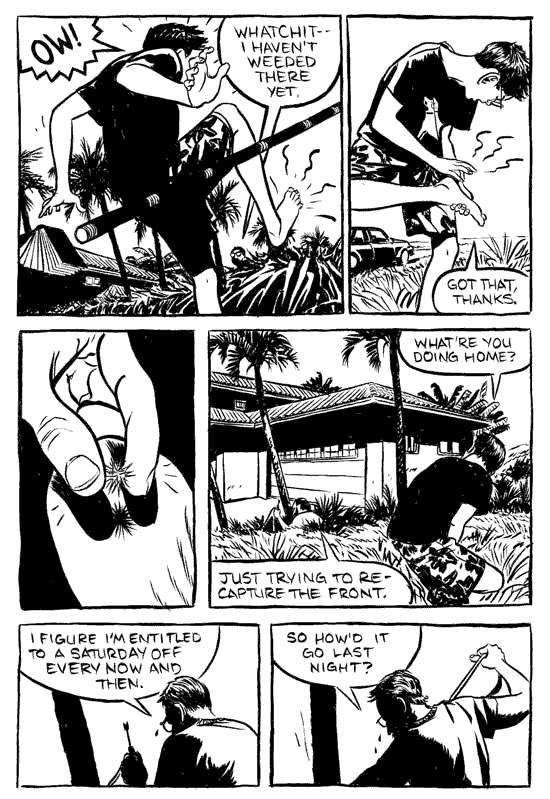 It’s a slow-paced coming of age story, firmly within literary fiction and alt-comic conventions. It slots comfortably into Fantagraphics’ list, though drawing unwelcome comparisons with their hits Locas, and Ghost World, which dealt with similar themes twenty and ten years earlier. Loren, the protagonist here – finishing high school, academic, yet resistant to leaving for an elite college – clearly parallels Enid from Ghost World. The later scenes where he goes over to the poor side of town, could be a routine night in Jaime Hernandez’ Hoppers barrio. Johnson, though, has his own twist on the setting and class/race dynamics, as his protagonist is an affluent, mainland American relocated to Hawaii.

The island of Maui, as seen here, is not a holiday paradise, but simply the home of indigenous Hawaiians struggling to get by. Loren’s new friends think nothing of taking on the law for a few bucks: anyone looking for some partially used tyres? There are some fascinating glimpses into Hawaii’s position as the newest American state. For example, we find out the dissolute Jon is a rare example of migration back from the American mainland, and also has historic deeds to a significant plot of land – now as worthless as Confederate dollars.

This could be Johnson’s own experiences as the story and characters ring true. The main relationship in the book, the breakdown of which triggers the story, is between Loren and indigenous Hawaiian Shane. Loren’s the point of view character, and we see the pressures on him: disappointment from his father when he drops to a “B’ in one subject. We lack the same insight into Shane’s circumstances, only knowing his parents have managed to send him to the same ‘rich kids school’ as Loren. The central drama of how they will cope with the competing demands upon them, is weakened as we don’t see what the demands and stakes are for Shane.

Johnson’s art is impressive: both realistic and stylish, rendered in fluid brushstrokes with plenty of blacks, and the settings – natural, suburban, industrial – well realised. An obvious touchstone is David Mazzucchelli‘s more naturalistic work, and there’s evidently been some connection. as he’s mentioned in the acknowledgements.

The cover is immediately striking: it captures the fishing of the title, the distinctive volcanic landscape of Maui, and in turn, geology, which Loren is studying. Night fishing, in the literal sense, only takes place in what appear to be a couple of dream sequences. It’s perhaps a metaphor for the night scenes that drive the story, when he’s figuratively dangling a hook to see what bites. There’s a sense at times, though, that Johnson the artist makes promises Johnson the writer can’t keep. For example, the book opens with a beautiful and dynamic page of an explosion startling Loren at his fishing, yet it doesn’t prove significant in the story, as an actual explosion or existential threat.

Still, for a very good illustrator, he is a pretty good writer. It’s a solid debut that promised great things to come. He’d impress in Fantagraphics’ Mome anthology, particularly with his fictitious comic covers, that implied fascinating narratives, like ‘First Teen Fancy’, in which a female US soldiers falls for a dashing Arab man: “I occupied his country — he occupied my heart”.

Johnson’s only other book release is a Raw Junior children’s book: it’s beautiful and the similarity to Mazzucchelli more obvious. Hopefully, as with Mazzucchelli himself, we’ll eventually see the full flowering of his obvious talent.