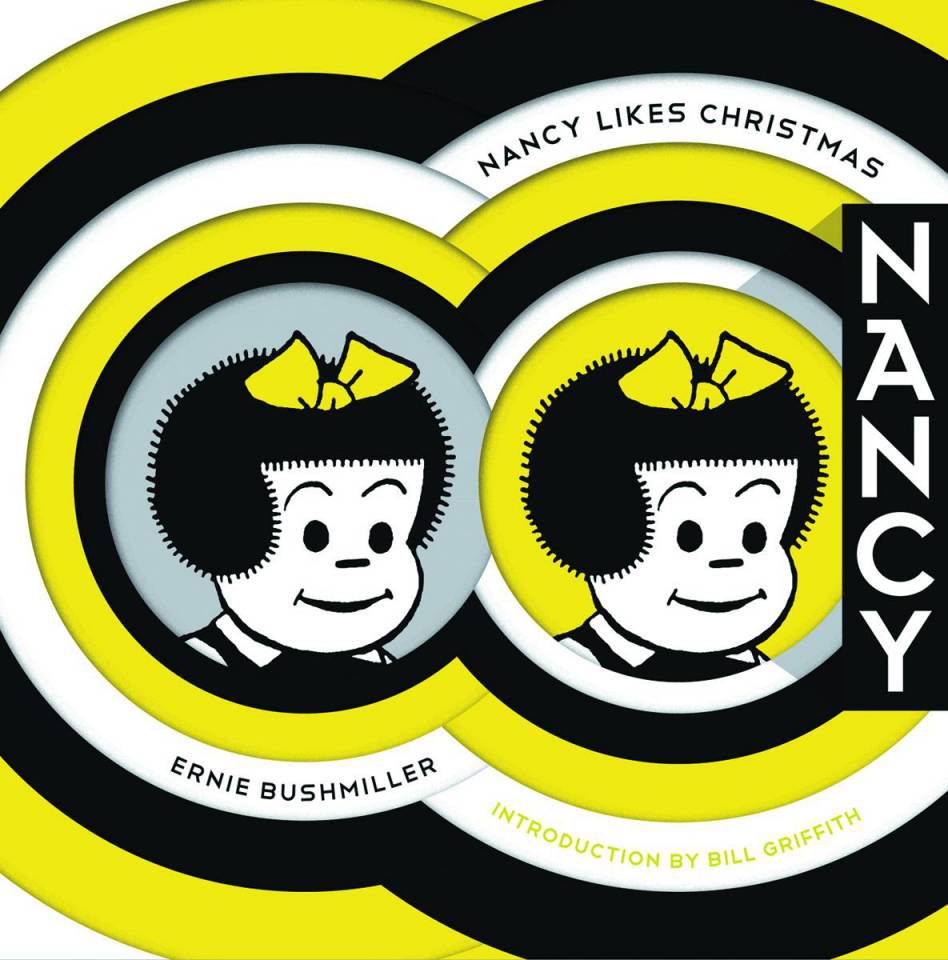 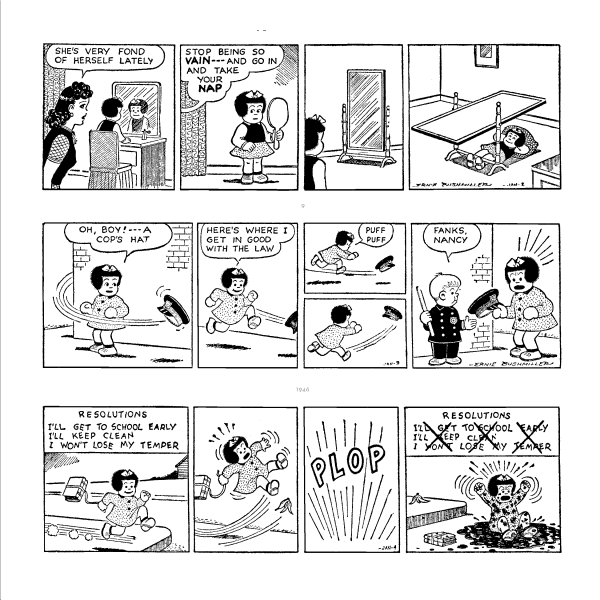 Just what is it that makes Nancy so different, so appealing to cartoonists and hardcore comics theorists as much as to those just looking for a funny gag? Nancy Likes Christmas, the second volume in Fantagraphics’ reprinting of the classic newspaper strip series has the answers, in this 336-page collection of three years of daily strips. It’s so easy to select random Nancy comics that dazzle with their algebraic puzzle structures and wordplay that we tend to see it as a disconnected tide of surreal gags and look no closer. But given the chance to see how Ernie Bushmiller builds and plays around with an idea over several days, exploring permutations and wringing every possible twist he can from a premise, what we discover is much more impressive. In these pages the world that we only see glimpses of in those scattershot excerpts is a fully-realised alternate reality, and the near-abstract figures of Nancy and Sluggo are sometimes our human representatives battling with the dream logic of their cartoon world and at other times the most bizarre elements of the strip themselves.

Bill Griffith, creator of Zippy the Pinhead, introduces this volume with some analysis of Ernie Bushmiller’s singular genius for manipulating structure and symbolism: “Try to imagine Nancy as an animated TV show or a live action movie. You can’t. This strip is so powerfully put together as a one-row comic strip, it can’t be anything else. It defies alteration of any kind– it’s that solidly built.” That’s really the key to understanding what this strip is: it’s an exploration of the nature of the drawing process itself, of how you can translate reality into concepts, concepts into symbols and then deliberately mix up the results to create tension and then dispel it. The only thing that matters is what you can produce on the page. Everything is ink and infinitely fluid. Bushmiller often described his process for creating a strip by beginning with the final panel—the punchline of the gag—and working backwards, sculpting the logic of the sequence so that he could start in the most unlikely place but yet tailor every element of the completed strip to the joke. Once you know this, examining these strips panel by panel in reverse yields almost as much entertainment as reading them forwards. No wonder Nancy is such a rich source of inquiry for comics theorists.

Still, if this strip wasn’t as funny as it is, all the theories in the world wouldn’t count for much. By ignoring the usual narrative demands of character development and story arcs to simply deliver one joke after another, Bushmiller manages to create an ideaspace that is purely, timelessly, magnificently silly. So much so that Nancy Likes Christmas is surprisingly hard to put down. The jokes flow so freely that you keep flipping the pages for just one more, okay just two more, and find yourself fifty pages and twenty minutes later in an altered state of mind. Who needs drugs when you can get high on comics without even trying? This book is out of print, but relatively easy to find online, and if you like this then there is a third volume, Nancy Loves Sluggo that’s also worth tracking down.