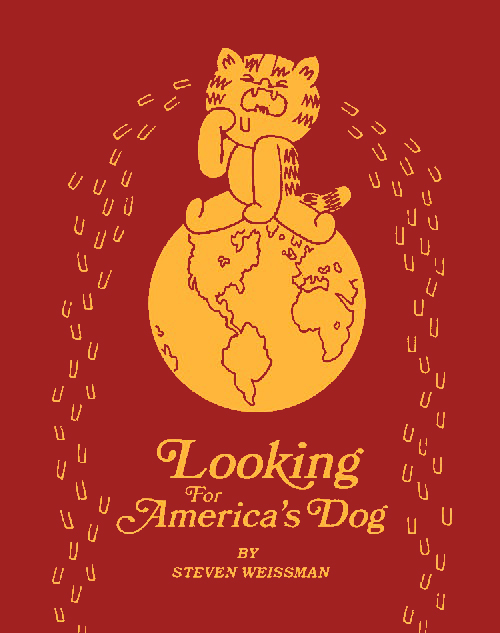 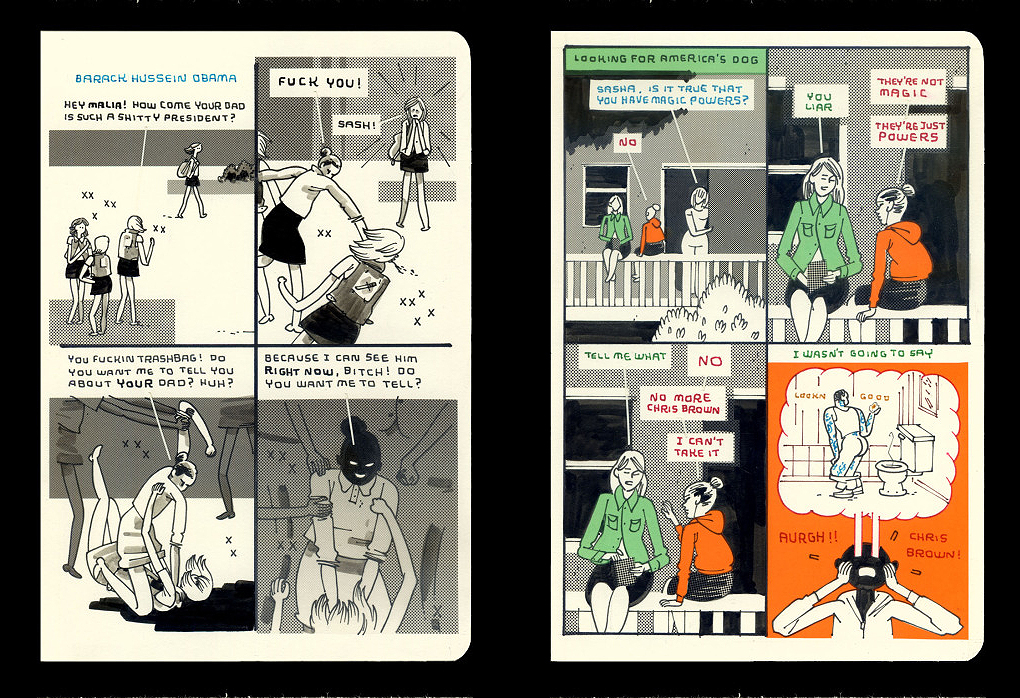 Looking For America’s Dog continues the series of comics that Steven Weissman began in 2009, an absurdist political satire called Barack Hussein Obama. That featured the president of the USA, his wife Michelle, his two daughters Sasha and Malia, and others in the White House including vice president Joe Biden and secretary of state Hilary Clinton, in a kind of existentialist sit-com. None of the characters are depicted accurately in any recognisable way, but are almost always generic-looking and vaguely anonymous, at least until they transform into various monstrous or distorted forms. Weissman’s very deliberate choice not to use likenesses gives his strip the detached feeling of those dreams where people you know and love inhabit completely different bodies and yet remain the same as they always are, and the disparity doesn’t bother you at all until you wake up.

There are several strands of commentary running through this collection, held together by the plot which features Sasha and Malia trying to find the family dog, Bo, who has run away after Joe Biden left the gate open. Sasha has ESP powers and her mutant abilities enable her to see where Bo is as he wanders increasingly further away from the USA and eventually winds up in North Korea, adopted by Kim Jong Il. It’s probably no coincidence that ‘remote viewing’ by psychics was a surveillance technique that both Russia and the USA investigated in the 1970s.

Looking For America’s Dog has a unique appearance, presented as scans direct from Weissman’s sketchbook. He draws in an elegantly reduced, abstracted style which emphasises shapes, aided by swathes of Zip-A-Tone (an antiquated way that illustrators added half-tone gradations to their artwork with sheets of pre-printed dots in the 1950s/70s). The physicality of his different styles of hand lettering, coloured markers, bits of tape and visible scalpel marks emphasise the human hand that creates the art, making these comics feel almost like stolen documents. It’s a particularly apt style for observing people whose daily lives are so mysterious and yet so public at the same time, with everyone very curious about what goes on behind their official faces. Most of what Weissman imagines about these lives is sadly banal, weird or ridiculous, but a kernel of real emotion underneath it all makes the jokes resonate, as in a typical strip where Michelle Obama answers questions: “Mrs Obama, you radiate such confidence and style. Won’t you share your secrets?” someone asks. “Here’s something”, Michelle Obama replies, as she opens a golden envelope at an awards ceremony, “If anybody tells you they don’t like what you’re doing, keep doing it. DO IT ALL THE FUCKING TIME”.

This book is a strange confection of craft, beauty, anger, silliness and despair with multiple layers of meaning that you can peel away or just leave alone. Some of it is profound, most of it is goofy but that goofiness gives way to bleakness, as pieces of sharp political observation pierce the absurdity with chilling reminders of what underpins all the metajoking. At times it echoes the sarcastic tone of David Rees’ Get Your War On. You need to be familiar with USA pop culture and news media to get all the references, but there should be enough context to give you the gist. If not, there’s still enough going on to make Looking For America’s Dog a satisfying design experiment with a core of steely intelligence. Further Weissman experiments can be found in the compilation Butter and Blood.