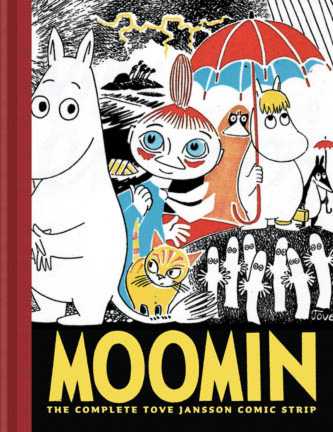 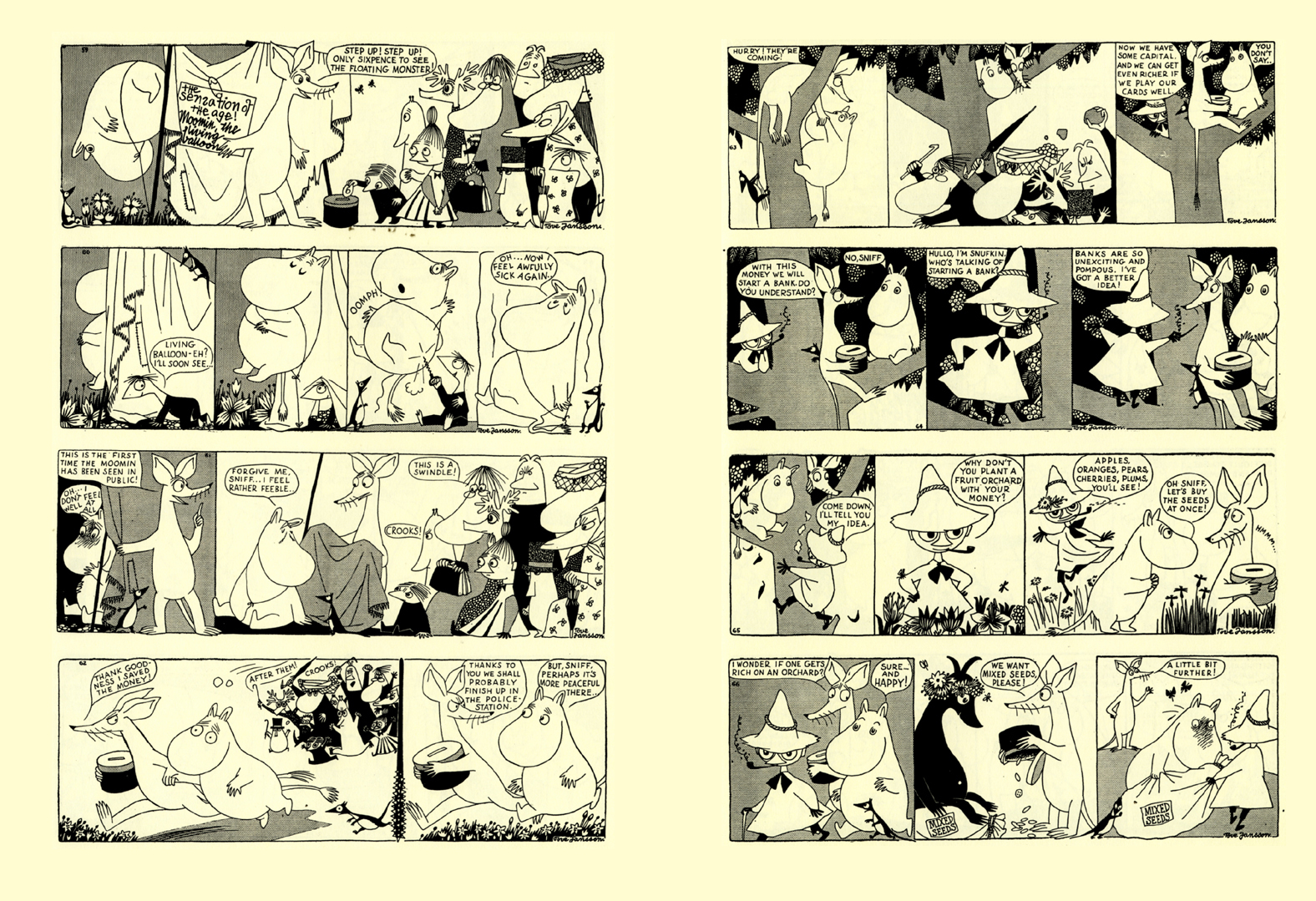 Tove Jansson’s Moomintroll novels and picture books made her one of the most beloved Scandinavian authors of the twentieth century, famous around the world. Along with the books came all kinds of merchandising plus stage adaptations, animated TV shows and films, but Jansson also created a daily newspaper comic strip that was completely forgotten until it began to be reprinted in 2006. Moomin was first published in the London Evening News on 20 September 1954, one strip every day except Sundays. It was written and drawn by Tove, translated by her brother Lars and so actually appeared first in English before being sold to Finnish and Swedish papers a year later. The series ran until 1975, syndicated in newspapers around the world. It appeared in the Toronto Daily Star in Canada, but it never reached the USA.

Moomin: The Complete Tove Jansson Comic Strip – Book One is the first of a series of volumes reprinting every Moomin comic strip written and drawn by Tove Jansson and later, by brother Lars. The stories begin with Moomin and the Brigands (1954), which introduces Moomintroll, who lives in a house by himself, without parents. He meets Sniff, who is braver and perkier than usual. The Hattifatteners, tiny enigmatic electrical creatures, demand Moomintroll serve them cocktails. Snuffkin and the Snork Maiden also appear but it’s not until the second story, Moomin and Family Life (1955) that Moominmamma and Moominpappa are reunited with their long-lost son. In the third story, Moomin on the Riviera (1955) Moominpappa and the Snork Maiden’s need for excitement takes the family away to the Riviera where they drink champagne, gamble in a casino, and are mistaken for eccentric millionaires by the proprietors of the very expensive hotel that they thought was a remarkably accommodating (and free) stately home.

Tove Jansson was not trying to recreate her novels as comics. She reintroduces her characters for the daily newspaper-reading audience with no narration–which is where most of the slightly ironic, melancholy and wistful tone of her books resides–and lets the playful, anarchic and unconformist impulses of the Moomins propel them along in constant forward motion. It’s a decision based on making the most of the visual possibilities that a strip presents, and she adapts her already formidable picture-making skills so well to the demands of the form that right from the beginning, the Moomin comics look remarkably appealing and read beautifully. Jansson’s cartooning is fluid and intelligent. Each strip is a great blend of graphically sophisticated layouts, gorgeously individual character design and beautiful lettering, so from the first panel, they’re the work of a total master.

Fans of her books will find this alternate Moomin universe disconcerting at first, but Jansson knows what she’s doing. Keep reading to see how she has used all the elements of her prose work, but tweaked them and transformed them into visual metaphors so that they work in this new context. Moomin’s Desert Island (1955), the last story in this volume, features the ‘Protomoomins’, 1000-year-old Moomin mummies who come to life. They look like her original drawings of Moomintroll and his mother from the very first story The Moomins and the Great Flood. And while you’re musing on that, there are lots more funny, odd and poetic elements to enjoy in this mixture of surreally silly plots with the unpredictable but always logical (in their own way) Moomins.

The stories in this volume also appear in the large Moomin: The Deluxe Anniversary Edition which contains all 21 stories by Tove Jansson plus never-before-reprinted drawings and character designs. From 2012 Drawn and Quarterly issued smaller landscape paperbacks of individual stories, beginning with Moomin and the Brigands. 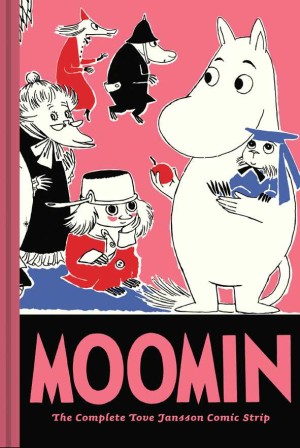