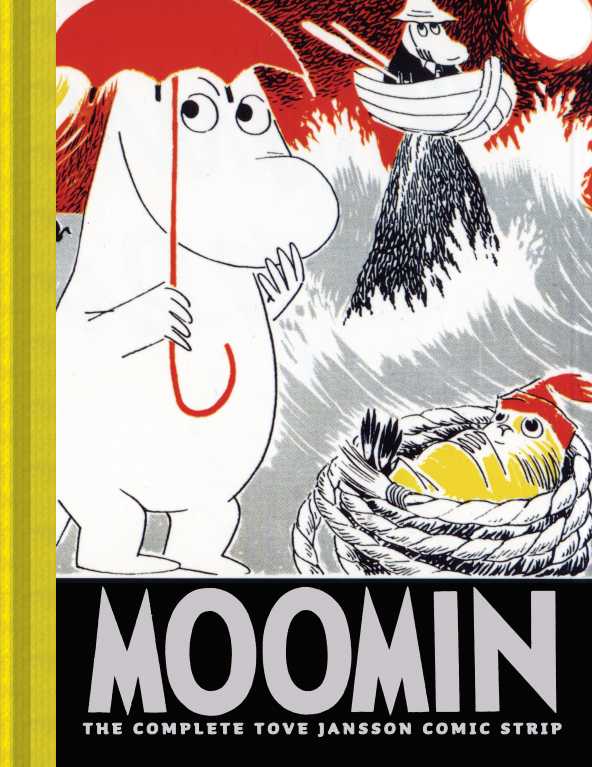 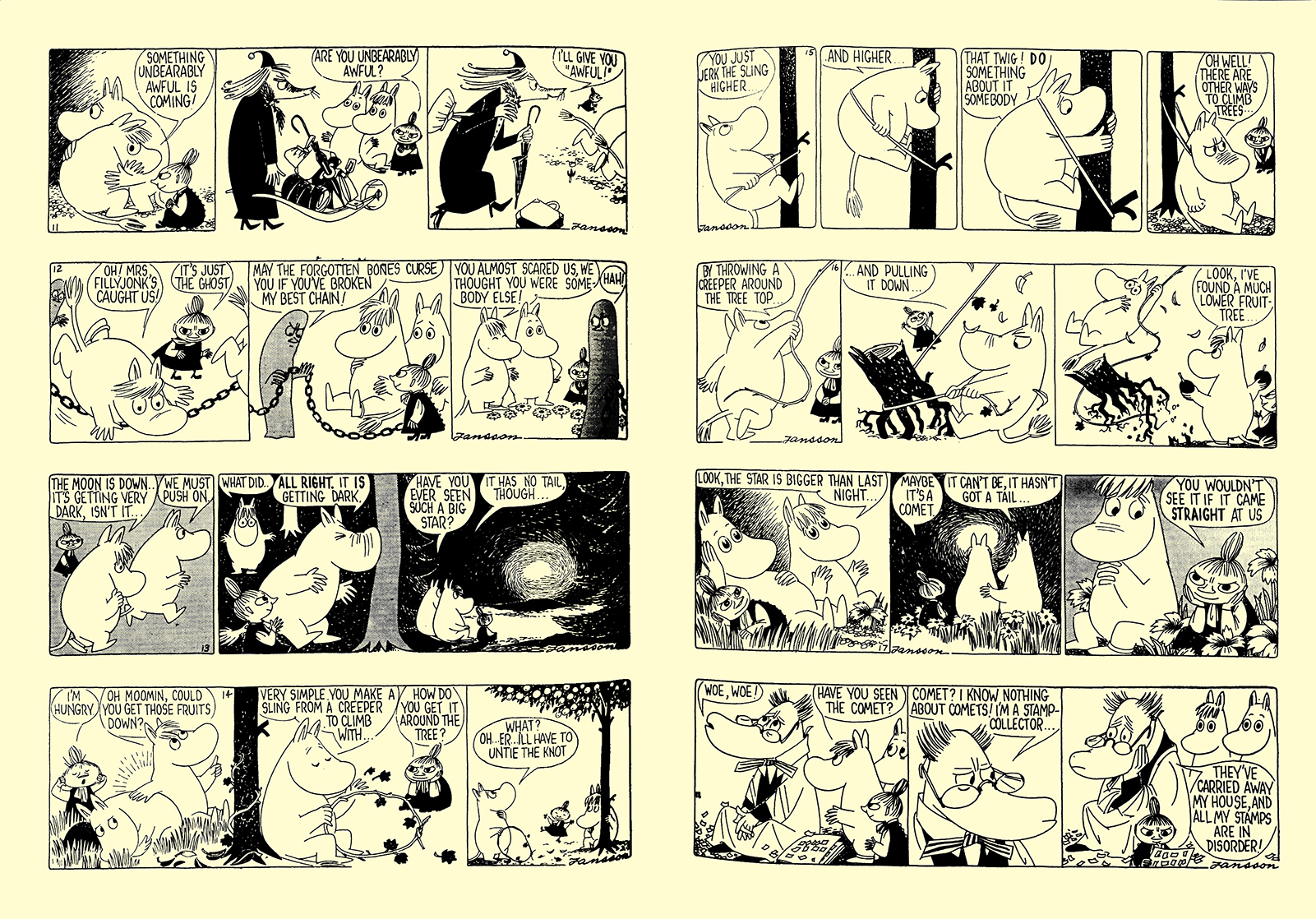 Tove Jansson was a painter, a poet, a novelist, an illustrator and for a while, a cartoonist. She occupied all those roles with greater facility than most people manage with just one of them. By 1957 after four years of writing and drawing the Moomin newspaper strip six days a week she was beginning to resent the time it took up, leaving her almost no freedom to do anything else. Her brother Lars began to ease her workload by writing scripts for her to draw, and four of the five stories here are written by Lars and drawn by Tove.

Lars’ scripts begin with Moomin in the Wild West (1957). Moominpappa accidentally combines a clock and a sewing machine into a time machine and after figuring out what he’s done, the family decide to visit the time of the Wild West to see some cowboys and indians. In the second story Snorkmaiden Goes Rococo (1957) the time machine gets a second outing as Snorkmaiden decides she wants to visit eighteenth century France. Compared with Tove’s own scripting which combined funny dialogue with three or four subplots plus lots of action, these two stories feel underwritten and aimless. There’s plenty of activity but it doesn’t add up to much, and there’s barely a line of conversation that rises above moving the stories along.

The Conscientous Moomin (1958) sees Snufkin and Little My re-enter the scene, and a dour black-clad official from the League of Conscience and Duty visits Moomin valley to instil an sense of responsibility in everyone. “Have any great men been born here?” he asks. “No. Only small children.” answers Little My. A chastened Moominpappa starts getting up early to plan for the future, Snorkmaiden gets a job in an office, Little My and Moominmamma make industrial quantities of Jam. It’s basically a less polished version of Moomin Begins a New Life from Book Two.

The fourth story Moomin and the Comet (1958) is an adaptation of Tove’s book Comet in Moominland, condensed into a much simpler narrative. A mysterious cloud appears in the sky one day, the Hattifatteners abandon the valley and Mrs. Fillyjonk, the Nibling, and Mymble follow them. When the Moomins realize the cloud is a comet headed straight for Moomin valley, they depart their home too in hopes of escaping doom. It’s attractively told, but it’s only the final story Moomin’s Golden Tail (1958), written and drawn by Tove, that has the sparkle missing from the rest of this volume. The tuft on the end of Moomin’s tail falls out and when it grows back it’s made of solid gold. As his fame spreads far beyond Moomin valley, fan letters arrive, autograph seekers besiege him and he acquires a manager to handle his image and publicity. Despite resenting a lot of the problems fame brings him, Moomin can’t bring himself to give it up.

Moomin Book Four is not as inventive as previous volumes and Tove Jansson’s art is less decorative, but it all remains charming and entertaining. Readers should note that a production error means two strips are missing from the end of Snorkmaiden Goes Rococo. This volume ships with the missing panels on stickers to be placed in the correct spot, so make sure your copy has them.

All five of the stories here are also reprinted in Moomin: The Deluxe Anniversary Edition, a large, slipcased book which contains all 21 stories by Tove Jansson plus never-before-reprinted drawings and character designs.