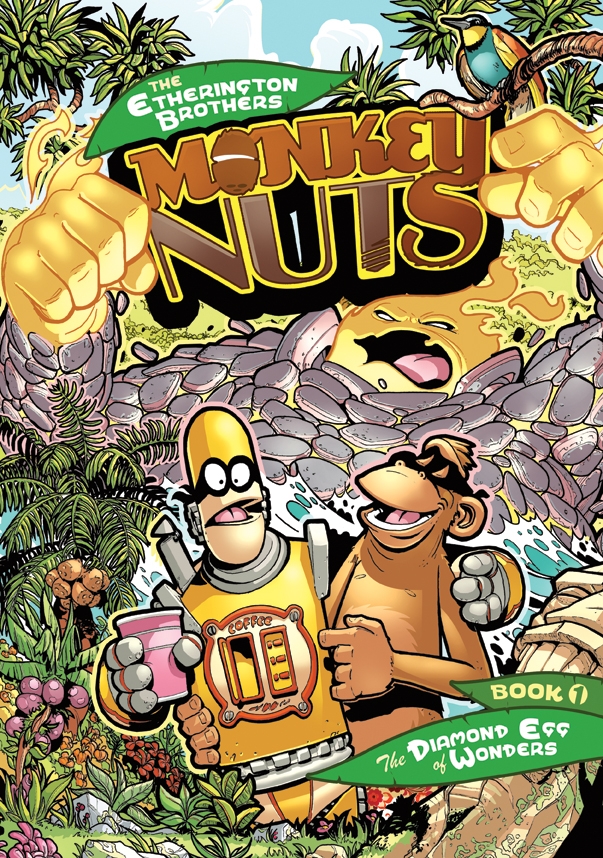 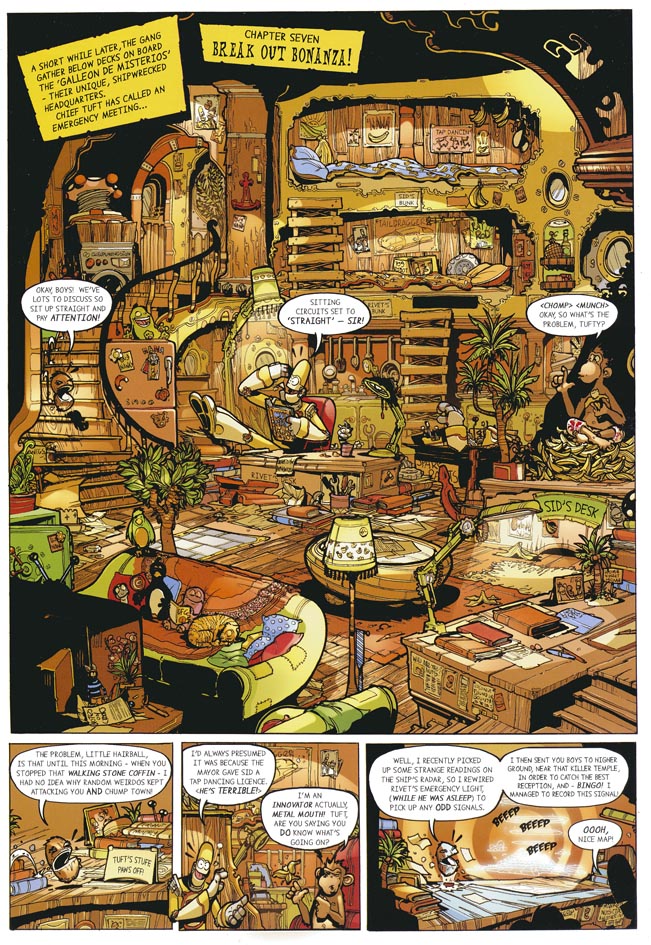 Deep in the heart of the Bermuda Triangle, lies the mysterious Isla de Monstera. In his stone fortress (affectionately named Tabitha), the evil Lord Terra (Eric to his friends) plots to find the Diamond Egg of Wonders. He receives a vision of the heroes who will stop him, and arms the Monster Magnet to attract villains and monsters to rampage through the island, so that he can claim the Egg while these heroes are kept busy. The fates obviously hate him and have a wild sense of humour, because they bring together Sid (a former performing monkey), and Rivet (a drinks dispensing robot) under the guidance of Chief Tuft (a talking coconut) to become the crime-busting Monkey Nuts, the wacky heroes destined to protect Chump Town, solve the mystery of the rampaging monsters, and stop Lord Terra from finding the Diamond Egg of Wonders.

Aimed at children between the ages of six and twelve years old, Monkey Nuts is a lovely blend of vibrant colour, zany stories, and wonderfully inventive characters. Originally written for weekly comic The DFC, it is the brain-child of the Etherington Brothers. Robin is the writer, and Lawrence (aka Lorenzo) the illustrator. Sid is bold, reckless and has a mouth as quick as his mind. Rivet is well-meaning and able to build just about anything, while Chief Tuft is the main nut with big vision and nose (sort of) for opportunity.

Lorenzo is a fantastic cartoonist with an incredible eye for detail and colour. Everything about his work is wonderfully imaginative, from the structures the characters inhabit or use to get around with, to the characters themselves. The background is highly detailed, with cleanly drawn uncomplicated characters that hold your attention in the foreground. Robin cast is zany (a talking cocunut?), but works largely because Lorenzo is in sync with his brother’s ideas. There are dozens of monsters here, the unique individuality of each a wonder to behold. The downside of all the detail is that panels can feel crammed, the art hardly contained in the smaller ones. On the other hand, the larger half-page and full-page frames are brilliant, really showcasing Lorenzo’s skill.

Robin’s dialogue is aimed at his primary audience, with references to bums, poop, and full of silly insults and slapstick gags. It’s what boys in particular love, so only pick this up if you like something that is part old style Beano comics, part Asterix, and part Monty Python sketch (without the really rude bits), or test it out on a son or nephew. It’s puerile humour, but there are genuine chuckles to be had whatever your age. There is no real character development, just oodles of fun when two ordinary guys down on their luck put masks on, suddenly more than their societal type-casting and given a purpose: busting crime!

This is what kids comics should be about. Fun, crazy, and lots of laughs. Life is hard enough without trying to make everything they read “realistic”, so The Diamond Egg of Wonders is perfect for an evening of escapism chuckling over a story that is among British comics at it’s best.