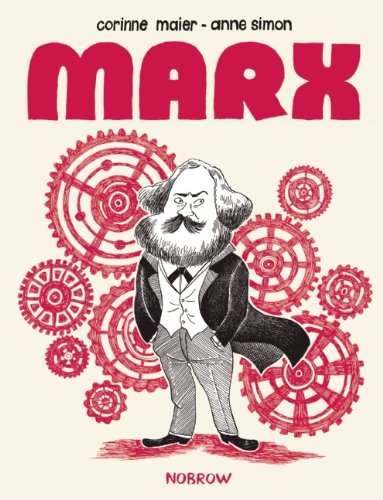 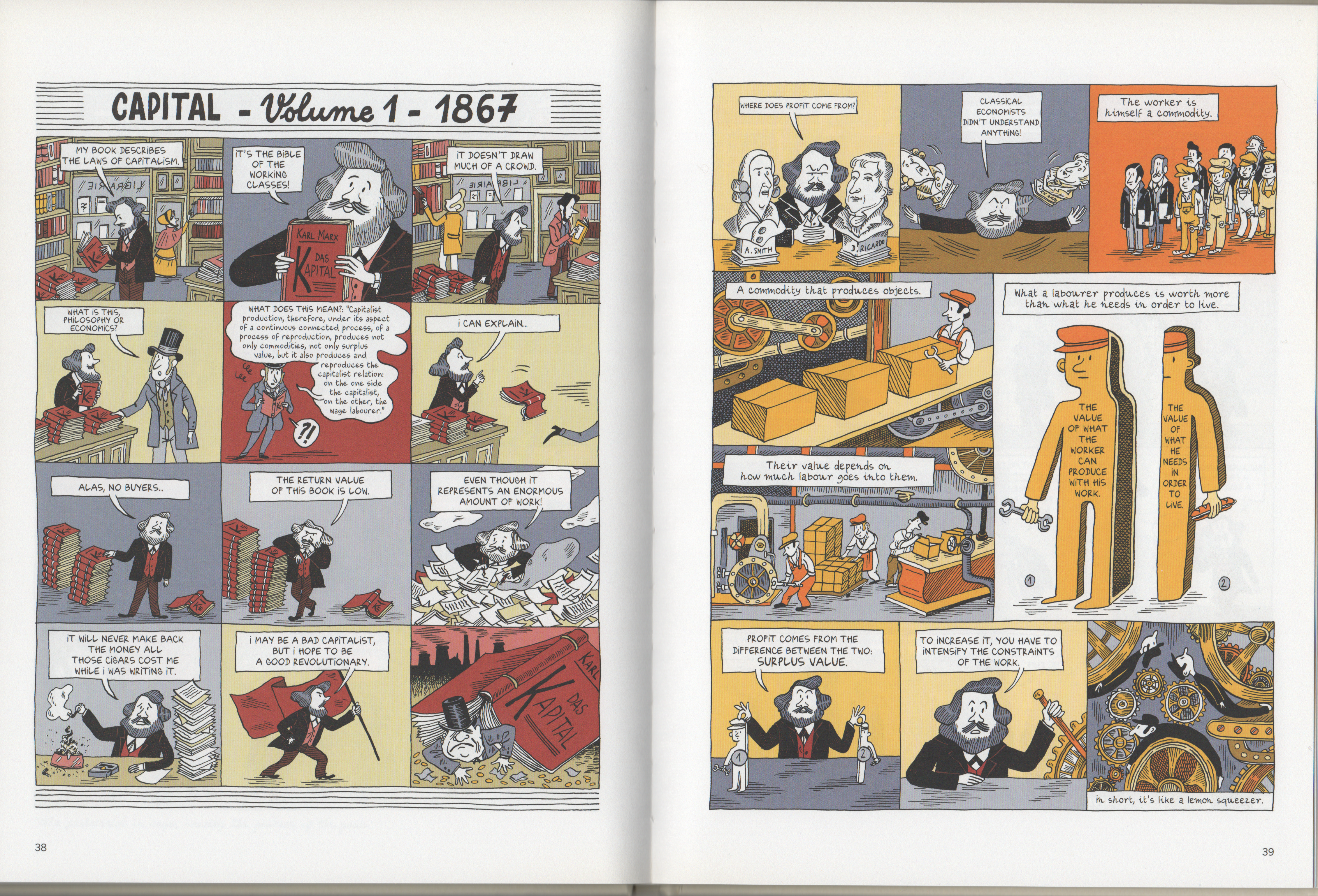 Marx is in the classic French album format of sixty-odd A4 pages. That’s not a lot of space to capture a busy life and powerfully influential ideas. However Corinne Maier and Anne Simon, have thoroughly proven themselves with Freud in the same format.

Karl Marx, his caped avatar on the first page tells us, “…was once nicknamed The Devil, because he tried to put capitalism to the sword!” He quickly puts to the same sword the idea that this is a book only about the past, declaring that nothing has changed and “there’s only one solution: revolution!”

Having now seized the attention of sympathisers and antagonists alike, French creators Maier and Simon get straight in to the distilled facts of his life, and a calm account of his ideas. They are masters of economy – only needing a few pages to tell us of his birth to a Jewish family in Germany, and his school and student years. Even here, they’re establishing his strong-willed personality, and introducing the key ideas that will shape his life and work. He wonders if he’ll go on to be a dreamer or a fighter, then we see him do both – the fighter in the political rather than military, sense.

Biographies are better for showing the flaws of the subject, and there’s a touch of that. Readers may be surprised to see the the champion of the working people living in a fancy house that Marx himself would have termed ‘bourgeois’. When working people didn’t have the means or opportunity to articulate their concerns, maybe it needed the middle class to say it. There’s also the situation with his maid… He’s her employer and landlord, so if he’s also the father of her child, that’s – at the very least – an uncomfortable power relationship at play. The authors present this all without comment, never informing the reader what to think.

Simon draws all this in a loose, cartoon style – with each character recognisable and expressive. She’s adept at innovative layouts, symbolic scenes and montage. Look at the page [pictured] explaining how the worker produces objects, which in turn create ‘surplus value’ for the owners. Elsewhere the images themselves add less value – the arm with clenched fist rising out of the map of Europe is hardly original.

Perhaps Freud, with his exploration of dreams and the subconscious was simply a more visually fertile subject. His case studies also translated the theories into compelling human stories they could include in their book. In comparison Marx remains more dryly theoretical.

Comparisons aside, this slim volume still effectively tells us about the man and his ideas. Marx sadly died with key projects  – including his magnum opus Capital – left for others to finish. Maier and Simon, though, bring back his ghostly avatar (actually drawn as a superhero) to comment on developments after his death. He looks at the hopes and failures of different countries’ attempts put his ideas into action, and the state of the world after the 2008 financial collapse. We leave him, cape billowing in the wind, fencing an oligarch, telling us “The struggle continues”.

As people around the world look for alternatives to austerity, Karl Marx’ ideas remain powerfully relevant, and this could be the best introduction. It’s an efficient product of skilled, and hopefully well-rewarded workers.

Maier and Simon followed this with 2016’s Einstein.