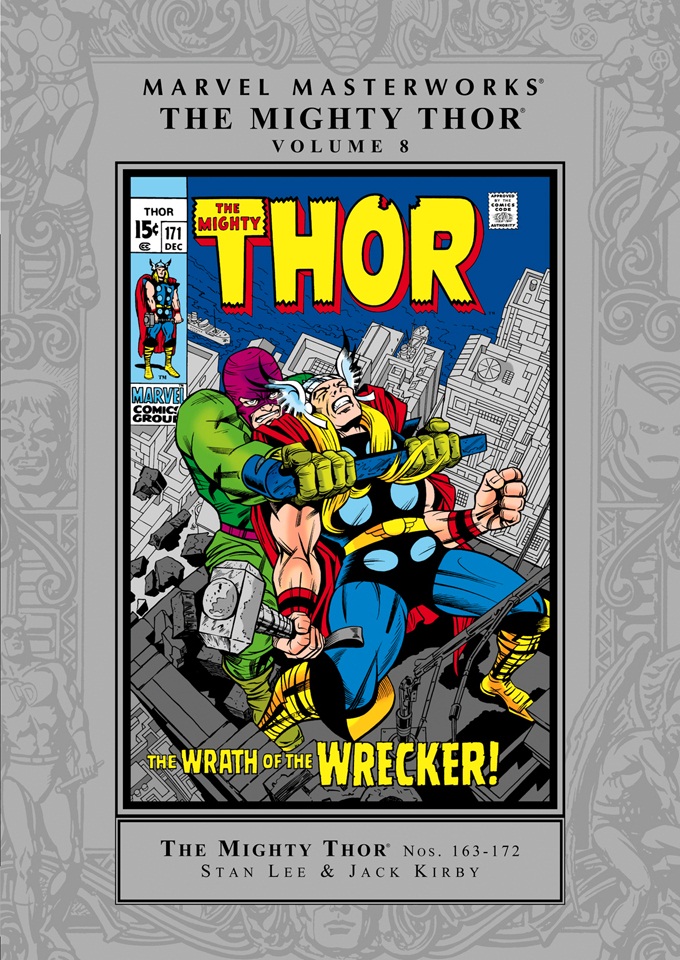 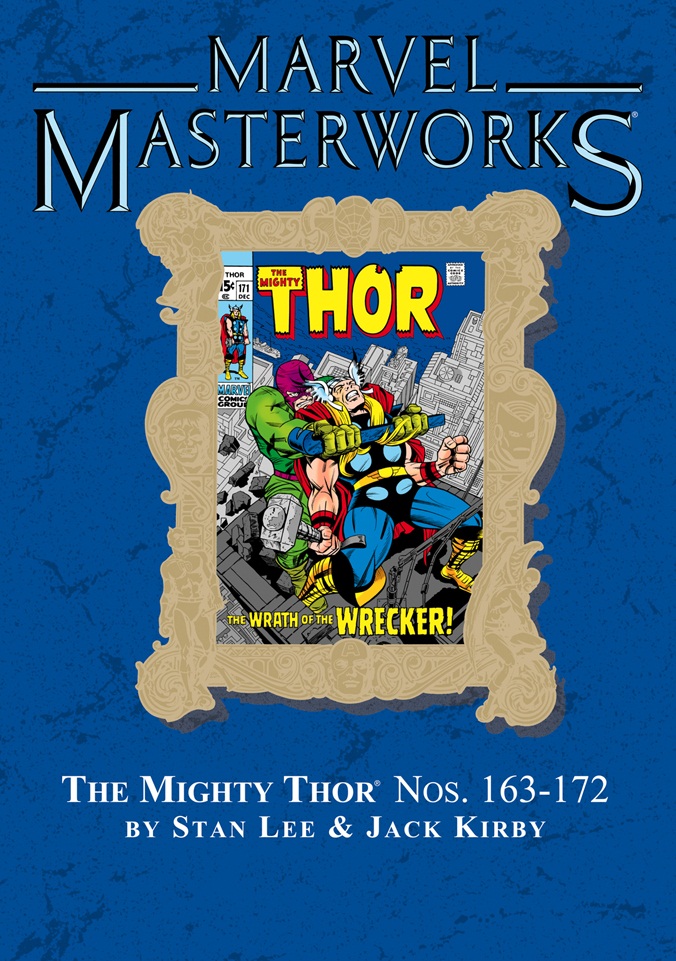 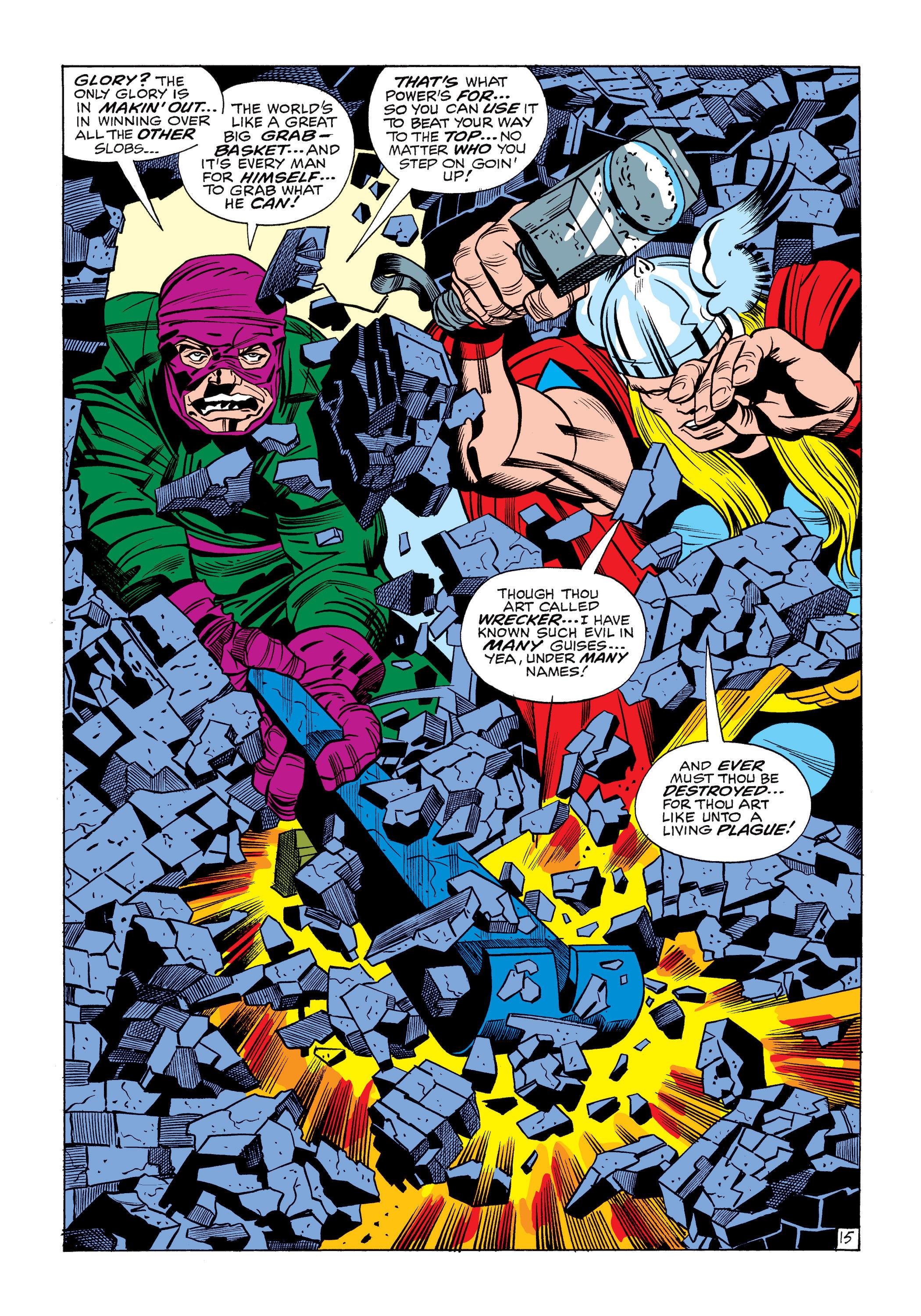 After the magnificence of the previous volume, this collection of material from 1969-1970 slips down a few notches, and it’s impossible to escape the conclusion that it reflects Jack Kirby’s growing disenchantment with Marvel and with Stan Lee. Kirby had at least co-created much of the Marvel universe to 1969, but the public associated Lee’s name with the characters, and while the art never slips, the plots reflect a growing disinterest. Kirby’s always professional, but the spark is missing from much of the content.

There’s a perfunctory encounter with Pluto, followed by two chapters of mundane battle with Him (later Adam Warlock), whom Kirby had introduced in the Fantastic Four and here returns as his idealised perfect specimen of humanity. He randomly selects Thor’s girlfriend Sif as a mate, and Thor’s not happy. Neither is Odin, who tasks Thor with learning the origin of Galactus. This sequence should be the book’s masterpiece, Kirby detailing the origin of a near omnipotent and tragically flawed character, yet it’s untidy to say the least, and to label it lacklustre wouldn’t be be an overstatement. A briefer origin for Galactus appeared in the previous volume, and this provides nothing new, subplots are sidelined, and despite some great art, it’s anti-climactic.

The same might be said about the following battle with the Thermal Man, another seemingly omnipotent creation all too easily seen off in the end, and a return for the Wrecker, but the book ends with rather a gem that’s barely recalled. Billionaire Kronin Krask is now elderly and determined to thwart death in an exaggerated morality melodrama. Rather than feeding on the previous work, it has more in common with the type of story Kirby would occasionally produce during his late 1970s return to Marvel about an inordinately selfish man uncaring about the wellbeing of others. It’s neatly plotted, returns Don Blake/Thor’s first love Jane Foster, and is surprisingly brutal at the end in separating man from God and mortal from immortal.

Before you take away the opinion that this is all substandard, however, you should look at the art. There’s a massive irony in play: just as Kirby’s plots start slipping his art looks better than it has done over any of the previous Thor Masterworks. This is because midway through the book Vinnie Colletta steps down as inker leaving George Klein, then Bill Everett to ink Kirby’s pencils. Both restore some raw power continually diminished by Colletta. As the sample page inked by Everett displays, there’s a greater understanding or sympathy for what Kirby’s trying to do. And Kirby might be losing interest overall, but the art at first can fool you into thinking this isn’t the case. Much the same applies to volume nine.

Once again, Lee’s dialogue is polished and self-aware and adds an extra layer overall. The material is also available in the Epic Collection To Wake the Mangog, and in the third Mighty Thor Omnibus. Alternatively, there are reprints in black and white spread over Essential Thor 3 and 4.