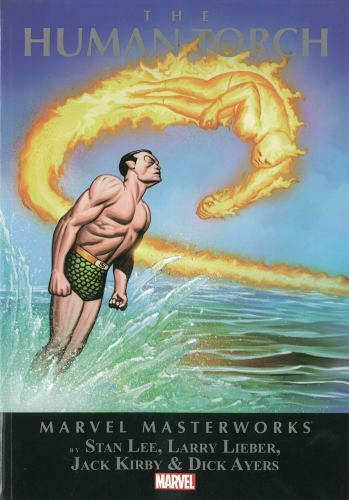 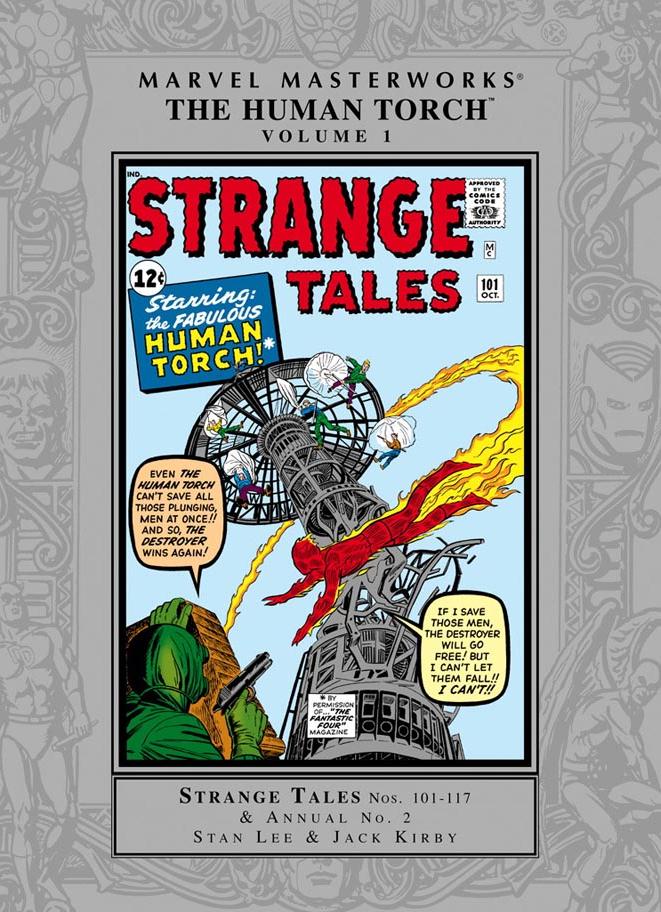 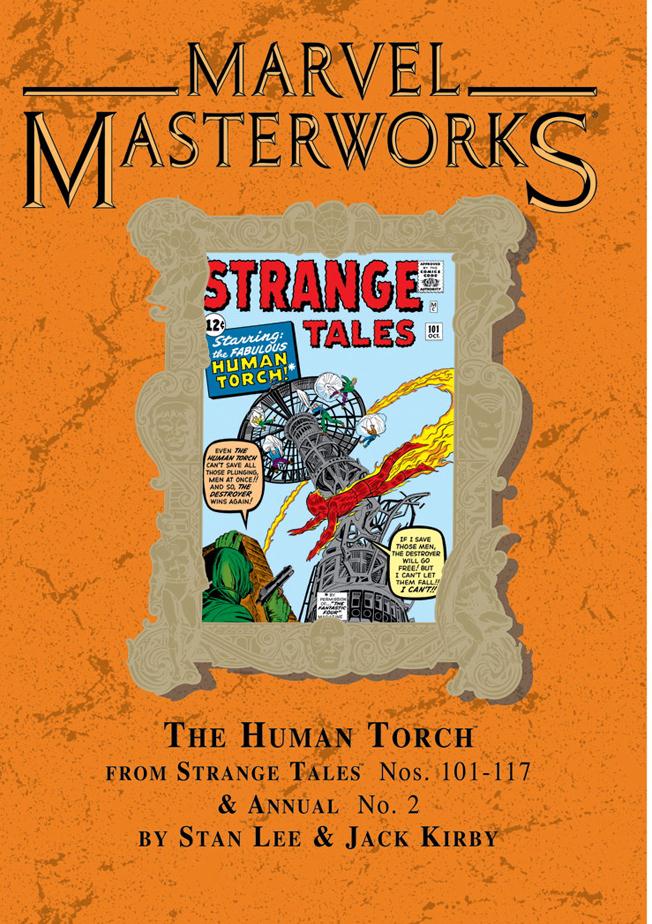 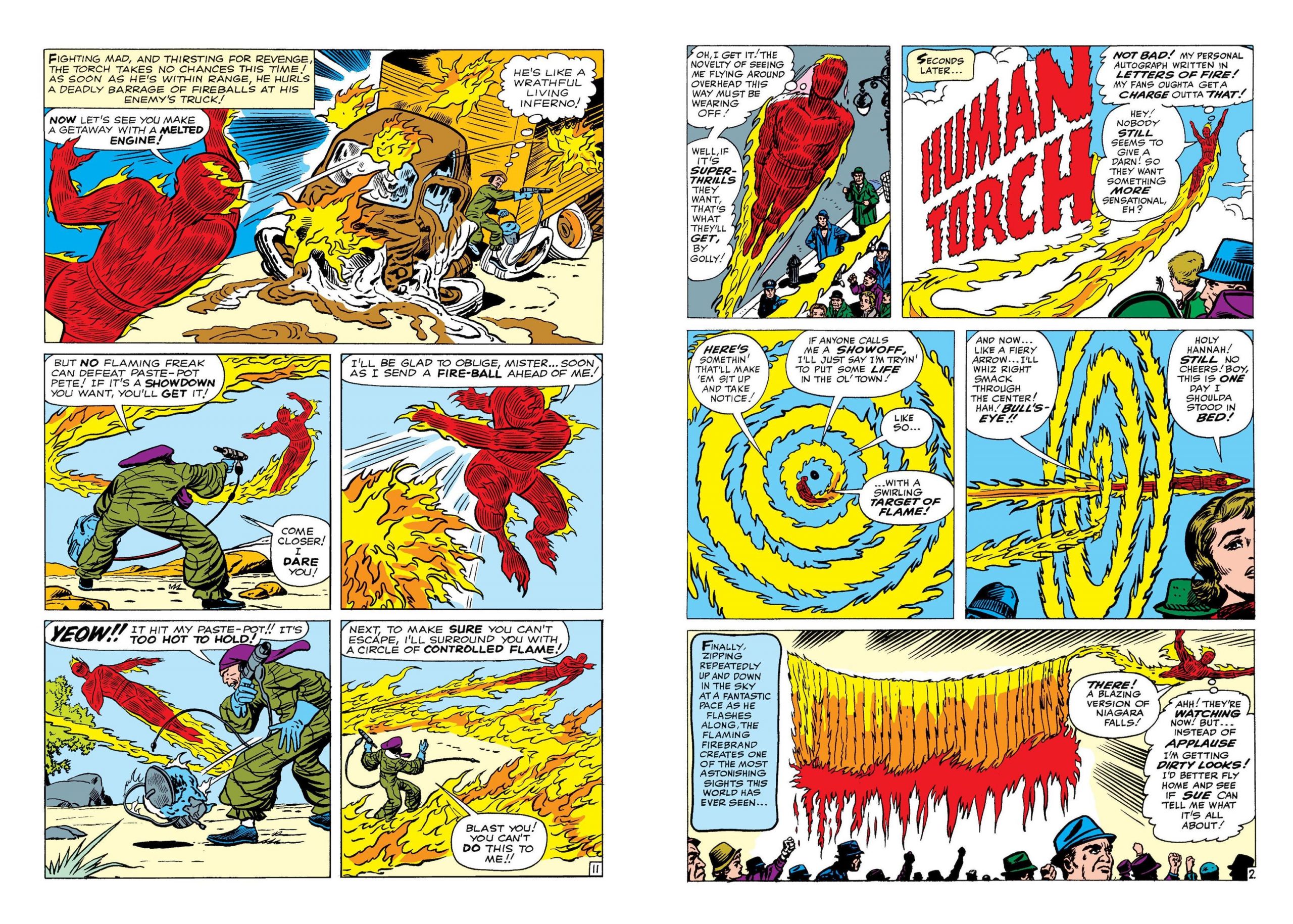 Within a year of the Fantastic Four’s launch, mostly-typical teenager Johnny Storm started an ancillary solo career. First scripted by Larry Lieber (over a plot by brother Stan Lee) and spectacularly illustrated by Jack Kirby (sample art left), the plucky lad discovers Commie-conniving, but this soon switched to super-villain battles, with no less than five regular villainous mainstays introduced in the series. The first appears in‘Prisoner of the Wizard’, in which a spiteful, publicity-hungry intellectual giant is determined to crush the Torch to prove his superiority.

The same creative team produce captivating sci-fi classic ‘Prisoner of the 5th Dimension’, wherein Johnny defeats an imminent invasion before easily trashing adhesive-toting adversary ‘Paste-Pot Pete!’ (later revamped as the terrifying Trapster). He then teams with sister Sue to tackle the perilous ‘Return of the Wizard’.

When Kirby moved on, Dick Ayers assumed full art duties (sample right) with a Lee and Lieber yarn that has Carl Zante AKA the Acrobat knocking on Johnny’s door to offer him a better-paying gig. In ‘The Threat of the Torrid Twosome’, the kid’s head is swelled and swayed, but he’s been played by a master conman and diabolical bandit. This first hint of tongue-in-cheek whimsy presaged an increasing lightness of touch that would come to characterise the Marvel style as much as the infighting between team-mates.

For Lieber’s last story Ayers draws a splendid punch-up with the ‘Sub-Mariner’, a tale reminiscent of the spectacular and immensely popular 1940s battles of their publishing forebears. Veteran writer Robert “Berns” Bernstein scripts the next two – frankly daft – sagas over Lee’s plots, but the saving grace of both ‘The Painter of a Thousand Perils!’ and ‘The Sorcerer and Pandora’s Box’ is the brief return of Kirby as penciller.

H.E. Huntley (Ernie Hart) typed the words for Ayers to illumine in ‘The Human Torch vs. the Wizard and Paste-Pot Pete!’, a cunning clash presaging the villains’ evolution into FF’s evil counterparts the Frightful Four. The Torch makes short work of ‘Fighting to the Death with the Asbestos Man!’, after which Superman’s creator Jerry Siegel (under pen-name Joe Carter) introduces murderous electrical marauder the Eel. He accidentally swipes and activates a miniature A-Bomb in tense, multifaceted thriller ‘The Human Torch Faces the Threat of the Living Bomb!’

A highlight is ‘The Human Torch on the Trail of the Amazing Spider-Man!’, a terrific Lee/Kirby romp detailing how the wall-crawler is framed by an international art thief. Then “Carter” creates another long-term, always-employed villain in ‘The Coming of the Plantman!’

Lee and Kirby’s ‘The Human Torch meets… Captain America!’ was a game changer. It features the return of Captain America, or at least an impersonation. Here’s a quote from the last panel: “You guessed it! This story was really a test! To see if you too would like Captain America to Return! As usual, your letters will give us the answer!” How did that turn out?

Lee is full scripter from ‘The Sandman Strikes!’, wherein Johnny impersonates Spider-Man to defeat granular gangster Flint Marko, after which the Torrid Teen and team-mate Ben Grimm battle each other while ‘In the Clutches of the Puppet Master!’

Ending this initial offering is ‘The Return of the Eel!’ The vengeful reprobate proves more of a challenge this time, thanks to some careful planning and Johnny’s own impetuosity.

Filled with fabulous classics of old school Marvel Fights ‘n’ Tights mayhem and mirth, this compendium is a perfect antidote to angst overload, but never hits the Marvel heights. A second Masterworks collection follows, or all stories are found in The Human Torch and The Thing. 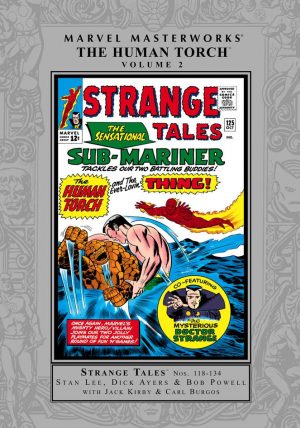 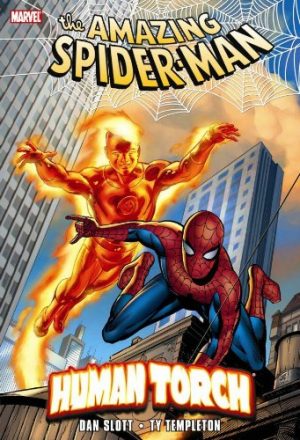 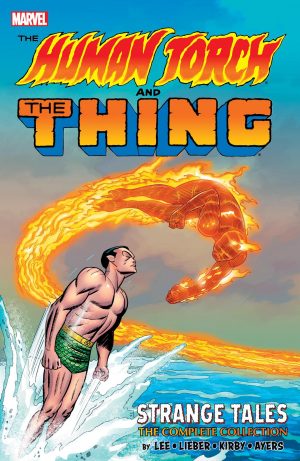 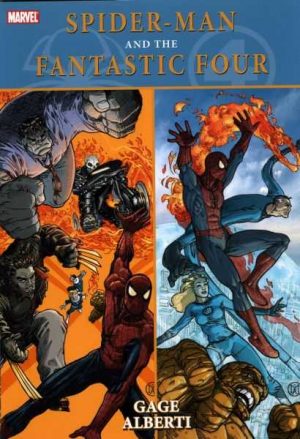 Spider-Man and the Fantastic Four