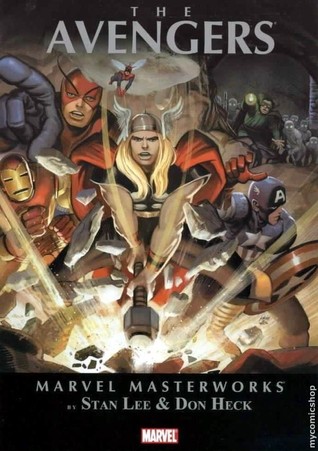 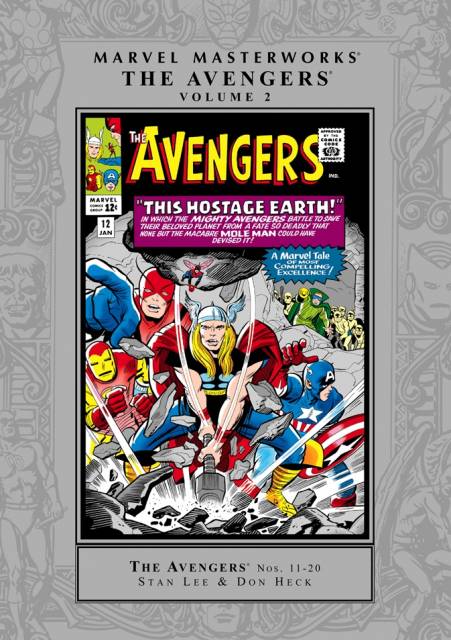 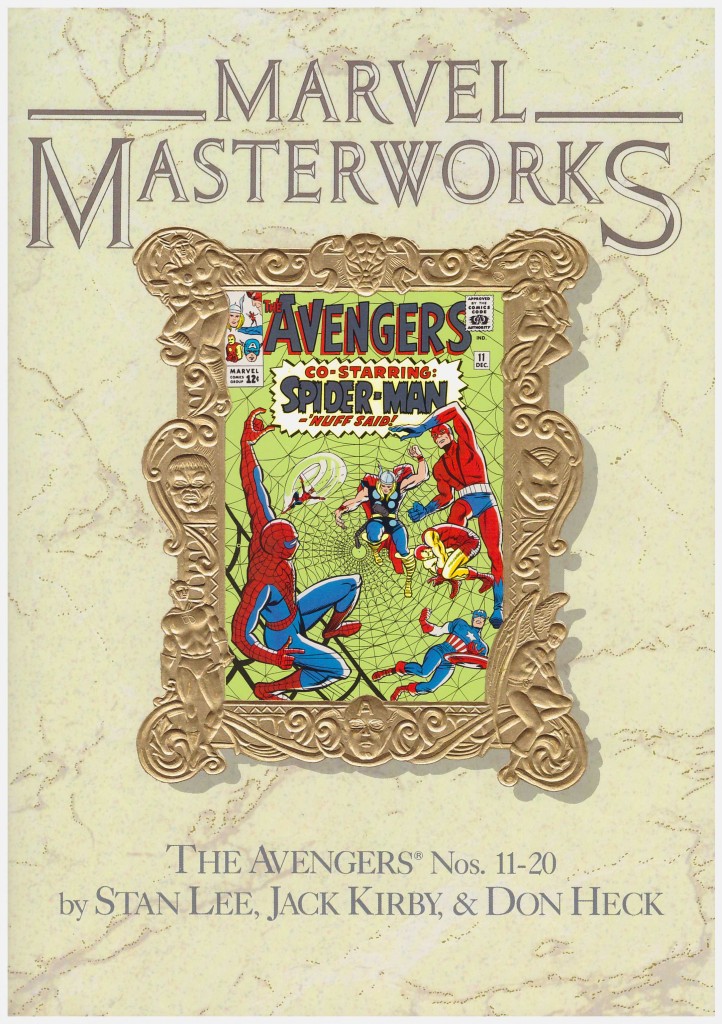 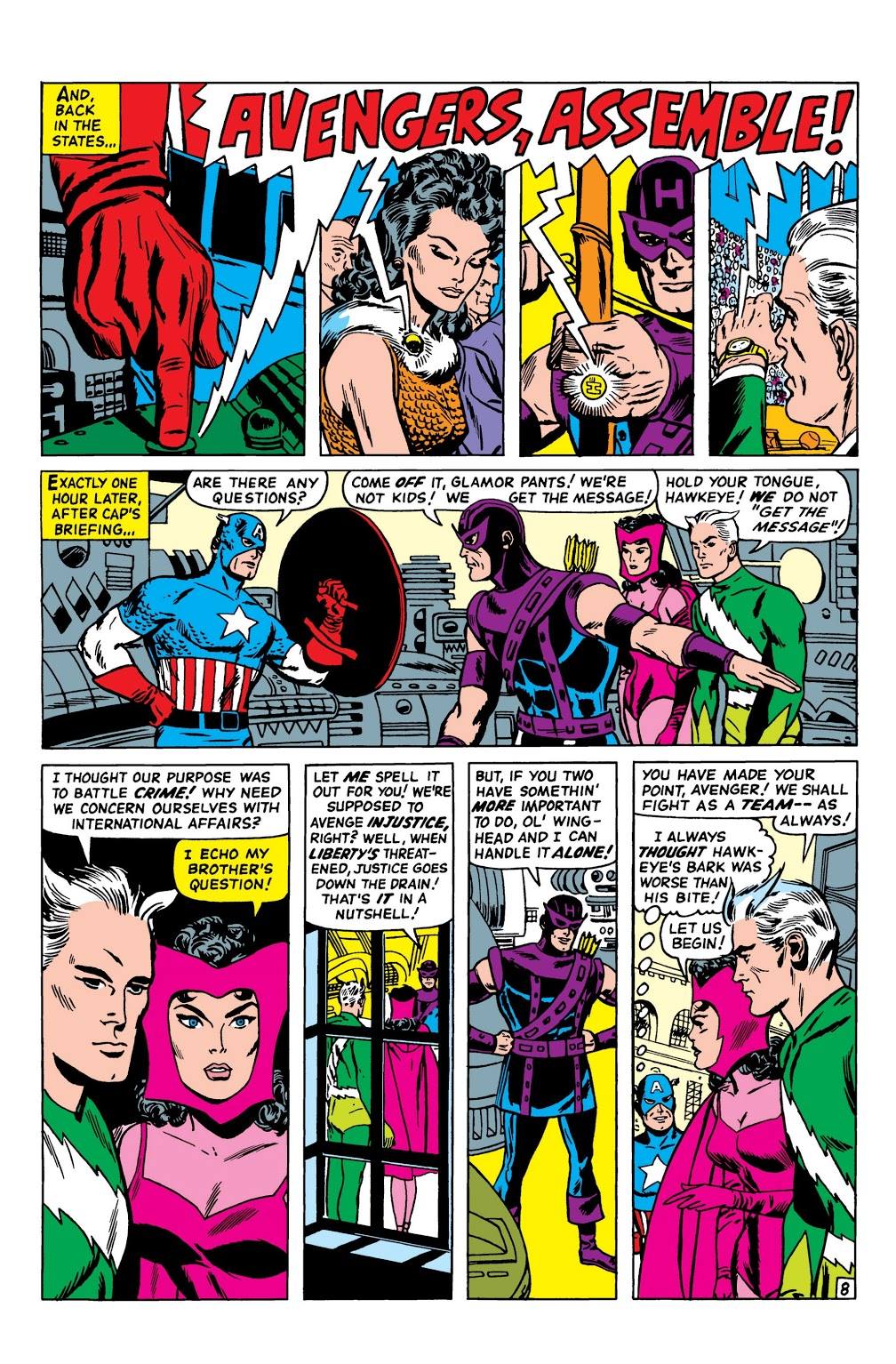 This volume covers most of The Avengers‘ second year, from the end of 1964 to the autumn of 1965. It’s pretty much entirely the work of Stan Lee and Don Heck, with Jack Kirby supplying layouts for a few stories in the middle of this run, over which Heck pencilled, the exception being one issue where Dick Ayers finished the job. Kirby also draws all the covers in this period.

The opening stories are the same pedestrian quality that marred most of volume one. There’s some tension when the Wasp is shot (off panel), but otherwise it’s committee meetings and dull villains all the way. The most interesting point for later Avengers lore is the first appearance of Count Nefaria, but he’s always been boring and unsuited to the Avengers.

Then, in the middle of this run, Lee surprises. All four remaining original Avengers – Giant-Man, Iron Man, Thor and the Wasp, take leaves of absence and Captain America is left with their replacements, Hawkeye, Quicksilver and the Scarlet Witch. This was a bold move for a number of reasons. Avengers had been conceived as a series teaming characters with their own titles – getting rid of most of them might potentially hit the title’s sales, since there was no longer the same crossover potential. And all of the new Avengers had previously been villains, albeit at the more moral end of the villainous spectrum. It’s hard to imagine a 1965 Justice League of America story where Batman, Superman and Green Lantern quit, to be replaced by Catwoman, Bizarro and Captain Boomerang – or at least not one where it wouldn’t be revealed to be an imaginary story or a plot by Brainiac. It also seemed odd in story terms, as – and this is constantly harped upon in the stories – this removed all the physically powerful members of the Avengers, and replaced them with supposedly far less powerful individuals. Not for nothing is this team of Avengers referred to as “Cap’s Kookie Quartet”.

Of course, the Scarlet Witch’s mutant ability to manipulate probability actually means that she can reshape reality to her own will. But in 1965 no-one had thought through the full implications of this. Plus she couldn’t be really powerful, because she was A Girl.

It turned out that this move was exactly the boost Avengers needed. The weaker team meant menaces were now a greater challenge and stories could no longer be resolved simply by Thor hitting something. With only Captain America having his own series, and that being at the time set during World War II, all problems keeping track of continuity were removed. Furthermore, character development within the series was now possible, including actual personality clashes between members of the Avengers, something previously absent. In response, and apparently freed of the need to draw like Kirby, Heck’s artwork improves considerably.

There are still rubbish stories. A particular example is Captain America alleviating his boredom by taking the Avengers to overthrow a Communist government in south-east Asia, sadly not intended satirically. On the other hand, there’s a good two-part story that introduces Hawkeye’s mentor (and future Avenger), the Swordsman. If Avengers has yet to achieve its full potential, it is at least in these stories heading in the right direction.

Unless you’re really bothered about colour, however, it’s probably best to experience these stories through the considerably cheaper Essential Avengers volume one.