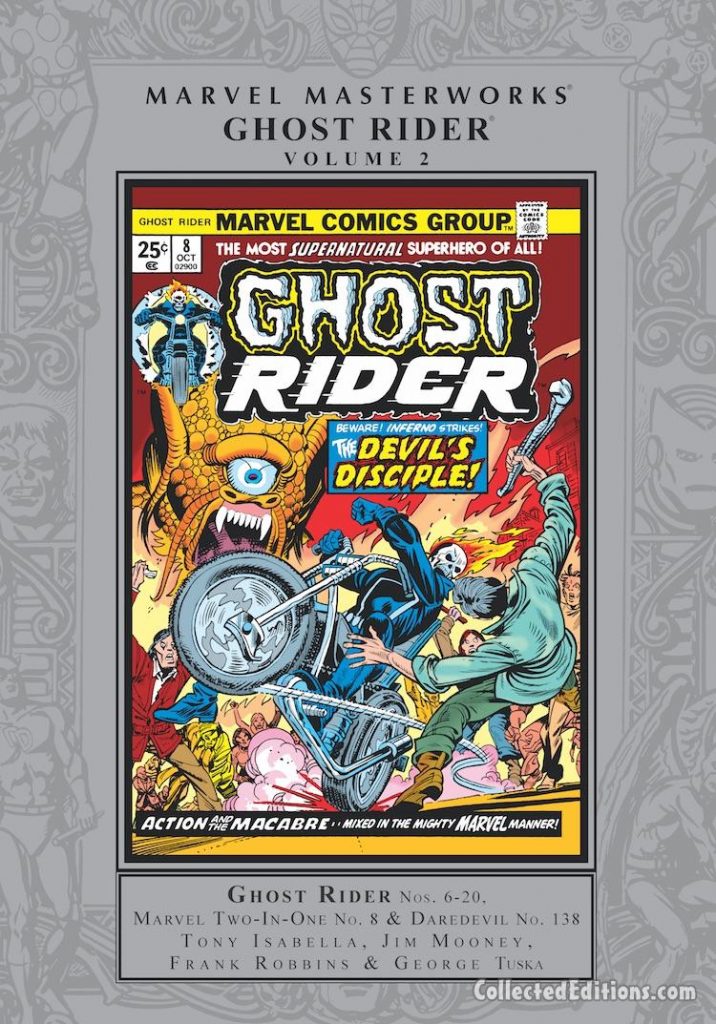 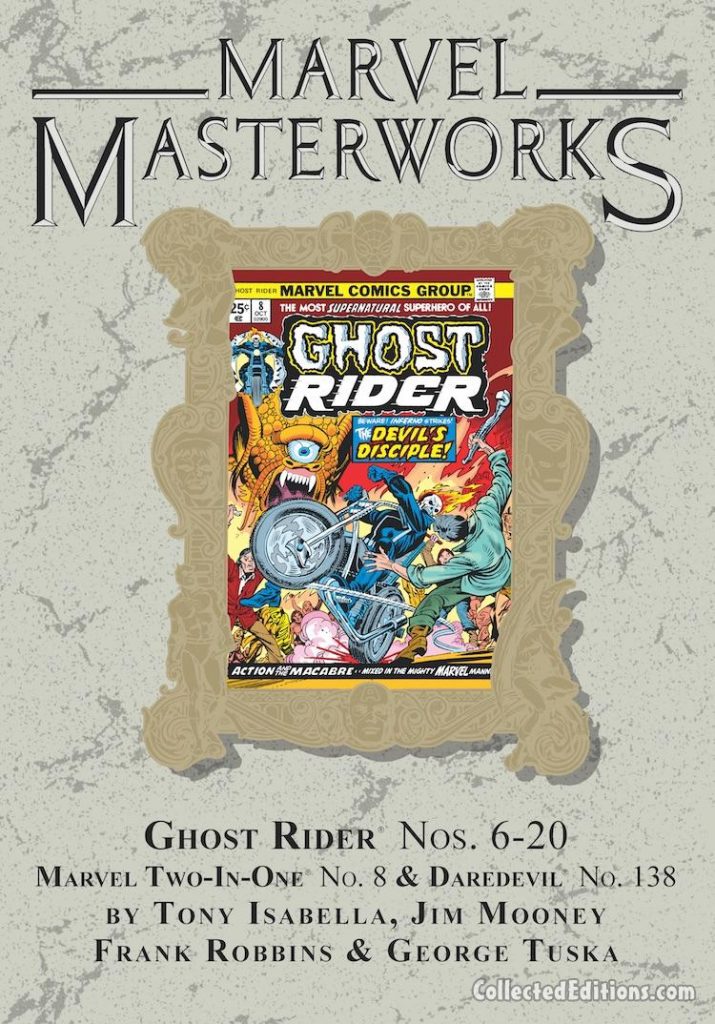 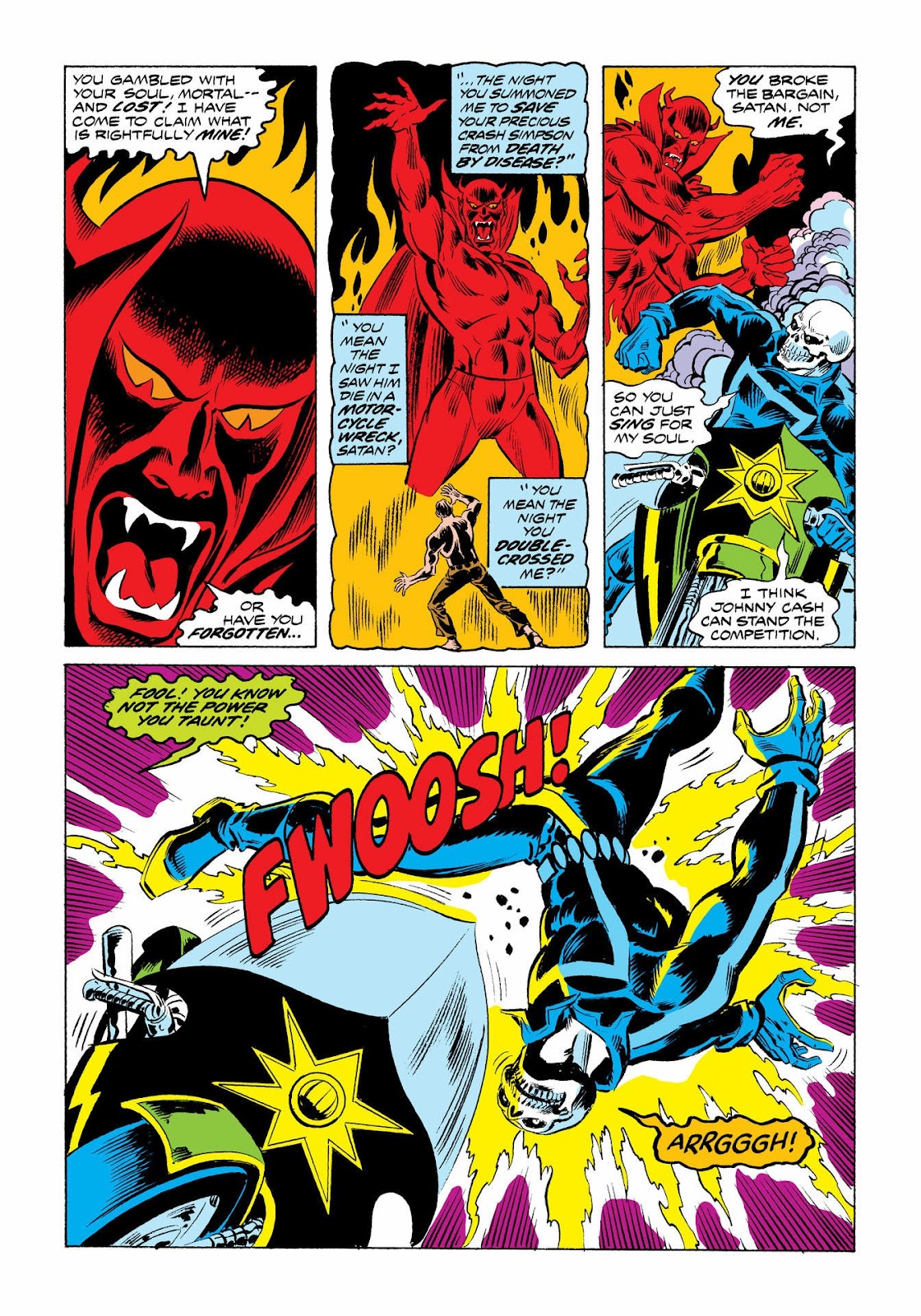 Volume 1 saw circus stunt rider Johnny Blaze transformed into the Ghost Rider after sundown, with a body that burned with the fires of Hell. This sturdy hardback and equivalent digital compendium collects more of those early flame-filled exploits spanning June 1974 to June 1976.

Creative team Tony Isabella, Gary Friedrich and Jim Mooney (sample art) hit the kickstart here with a perhaps ill-considered attempt to convert the tragic haunted biker into a more conventional superhero. ‘Zodiac II’ sees Blaze stumble into a senseless fight with a man possessing all the powers of the Avengers’ astrological arch-foes. However, there’s a hidden Satanic component to the mystery as Blaze discovers when reformed super-villain turned TV star Stunt-Master turns up to help close the case in ‘…And Lose His Own Soul!’

A final confrontation – of sorts – then begins as ‘Satan Himself!’ comes looking for Johnny’s soul, with a foolproof scheme to force virginal girlfriend Roxanne to rescind her protection. She finally does so as the Hell-biker battles Inferno, the Fear-Demon and most of San Francisco in a game-changing epic called ‘The Hell-Bound Hero!’. Here Blaze is finally freed from his satanic burden by the intervention of someone who appears to be Jesus Christ.

Backwriting and retcons notwithstanding, the Christian boycotts and moral crusades of a later decade compelled the criticism-averse and commercially astute corporate Marvel to “translate” the biblical Satan of these early tales into generic and presumably more palatable or “acceptable” demonic creatures. However, these volumes restore the original Biblical trappings. If that offends you, stay away.

Next up is Johnny meeting Marvel mainstays. As Johnny joins a disparate band of dirt-bikers in a desert race, he collides with the legendarily solitary and short-tempered Hulk in ‘The Desolation Run’, after which there’s a quirkily compelling Yuletide yarn teaming Ben Grimm with the supernatural sensation. Crafted by Steve Gerber and Sal Buscema, ‘Silent Night… Deadly Night!’ sees the audacious Miracle Man attempting to take control of a very special birth in a modern-day stable. Then the fate of World War I fighter ace Phantom Eagle is revealed. When Blaze tries to rescue a stranger from a ghostly aerial assault, he soon learns he has innocently thwarted justice and helped the warrior’s murderer avoid the ‘Phantom of the Killer Skies’.

The terms of the hero’s ongoing curse are changed again by Isabella and George Tuska in ‘You’ve Got a Second Chance, Johnny Blaze!’, reintroducing Daredevil’s one-time girlfriend Karen Page, involved in a strange kidnap plot. Revenge-hungry nemesis The Orb returns in ‘A Specter Stalks the Soundstage!’ Whilst hanging out on the West Coast Blaze joins new superteam the Champions, but they play no part in Bill Mantlo’s fill-in yarn ‘Blood in the Waters’, as the Ghost Rider oh, so topically tangles with a Great White Shark in the gore-soaked California surf.

‘Prelude to a Private Armageddon!’ sees a team-up with the Son of Satan, which continues in ‘The Salvation Run!’ as Blaze must race through the bowels of Hell and relive his own traumatic past. He finally saves the day and his own much-tarnished soul in ‘Resurrection’.

The mystery of Karen’s attempted abduction percolates through the subplots before being resolved in ‘Where is Karen Page?’, as Marv Wolfman and John Byrne concoct a two part teaming with Daredevil.

Plagued by artistic inconsistency, these tales are about the real-deal Infernal Realm and a good man struggling to save his soul from the worst of all bargains – as much as the revised Comics Code would allow. They’re also available in black and white as Essential Ghost Rider. 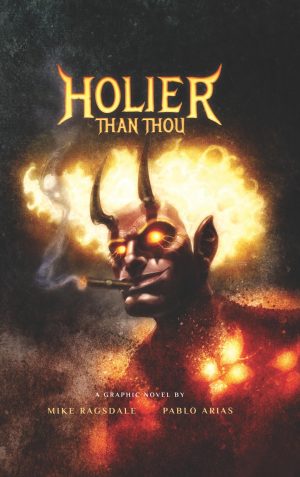 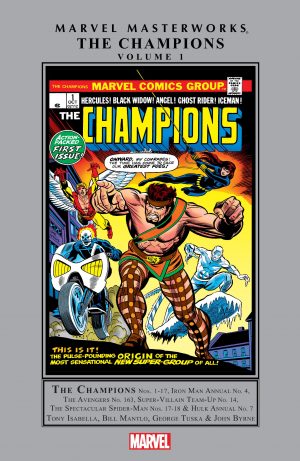