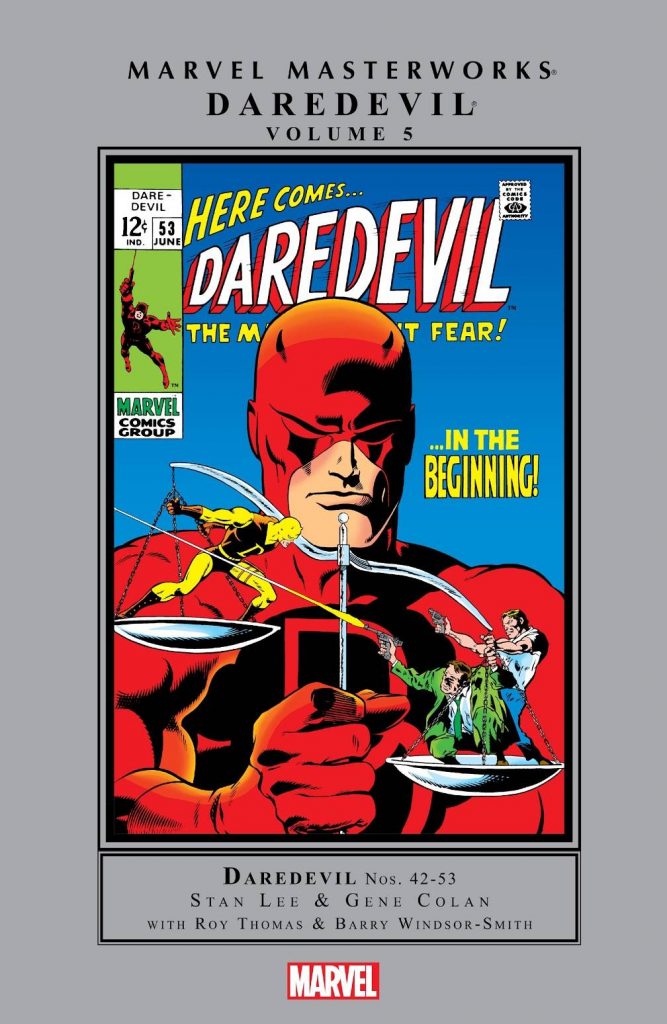 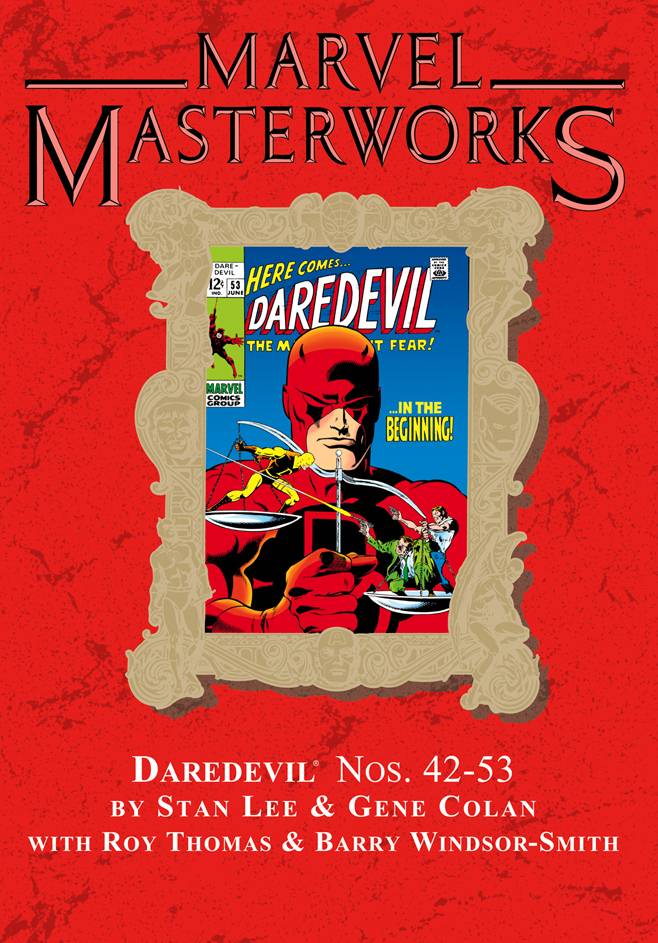 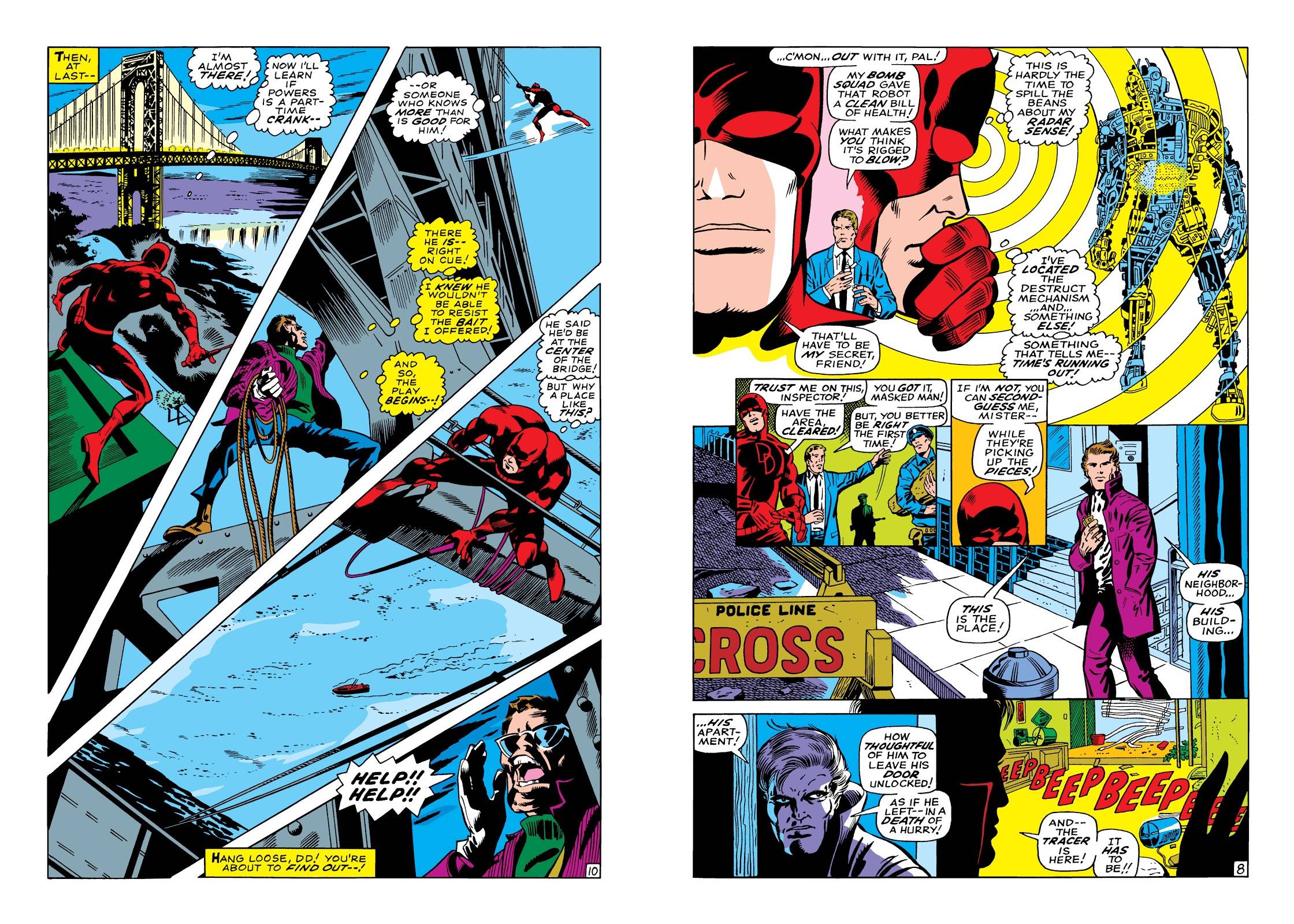 Daredevil’s exploits from July 1968 to June 1969 are covered in this tumultuous collection capturing the significant moments and radical shifts in treatment and content as Stan Lee surrendered the scripter’s role to Roy Thomas. Following a fascinating introduction from Gene Colan, an aura of barely-contained, ever-escalating madness increasingly permeates the soap opera narrative beats, peerlessly pictured by his own astounding illustration – as well as a powerful interlude by promising fill-in artist Barry Smith.

Having killed his fictitious alter ego twin brother Mike Murdock (see volume four), Matt briefly considers hanging up his scarlet long-johns, but eventually retains his secret other-life by “revealing” to girlfriend Karen Page and closest friend Foggy Nelson that Mike was only one of a number of Men without Fear. That’s in the first part of a prolonged battle with a new nemesis. ‘Nobody Laughs at The Jester!’ introduces a gag-themed criminal who initially only wants to be more successful than his previous career as a bit-playing actor. His motivation changes when he’s hired to spoil incorruptible Foggy’s campaign for the position of District Attorney. It eventually stretches to five episodes as the role grows and the mission creeps. A temporarily befuddled DD is ‘In Combat with Captain America!’ before Hornhead is framed and becomes a wanted fugitive, leading to the thoroughly enthralling conclusion of ‘The Final Jest!’ With this episode, inker George Klein begins his long and impressive association with Daredevil.

A story involving the then raging Vietnam War was inevitable, but thanks in great part to Colan’s input, ‘Brother, Take My Hand!’ was much more than a quick cash-in or well-meaning examination of contemporary controversy. Marvel developed a strong and admirable African American character, one of far too few in those blinkered times, in newly-blinded veteran Willie Lincoln, who turns to Murdock and Daredevil for help on his return home. A disgraced cop framed by gang-boss Biggie Benson before joining the army, Lincoln is determined to clear his name at all costs. This gripping, life-affirming crime thriller not only triumphs in Daredevil’s natural milieu of moody urban menace, but also sets up a long-running plot that would ultimately change the Man without Fear forever.

Lee’s final script begins another epic over several chapters. ‘Daredevil Drops Out’ has Murdock targeted by a robotic assassin built by Mad-Scientist-for-Hire Starr Saxon. This tense, action-packed thriller grows into something special with second chapter ‘If in Battle I Fall…!’ as neophyte penciller Barry Smith steps in, ably augmented by veteran inker Johnny Craig. Colan had been shifted to draw The Avengers, but would soon return. It’s left to Lee’s protégé Thomas to continue matters, and he’d write Daredevil for just over eighteen months.

Thomas’ first plot in ‘Run, Murdock, Run!’ is a wickedly engaging, frantically escalating psychedelic thriller with a surprise twist. The saga climaxes in stunning style on ‘The Night of the Panther!’ as African Avenger Black Panther joins the hunt for an out-of-control Daredevil. A radically unsettling ending blows away all conventions of the era’s traditional superhero melodrama and can still shock today. After that Thomas offered ‘As it Was in the Beginning…’ reprising, revising and expanding Lee and Bill Everett’s origin script, allowing the troubled hero to reach a bold decision, executed in the next volume.

Adding extra value and ending on a comedic note, is a pertinent parody by Lee and Colan as Splat Murdock – AKA Scaredevil – endures moments of hilarious existential angst and an identity crisis whilst being ‘Defeated by the Evil Electrico!’, concluding and complimenting a bonanza of bombastic battle tales. They’re available in black and white spread over Essential Daredevil Vol. 2 and Vol. 3.