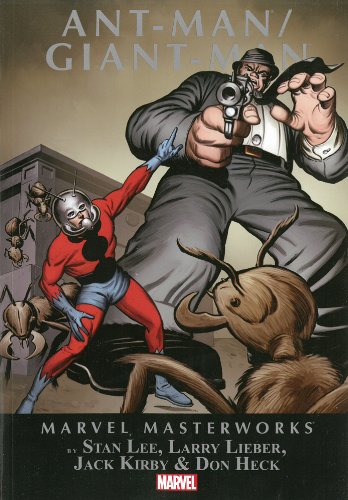 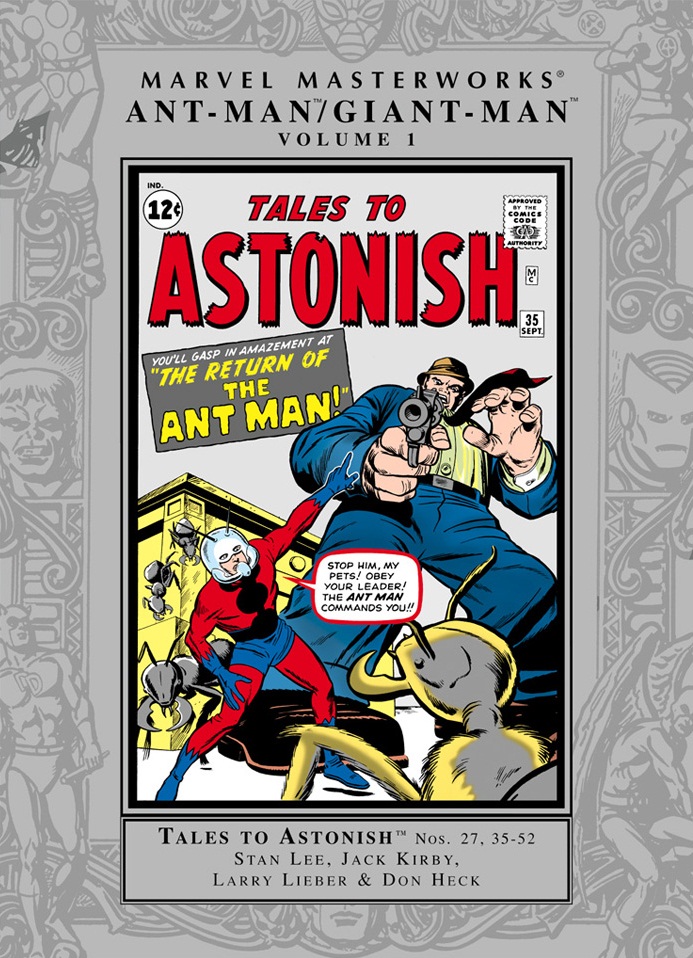 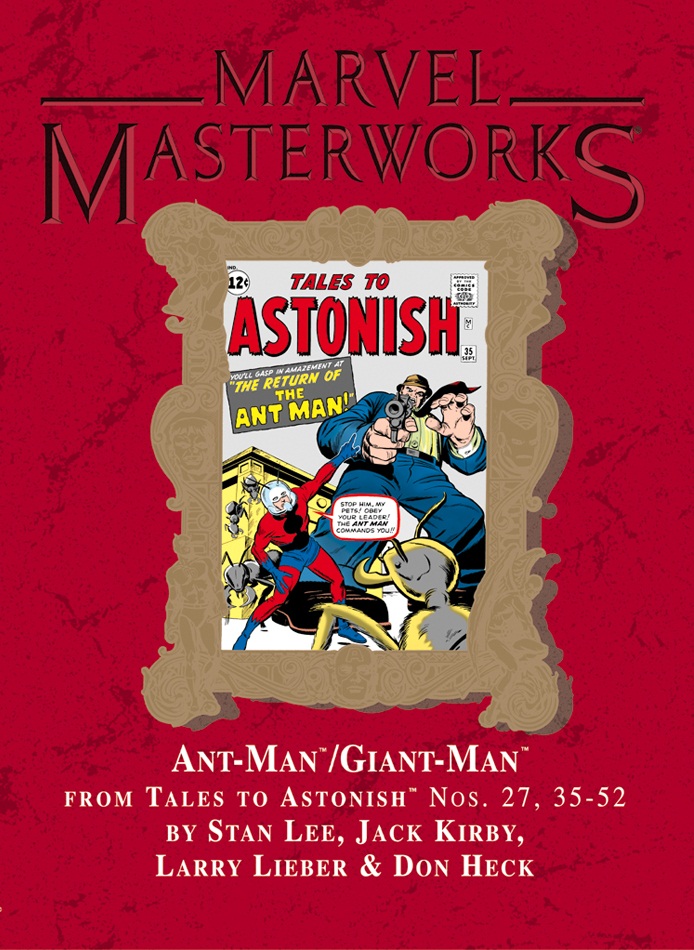 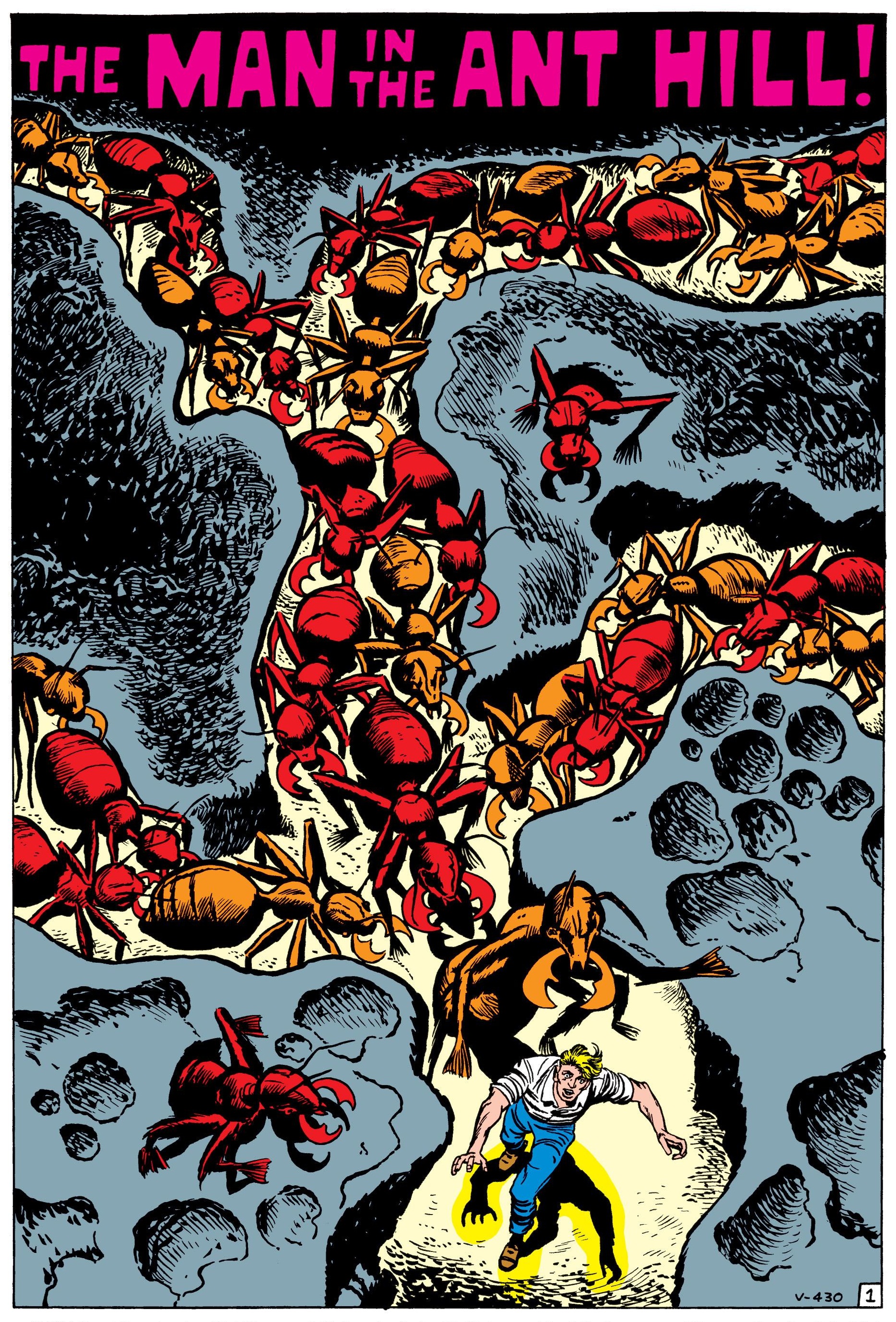 Four years after first issuing the earliest Ant-Man material in a black and white Essential edition, Marvel followed up with two hardcover graphic novels presenting the same material in colour on durable paper stock. Other than people who have to buy every Masterworks edition, it’s difficult to consider who the audience might be. Anyone lacking the fondness of reading these stories when they grew up will find most dull, predictable and hacked out. And that’s just the better material.

It’s difficult to find any redeeming features. The origin story in which scientist Hank Pym develops a formula enabling him to shrink to the size of an ant has some nice art from Jack Kirby, who brings home the 1950s style monster movie feel complete with quite a sinister Pym. Beyond the splash page, though, and a nifty helmet design, his contributions to Ant-Man are hardly prime Kirby. He’s never less than professional, but doesn’t appear enthused.

The stories feature the same standbys as other Marvel material of the early 1960s, although nowhere near as adroitly carried out. We have gangsters, agents of communist countries intent on undermining the American way of life, and mad scientists. They appear in preposterous stories in which women masquerade as men for no good reason, being washed down a drain is a serious threat to a superhero, and a giant pink beetle with a passion for monologuing attempts to seize control of Earth. Stan Lee and Jack Kirby are on autopilot, but when the strip is turned over to others, difficult as may be to believe, it deteriorates further. There are good ideas, such as Larry Lieber’s villain who accelerates time in a localised field, but they’re always reduced to the most obvious application. There’s never any real sense of wonder.

The introduction of the Wasp is a good idea, if only to prevent Ant-Man having to explain the plot to ants every episode. From a 21st century perspective her impulsive personality could come across as patronising on the part of the creators, but then that has to be viewed in the context of a strip in which a scientist with the personality of parsnip lectures on women being obsessed with the way they look. Very late in the material collected here there’s a further breakthrough when it occurs to Lee that the gas Pym uses to expand from Ant-Man size to standard human could have another application, and Giant-Man is born. This is in a tale graced by an alien whose hands erase people and objects from reality one sweep at a time.

In terms of art, the best in the book is the combination of Jack Kirby’s powerful pencils inked with some delicacy by Don Heck. That combination is applied to the introductions of the Wasp and Giant-Man, making them the standout material. Elsewhere, Heck’s not motivated by superheroes, science fiction or monsters, but give him a New York street scene to illustrate and he’s great. Had that only been the purpose of the strip…

A second Masterworks collection mops up the remainder of this mediocre material, now concentrating on Giant-Man. For the curious not wanting to spring for an expensive hardcover the content of both books is now also available as an Epic Collection titled The Man in the Ant-Hill. 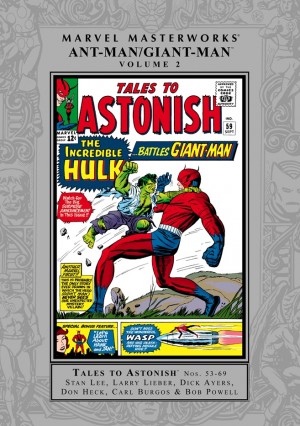