Marvel Epic Collection: Master of Kung-Fu – Weapon of the Soul 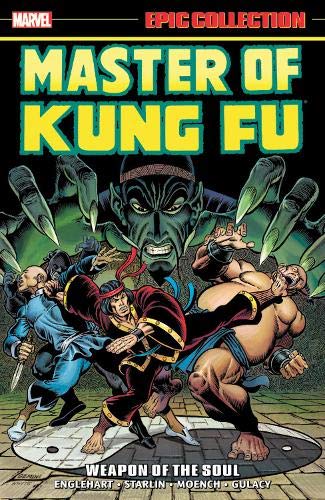 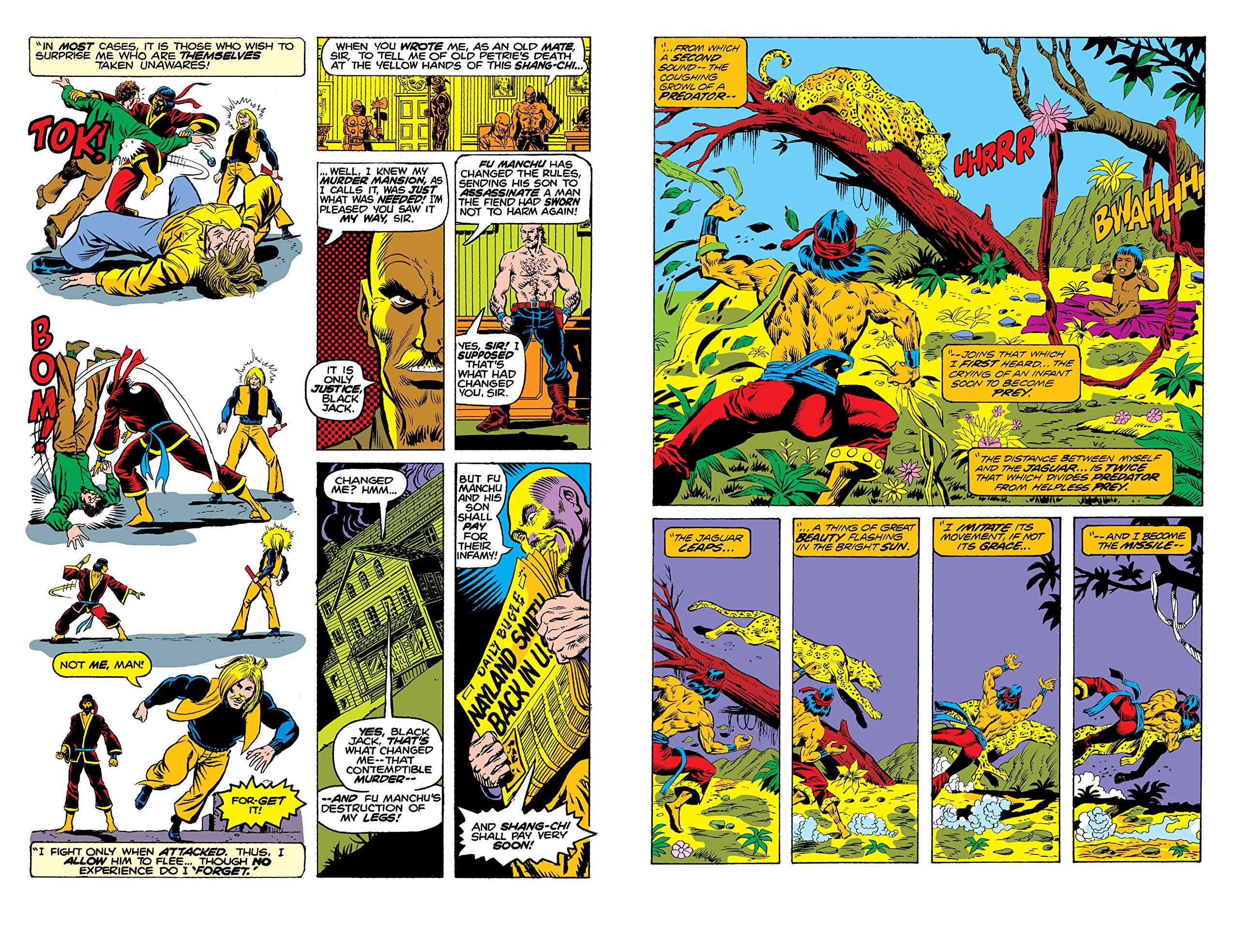 Weapon of the Soul repackages the same content as the hardcover Master of Kung-Fu Omnibus Vol. 1. The series was conceived when Enter the Dragon was a surprise box office smash, and David Carradine’s Kung-Fu TV show was topping the ratings, yet was still being published a decade later.

It’s long-forgotten now, but it was the enthusiasm of Steve Englehart and Jim Starlin (sample art left) that sparked the original series, accepting an editorial suggestion that they graft kung-fu action to characters from Sax Rohmer’s novels, to which Marvel had recently acquired the rights. Fu Manchu become father to Shang-Chi, a teenage kung-fu prodigy raised to become his father’s perfect assassin. This didn’t work as planned, and he instead joined the forces of British spy organisation MI6, headed by Sir Denis Nayland Smith. The creators also supplied Black Jack Tarr, MI6 operative, a giant of a man, and one whose brute strength was almost a match for kung-fu. Starlin’s blocky style is surprisingly graceful in defining the lead character, and Englehart’s introduction spirited, but both left the series due to editorial disagreements.

Marvel Comics: The Untold Story reveals these involved increasing the violence at the expense of the spirituality the series creators considered essential. Their successor Doug Moench would eventually return this in spades, but started out as a more compliant writer, and the results are very ordinary. Fu Manchu attempts to destroy Mount Rushmore, or we get kung-fu matched against Amazonian tribesmen. Despite the impressive roster of other contributing artists, only Paul Gulacy stands out, and any wonder in Moench’s earliest material is Gulacy’s developing art. He begins in thrall to the style of Jim Steranko, and for all the learner’s mistakes he makes, there’s a grace and delicacy to Gulacy’s work coupled with increasingly confident page designs, although there’s a variance depending on the work the inker puts in. Previously only ever seen on pulp paper where they impressed, they’re glorious at times when reproduced on quality paper stock.

The material collected here stops just short of Moench and Gulacy’s finest collaborations, but towards the end of the book there’s much to admire. Moench successfully infused the best aspects of spy thrillers with the kung-fu action, and added to the cast in capricious fashion with agents Clive Reston and the alluring Leiko Wu, also very capable.

A playful quality to the material would later disappear. There’s a teaming of Shang-Chi with a never named person bearing an uncanny resemblance to Carradine, a character based on Groucho Marx, and Reston constantly hints at (never named) ancestry of James Bond and Sherlock Holmes. The missions Moench dispatches them on become ever more fantastical, culminating in an entirely artificial funfair island complete with a large eyed robot servant, housing a Bond style criminal mastermind. That’s very satisfying over four parts and the pointer to what would come.

While there are elements of their time, Master of Kung-Fu hasn’t dated as much as other 1970s Marvel product because narrative captions were established from the start in preference to thought balloons. The series highlights begin with the next volume, provisionally titled Fight Without Pity.