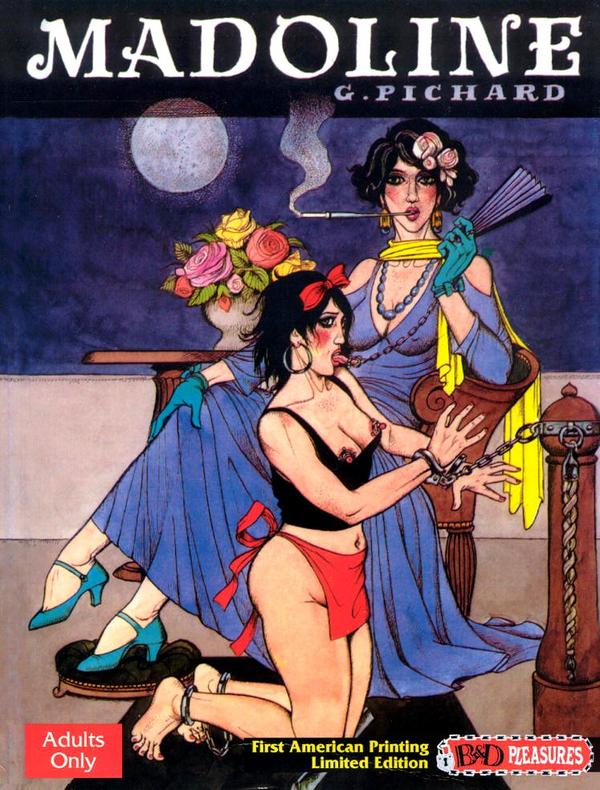 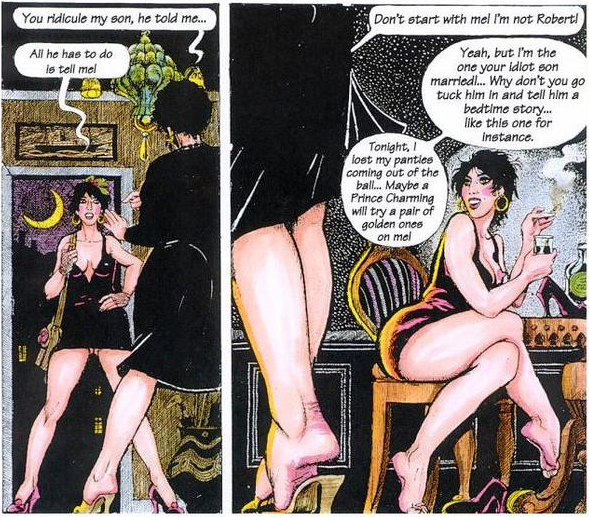 The problem for most people with Georges Pichard is that he was an extraordinary painstaking artist, superb draughtsman, master of rendering, inventive layout artist and sarcastic humourist. Yet his best work involves extreme sexual sadism, usually on or by nuns. As a result he has never really received the recognition he deserves, especially outside France. Get over it, folks! Little of his work is substantial, content wise, yet it does possess a sly, cynical humour, a deep understanding and subtle undermining of the function of sexual fantasy and oh my god is it beautiful. Not to mention technically amazing. While not his finest BDSM work (that would probably be the earlier Marie Gabrielle de St Eutrope, a picaresque, nun-torturing tour-de-force), Madoline is a good taster of both his art and his humour.

Madoline is set in an alternative world where women are punished severely for promiscuousness, having opinions, and generally doing anything that rocks the boat. Madoline herself is married to a weak man who still lives with his possessive and sadistic mother. She conspires to first enslave her daughter-in-law (although Pichard makes it clear that she’s not entirely unhappy about this turn of events) and then have her reported to the authorities as a sexual ne’er do well. Madoline is sexually rapacious, open to all sorts of experience, and there is a nod and a wink complicity between reader and characters as she is screwed and tortured in a convoluted prison system that makes no sense – Kafka with whips, you might say.

Pichard draws beautiful, voluptuous women, and largely caricatured and often grotesque men. He has an excellent grasp of expressive posture; every line of the weak-willed husband screams ‘drip’, while Madoline’s mother in law’s body language is menacing, predatory and slightly mad. His work has its own particular style, which sadly few artists have drawn from, using detailed hatching techniques to create a sense of volume that few current comic artists can achieve. The cumulative effect of the inking is heavy and gothic, giving the feel of an 18th century engraving, and a fondness for architectural detail adds to this effect.

Buy it, put your chastity belt on, and just look at the pictures for their spectacular technical control if the content bothers you, but don’t ignore it. The world won’t see another cartoonist with the drawing skills of Georges Pichard in a long time.