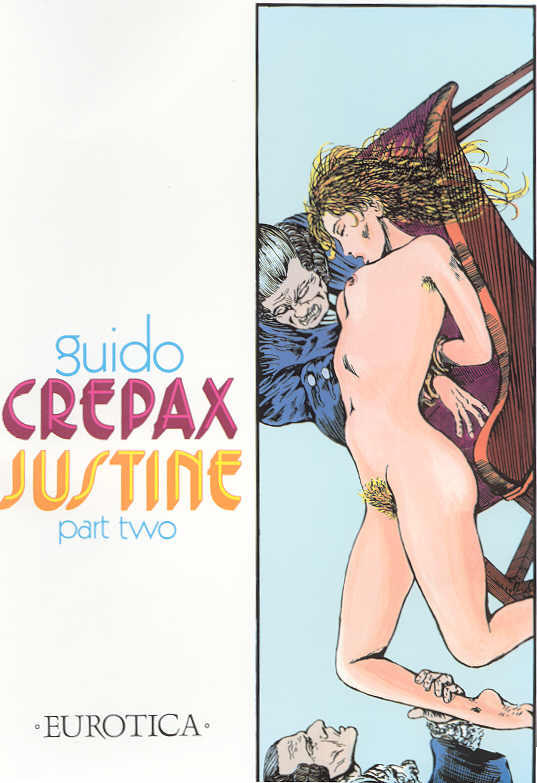 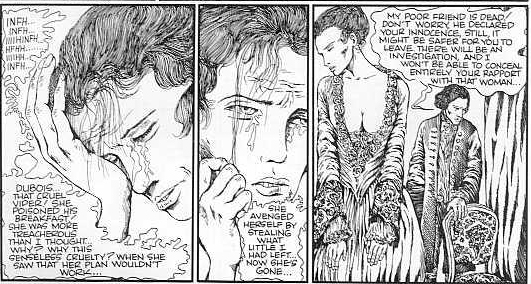 Catalan originally planned to publish Guido Crepax’s delicate adaptation of the Marquis de Sade’s exemplar, Justine, in two volumes. Following Catalan’s collapse, NBM took over and rolled it into their Eurotica line. A more opulent edition is offered by the Taschen hardcover, which also contains Crepax’s adaptation of The Story of O.

Facing the gallows, Justine’s spirit is finally broken and her belief in the innate goodness of man (despite a whole heap of evidence to the contrary) thoroughly crushed. At her moment of moral crisis she is rescued by her sister Juliette, who has become rich and powerful thanks to her vices, and is now able to save her unworldly sister.

All of Crepax’s work is extremely stylized and ornate, with sprawling page layouts and lots of decorative embellishment. By this stage in his career there were few cartoonists able to shepherd their reader through a page as well as he could and few able to draw such gorgeous, elongated women. There are also few who can draw sex so excitingly and innovatively using pattern, ornament and fetishised objects to put the reader in the middle of the indulgent and sensual world that overwhelms the characters. If you had to describe his work in one word, it would be decadent.

In adapting de Sade, Crepax removes a lot of the political material and lengthy philosophical arguments, but still retains the central moral and satirical points of the original. De Sade’s pointed and rather bitter sense of humour comes through as well. Crepax is a surprisingly sensitive adaptor of older novels, conveying the atmosphere and tone excellently. His Dracula, sadly uncollected, is one of the best adaptations, and although some may shy away from the subject matter of Justine, it bears close study both for the artwork, especially the page layouts and storytelling, and for the elements Crepax choses to retain from a sprawling and lengthy original.